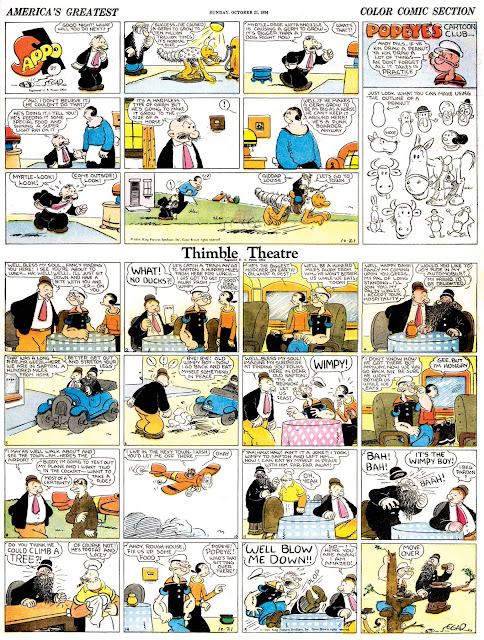 In 2019-20, to celebrate Popeye's 90th birthday, King Features offered an online-only comic strip titled Popeye's Cartoon Club. The strip was written and drawn by various cartoonists, all given free rein to spin Popeye in whatever direction appealed to them. It was great fun, and much enjoyed by comic strip fans.

While the strips were new, the title clocked in at about 85 years old. E.C. Segar offered a few secondary toppers to Thimble Theatre in the 1930s in addition to the long-running Sappo main topper. The original Popeye's Cartoon Club debuted on April 9 1934 and offered advice on learning cartooning. Much of it was of the type, "if you can draw this simple shape, then you can turn it into ..." Segar gave the feature a little more than a year, ending it on May 5 1935, after which he eschewed secondary toppers entirely for the rest of his days on the Sunday strip.

Comments:
Ahoy Allan-
After the cartoon club, for a while, Sappo's strip shrank to one tier, without storylines, and only had Sappo himself "chalk talk" words or initials into full cartoons. It really comes off like a cheap way to dodge work, or something. But by early 1937,Sappo's full strip has come back, leaving cartoons about drawing cartoons behind.
That after his death, Segar's replacements added the extra panel again, now with stuff like
"Wimpy's Who's Zoo", they still never restored the "cartoon club".