March 31 1910 -- It's the Los Angeles Angels' home opener, and Herriman scouts out all the local notables who have come to see the spectacle. Note especially the caricature of Jimmy Swinnerton, who was on hand, looking pretty hale and hearty. Evidently by 1910 his health was much better than in 1906 when Hearst sent him back to California in hopes that he wouldn't die of TB.

A who's who in the strip:

James Jeffries, 1875-1953 at this time the former heavyweight boxing champion, and angling for his comeback in the Fight of the Century with Jack Johnson in July, 1910.

Jack Kipper, 1866-1944, prominent Los Angeles-based boxing promoter, closely connected with the Los Angeles Coliseum. Known for his work with the California Athletic Commission. Described in a 1910 newspaper article as being a sparring partner of Jeffries.

George Alexander, 28th mayor of Los Angeles, 1909-1913; the March 31st edition of the Los Angeles Herald has a photo of Alexander doing exactly what Herriman is showing.

"McGreevy" Listed in the box score for the game as the umpire. The Herald's account of the game doesn't describe a dispute.

Corney Pendleton, Cornelius W. Pendleton (1859-1936) noted Los Angeles politician, who had been a state senator and (briefly) speaker of the California Assembly.

Hen Berry, Henry "Hen" Berry, owner of the Los Angeles Angels baseball team since 1906 -- he would sell the Angels in 1914 and move north to buy the San Francisco Seals, selling them in turn in 1918. Died in an auto accident in 1929.

Luke Kelly, a squib published in the March 24, 1910 Los Angeles Herald's "Rialto Gossip" column identifies him as living in San Pedro (as does Herriman's cartoon) and notes he was a friend of Jim Jeffries and Hen Berry.

"Carlisle" Water "Rosy" Carlisle, 1881-1945, center fielder that day for the Vernon team. The Herald's account of the game doesn't describe any incident involving him. Made an extraordinarily rare unassisted triple play in 1911 for the Tigers (against the Angels), the only recorded for an outfielder in professional baseball. Had a brief MLB career with the Red Sox in 1908.

John Brink, May 1915 obituary in the Los Angeles Herald describes him as a pioneer café owner and sportsman

"Woodill" Could not locate any information.

Al. Levy, 1860-1941, was a well-known restauranteur in Los Angeles. Since 1906, he had owned an eponymous restaurant at 3rd and Main that was known for its opulence.

"Clarence the Undead Berry," Clarence Berry was Hen Berry's brother, an oil speculator, and was the source of Hen Berry's funds to buy the Angels in 1906.

Your Opinion and Suggestions Needed!

Hello, fellow strippers. After a decade and a half hosting this blog here on Google's Blogger interface I have decided that it is time we graduate to adulthood, taking the training wheels off. I have been working with a web developer to move the blog to a new website:

There were a number of improvements I wanted, including a more modern appearance, more robust post searching, the ability to sort posts in multiple ways, and the capability to display an unlimited number of posts on a single page.

Also, I wanted the images to not be monkeyed around with (Google automatically resizes my images to screen size). So now if I feel that an image needs to be larger than screen size, you'll be able to view a larger (and therefore sharper) image. A test of that capability is offered in the topmost post.

The big new feature, though, is that I want to transform my book, American Newspaper Comics - An Encyclopedic Reference Guide, into a web-based reference. And not just that, but present it as a moderated wiki, in which both you and I can update the data with newly discovered information. This is a big job, so don't expect it to show up immediately, but we're going to start work on it as soon as the website is otherwise stable and working properly.

Where You Come In

I have done the basic testing of the website. But you guys use other operating systems, other browsers, and I very much need you to visit the site and let us know if there are any problems. Most of all, we need testers to try the website on their smartphones. I don't do smartphone (yes, I'm officially a Neanderthal) so I need to know if there are any problems when using the website on that ubiquitous device. Even if you DON'T find any problems, it would be great to hear about the device type, OS and browser you used.

Beyond basic testing, I want to hear your suggestions for the website before we go live. Are there features missing that you'd like to see? Anything about the interface that you think ought to be tweaked?

And thinking further down the road, beyond the blog itself, what else would you like to see on Stripper's Guide, especially things that are missing from other sites that are for fans of old comic strips?

Comments:
I use an RSS reader to read the blog. No issues with the new site - easy to add, view is the same, images are OK.

Firefox on a Mac: perfect! Thanks for all your creativity and hard work!

Renders fine in Firefox, Safari, and Chrome on a MacBook Air, but the test post with the wide image displays the image off the right edge of the screen in portrait mode in Safari on an iPhone, while it renders fine in landscape in the same browser/phone. Other images and posts are fine in both.

Thanks Chris and Paul!

Perry, I've sent that problem on to the programmer. Hopefully a simple fix.

I use Chrome on my Android cell phone, and have the same issue with the large image going off the right side of the screen. Also, on the phone, the font is significantly harder to read than what you have been using. Otherwise, I am looking forward to the new and improved site.

Hello Allan-
I've tried the test site, and after the first few subjects posted, the enlargement feature only goes to a dark shade where the enlargement might expand to. Also, though the postings are several months old, the comments don't seem to have followed them.

Was there only one edition of your book, American Newspaper Comics: An Encyclopedic Reference Guide? Seem to remember two different dates when searching for it. Also, do you recall the print run? You are doing a great job. There is so much important information here on your website.

Frank -- regarding the font, is it too thin?

Mark -- the test site was created based on a backup of this site on December 23, so any comments after that would not be shown. Before the site goes live we will bring everything up to date. As for the images failing to appear after you do several, what OS/browser are you on, I haven't seen that problem.

Unknown -- there was only a single edition, but there might have been two (identical) printings. I wasn't in the loop in that regard.

Thanks to all -- Allan

Comments regarding the new site viewed on an HP laptop:
-Font is a bit thin; it is certainly large enough to be legible, but it is very light, and increasing the thickness should make it darker.
-Gould enlargements worked nicely.
-Outcault enlargement cut off on right side. Enlarged image had scroll bar up and down, but not side to side, so I could not see the right edge of the enlarged image.

Regarding your excellent "American Newspaper Comics", I have a 2nd printing ("2" is the low number on the printing line on the back of the title page), which was apparently issued in 2012.

Bob -- you won't see a horizontal scroll bar, but you should be able to scroll right and left using your mouse; please try that.

Thanks for the click and scroll/drag suggestion. It worked. I can now view the entire Outcault image top to bottom and side to side.
Bob Carlin 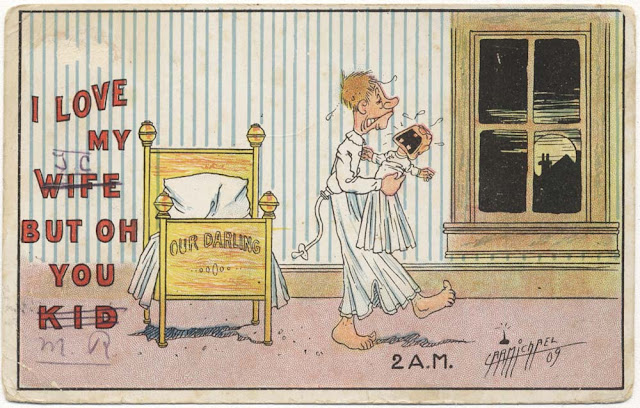 Here's another card from Taylor Pratt Series 565, probably Carmichael's bestselling series ever -- "I Love My Wife But Oh You Kid". This one offers us something different from the standard leering would-be Lothario -- here the "kid" terminology can be taken literally.