April 3 1910 -- Such is the public's insatiable interest in the upcoming Fight of the Century that Herriman posits a man letting his house burn down in order to goggle at Jeffries eating a meal.

Obscurity of the Day: Look Out for the Jinx Hal Coffman put most of his efforts at Hearst into producing editorial cartoons for the Arthur Brisbane editorials, but he was also sometimes tapped early on to contribute a strip here and there.

In the case of Look Out for the Jinx, though, it appears not to have run in the Hearst flagship papers, and so was not caught by my Hearst indexers who worked off of the New York American and Journal. For some reason I can only find this strip running in the Washington Evening Star, not part of the Hearst chain, where it appeared sporadically from June to September 1911. It was definitely syndicated by Hearst, though, as a few examples show a copyright to National News Association, one of the many Hearst sub-companies.

The strip is good fun. A little imp called The Jinx is the personification of trouble, and he causes, or at least appears as an eyewitness, to all sorts of bad outcomes. The only problem with the strip is that it is basically a rehash of Jonah, A Whale for Trouble, which Frank King penned a year before for the Chicago Tribune.

Comments:
In the same vein as "Joys And Glooms."

Obscurity of the Day: Gloria

It's quite ironic that the Associated Press decided to get into the comic strip syndicate game. They put together a fine roster of features but then were too embarrassed to admit that their serious news agency was now in the business of distributing lighthearted fun, so they practically made the whole division a corporate secret.

Julian Ollendorff's Gloria was on the original roster of features when the syndicate debuted on March 17 1930. Ollendorff's fast-paced, bubbly tale of a beautiful girl was the newspaper page equivalent of the popular movies of the day. Lots of snarky, sophisticated dialogue, jet-setting locales, attractive high society people -- it was just what the doctor ordered for a country learning what it means to be in a Great Depression.

Unfortunately, Ollendorff's Gloria was not to last very long. The strip ended after a one-year contract on March 16 1931; evidently either the syndicate was unhappy with it or Ollendorff was ready for greener pastures. The syndicate replaced it with Oh Diana* by Don Flowers, another pretty girl strip with a similar but softer tone. Flowers produced a very fine strip, but  I have to give Gloria the nod for having a little more chutzpah to it. 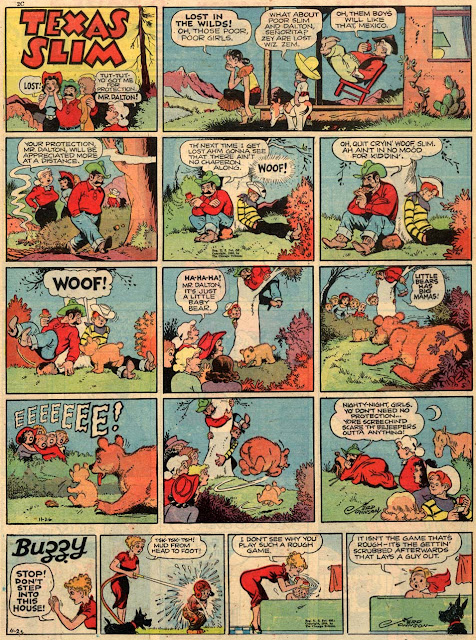 Buzzy was the topper to Ferd Johnson's Texas Slim, a strip that I think basically existed as a reward to Ferd for his service assisting on Moon Mullins. I am not a fan of  Texas Slim, in which EVRBUDDY YACKS LAK DIS TIL MAH CONSARNED HAID IS PERT' NEAR SPLODIN'. It is also a strip in which fistfights and other physical humour are often supposed to function as the point, because there certainly isn't much else there to laugh at very often.

Anyhow, if Texas Slim doesn't rate a place in my own personal hall of fame, the topper Buzzy is just so utterly lackluster that I can't even manage to form an opinion. It stars a rough and tumble sort of kid, and the gags are often about his interactions with his mom. In the sample above, emblematic of the series, you can see the level of sparkling wit that was generally on display. At least, thank goodness, they don't talk in the annoying patois of the main strip.

Buzzy debuted on October 10 1943* when Texas Slim was demoted from a half-pager to a third in the broadsheet format. Buzzy was also added to the tab and half-tab formats. Since very few papers took the strip outside of the Chicago Tribune family of papers, and Buzzy was usually thrown out by them, the strip can be hard to track. The latest I can find the topper running is September 6 1953**, but it could have and probably did run longer than that. Anyone know of later appearances? 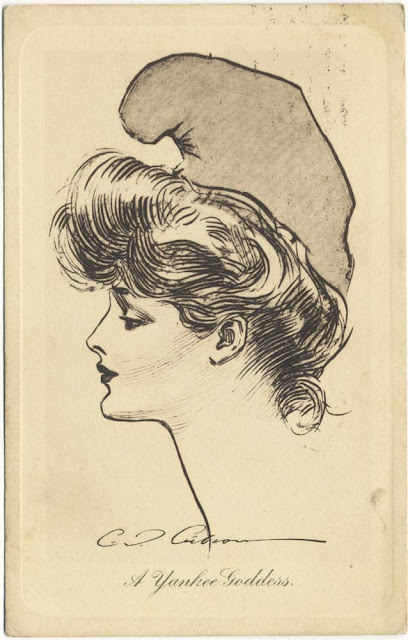 Here's a Gibson card issued by Henderson & Sons of England. This one is #91 from their Pictorial Comedy series.

I confess I am not familiar with these caps as being somehow emblematic of Yankees. But I can say for sure that Googling "historical Yankee caps" will definitely not get anyone closer to answers in this regard.

Comments:
That's a Phyrgian cap, worn by Libertas, the Roman goddess of Liberty, and used as a symbol of Liberty in art (Columbia, the female personification of America, wore one). Wikipedia has an article on the cap.

I'm guessing that it's a reference to the Suffragettes.

I think this actually an early version of a Smurfette.