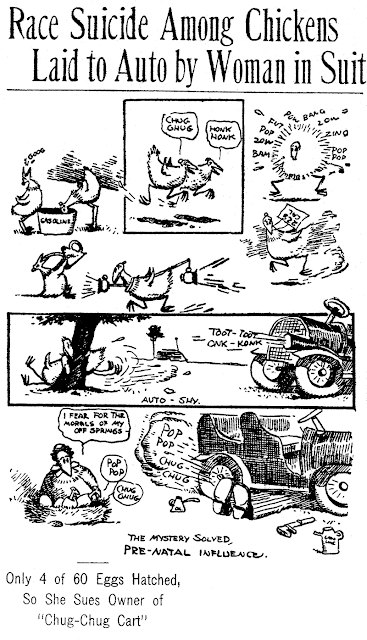 April 7 1910 -- Mrs. Molly Magarigle is suing her neighbouring duplex resident. Seems the duplex has a small barn out back, divided so each tenant has their own half. Mrs. Magarigle keeps a flock of chickens in her section while the neighbour uses his half as a garage for his automobile.

The automobile makes quite a racket causing a major fuss among the peace-loving chickens. Mrs. Magarigle claims that this disturbance of the peace is responsible for 56 out of 60 unhatched chicken eggs in her last brood, plus adds extra damages to cover setting hens now afflicted with a nervous condition, making them useless for nature's purpose.

Obscurity of the Day: Oscar

From roughly the second half of the 1950s and through the 1960s, a cartooning style came to prominence for which there is no set name that I know of. Often used in animation and in print cartooning,  especially advertising and greeting cards, it seemed to be everywhere. Dave Rusch's Oscar, above, is a great example of it. But what's it called? Beat cartooning? Cool jazz cartooning? Proto-underground? Help me out here, folks.

Anyway, the 24-year old Dave Rusch came out of basically nowhere to land a contract with United Feature Syndicate for his strip Oscar, which debuted on September 12 1960*. His bio in Editor & Publisher tells us that he was brought up in the suburbs of New York City, made quite a splash as a smart kid in school and college, was art editor of a fraternity magazine, and on graduation had recently gone to work as an art director at an ad agency. He also claimed proficiency in painting and playing jazz on various instruments.

This is, as far as I know, Rusch's only known newspaper cartooning work, and it showed good promise. The art, for its time, was strictly downbeat and in the groove, daddy-o. The writing, well, let's say that it was occasionally a bit square, man. Strictly cubesville. He obviously wanted to be edgy and modern, but on his off days he wasn't above cracking open Joe Miller's joke book for hoary old gaglines like "Don't forget your toothbrush."

The dysfunctional family comedy started off with a decent if unspectacular client list, and United Feature must have had high hopes, because they said that a Sunday version was in the offing; but as best I can tell that never happened.

After two years on Oscar, either Rusch or the syndicate decided to call it quits. I'm not sure why, because the client list seems not to have tanked all that badly. The strip ended on October 13 1962*. Interestingly, United Feature's own records say that the strip ended on  February 24 of that year, an unusual error in that resource.

What happened to Rusch after Oscar I have no clue, but I imagine the bright young man with the hip cartooning style landed on his feet.

Comments:
Not certain, but this appears to be his obituary from 2015.

Toppers: The Private Life of ... 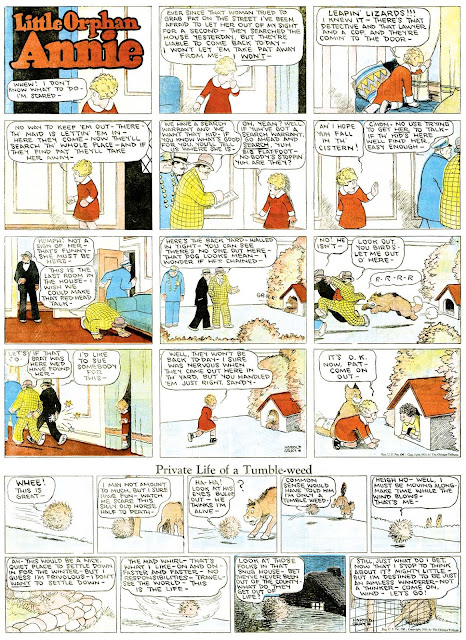 If there was a Comic Strip Hall of Fame, and that Hall of Fame had a room devoted to toppers, and I were curator, I know exactly which topper would be exhibited center stage as the greatest of all time. It would be Harold Gray's first topper to Little Orphan Annie, The Private Life of...

The strip posits the question of what objects, plants, animals (and rarely, people) think about. This was not really a new idea, but in comic strip form it would typically be played strictly for laughs. Gray, a pretty serious guy who was prone to deep thoughts, offered instead a weekly dose of philosophy, pathos and powerfully emotive soliloquies that seldom fail to make the reader sit back and contemplate. The above sample is a perfect encapsulation of the spirit of the series. Who could read this strip and not find themselves at least a little devastated by that final panel, wherein this joyous and carefree traveller has not yet realized that their travelling days may have come to a sudden and inauspicious end. If that doesn't bring your heart up to your throat for at least a moment, I submit that you might be just a little cold-hearted.

Gray could produce material on a par with this nearly every week, and did so from January 4 1931 to December 25 1932; a glorious two year run of sheer genius. When he felt that he had run the gamut, he ended the series and replaced it with the mundane and uninteresting folk wisdom of Maw Green, which would run past Gray's retirement from the strip decades later.

Comments:
Hello Allan-
This is reminiscent of the Briggs series,
"Wonder what a_____ thinks about".

Good point, Mark, and Briggs did occasionally use that series to go for pathos, not just a cheap yuck. Well, Gray loses points for originality but I still think it's the topper series I'd want if I were stranded on a desert island.

Obscurity of the Day: Second Chances

Jeff Millar and Bill Hinds, the dynamic duo that struck gold with Tank McNamara in 1974, offered a number of other features afterward, sometimes separately, sometimes together. In 1996 the pair came up with Second Chances, a strip about two middle aged divorcees who start a new relationship together. The idea is to explore how romance works between adults, both of whom have experienced the pain of relationships which did not work out, and who want very much to make fewer mistakes in this new relationship. Though Millar and Hinds aren't slavish to making every strip about remarriage, there is a distinct undercurrent always present about getting to know someone emotionally and behaviorally in middle age. Second marriages (I can speak from experience here) have a whole different feeling than first ones; Millar and Hinds do quite a nice job of exploring that in a really meaningful way while never forgetting that their primary job is to make you chuckle.

The strip is very well-written and drawn, it is insightful and the gags are good. So why didn't it succeed? I can only assume that editors looked at it as serving a niche market of those who are on their second marriages. If that was their reasoning, I have to reluctantly go along with them. I really don't think the strip would particularly appeal to kids, unmarried adults, or people on their first marriages.

Second Chances was distributed by Millar and Hinds' Tank McNamara syndicate, Universal Press, and I wouldn't be surprised if they did so more out of duty than any real hope that the strip would hit the bigtime. The strip limped along for four years, but never commanded a large client list. It debuted on July 22 1996* and ended on September 10 2000**. When the strip ended, Millar and Hinds promised that Nick and Kate, the main characters, would start to be seen occasionally in Tank McNamara. I don't know if that ever happened.

No reprint books were offered during the strip's life (or after), which is too bad. I think the fans would have surprised Universal Press with the level of their support and interest in the feature.

I stumbled onto "Second Chances" late in its run and enjoyed it. To my eyes it played as just a couple of a certain age -- rather like Arlo and Janis.

Yes, they're regularly featured in Tank McNamara to this day. They're Tank's next door neighbors and best friends, sometimes carrying a day's strip without Tank. Of course the banter now gravitates to sports, usually with one or both watching an event on TV. They also figure in the ongoing plot of Tank's courtship and upcoming marriage to a tennis pro, confidantes / straight men to the engaged couple.

The new setup involved both strips: In Tank McNamara, Tank's beloved brownstone was condemned and he had to move, eventually choosing a house in the suburbs. In Second Chances, the Chances noticed the house next door had been sold and their new neighbor was very large. Tank knocked at their door to introduce himself, and that was the end of Second Chances except for the creators' farewell the next day.

Semi-related: The Brick Bradford Sunday page briefly included a topper, The Time Top. Some time later the Time Top and its inventor returned as part of the Brick Bradford strip. Thinking there are other cases of toppers being absorbed.

DBenson, thanks for the info. To be honest, I hadn't realized that Tank had gotten so plot-driven as that. I never really read the strip, not having any great interest in sports (other than baseball, which I also gave up on in the last decade or so).

Also not coming onto my radar .. that the couple were named the Chances, very cute. --Allan

It's still primarily sports satire, clicking over to Tank's private life now and again as sort of a breather.

When I discovered the two major syndicate sites a few years back, I reconnected with several strips that had dropped from my local papers. Tank vanished from the Mercury News during an oddly soapy arc: A pro basketball player is sentenced to community service in a hospital and befriends a little boy with AIDS, back when the disease was a controversial topic.

In more recent years, a Sunday page had somebody (maybe Nick) asking Tank if he has any life regrets. In flashback we seen teenaged Tank attend a ballet, fascinated. Alone, he tries raising one leg up high. Then we see his father, exploding as he yells "You want to give up football for WHAT???" Then back to Tank in the present, brushing off the question with a casual "Nah".

Brings to mind a series of children's books by comic strip creators, all of them with some kind of message. Tank McNamara figured in two of them, one questioning the macho-ness of hunting and the other on parental pressure on kids playing baseball. Other volumes featured Miss Peach, Gasoline Alley, Doonesbury, and I think Steve Canyon. I was long out of the target audience but now regret not collecting them.

Tank was also dropped by the San Francisco Examiner during that AIDS-related storyline. I don't think they ran any of it, just a white box where the strip would have been, and a message saying something like 'Today's strip deals with AIDS. The Examiner found the story to be inappropriate.' 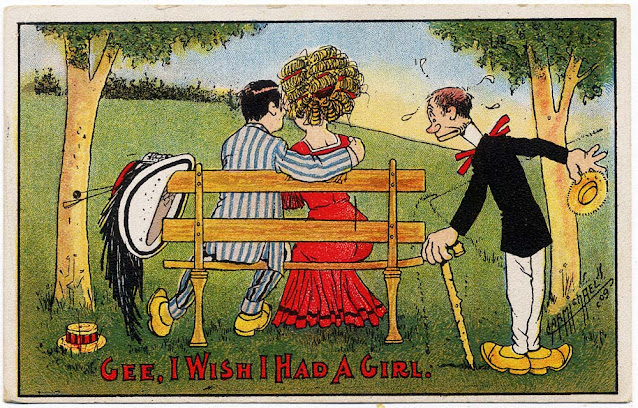 Here's another card from Carmichael's "Gee, I Wish I Had a Girl" series, less colorfully known as Taylor Pratt series 568. It was issued in 1909.

I often wonder why someone would send a postcard with this sentiment. Sure, you could send it to someone you secretly admire, but that's a brave act that couldn't account for the untold thousands of these cards they sold. In this case, though, I think I may have an actual secret admirer or even a stalker card -- the unsigned message, in childish block letters, is "ITS TOO BAD ISNT IT". Gulp.