May 11 1910 -- Another Fight of the Century strip from Herriman, once again stating the obvious that the black community is excited about Jack Johnson, and couching it in a racial stereotype.

Comments:
Thanks again for posting this. It was a treat.

Comments:
I am really enjoying this crazy, breakneck-paced adaptation of "Hans Brinker" -- it's a nicely illustrated Yuletide treat. Thank you.

Wow, Blogger sure gave me a lump of coal oin the stocking this year. Fixed...

I don't like Joe Kubert's art, his nonstop promotion for his "School" is why his credit reads this way. he couldn't resist the micro-advert.
Ever notice how so many people he draws, as seen in this series, that people often have eyes like the kids in "Village Of The Damned?"

Comments:
Wow. The fastest surgical procedure in the history of comic strips!

Sorry. Haye to tell you last strip is only available in small size again.

Comments:
Great series.
But, you can't open the final strip today to make it easier to enjoy.

Oops, sorry. The uploader was giving me fits with these for some reason. Fixed now.

Hans Brinker, or The Silver Skates, Part I

Yes, it's time once more for the annual Stripper's Guide Christmas strip. If you've been following this series for the past decade or so you may have noticed that while I can often dig up a Christmas strip with good art, the stories can be, well, to be charitable let's just say they're not quite Christmas miracles.

That formula -- great art, pungently aromatic story -- is alive and well in our 2022 Christmas strip, Hans Brinker, or The Silver Skates. It was originally NEA's 1984 Christmas story, one of four produced by the Joe Kubert art school from 1982-85. You've got the transcendent art of Joe Kubert, who may claim his students at the Joe Kubert School did this, but you're not fooling anyone Joe. Kubert's sense of the dramatic shot, the panel bursting with energy, makes me wish that he spent more time doing newspaper work instead of all that funnybook stuff. Well, not really -- his style and sensibility are tailor made for the comic book form. If he'd had full pages to work with back in the golden age of newspaper comics, that would be one thing, but to hobble Kubert's brush with a teeny-tiny 4-column daily? That's just crazy talk, Jerry.

The sloppy storytelling is really a matter of choosing the wrong source material for a very short 20-strip run. Though Hans Brinker isn't exactly War and Peace by any means, there's enough going on that to try to tell the story in that short space is practically impossible. Kubert should have pared the story down to the absolute bare bones, but he inadvisedly tried to hit on some subplots and ended up with a mess. If you already know the story the strip works because you can fill in all the details; if you don't, the story seems disjointed and just plain ridiculous.

Comments:
Thanks for posting this! No -- I don't think Joe fooled anyone. I look forward to reading the rest of it.

The Disney film version -- made for the Sunday night hour, but released theatrically abroad -- is actually pretty good. Shot on location, modest in scale, and quietly moving when it needs to be. It's Disney, but not excessively so.

Disney's own Christmas strips have been published as a book. Artwork is slick and on model, of course. But stories are likewise a bit lame, usually about characters from animated features.

Some years ago I recall stumbling across an NEA holiday strip that introduced "Pibgorn", then a simple G-rated fantasy. Did the holiday strip launch any other ongoing features?

The only one that comes to mind is Sandy Sleighfoot's Adventures, which spawned an ongoing series. But it was distributed by a tiny syndicate to few papers, so few ever saw it. I mean to cover it every year about this time on the blog, and still haven't done so. Next year for sure! --Allan 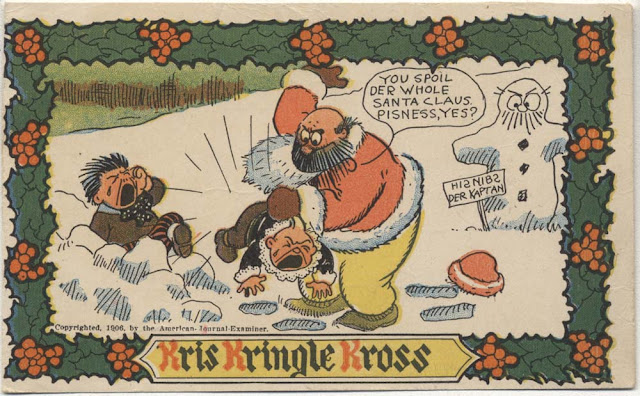 A Christmas themed postcard given away by the Hearst papers in 1906; this particular one came out of the Boston Sunday American.