Chauncey McKee “Chad” Grothkopf was born on June 14, 1914, in Ironton, Ohio, according to his World War II draft card. He was adopted by Oscar Frank Grothkopf, a traveling salesman, and Fay McKee Zurlage, who married on August 22, 1920 in Chicago, Illinois. At some point the couple moved to Ohio and adopted him. The Ohio Birth Index at Ancestry.com has a “Chance[y] Burlage” who was born on the same date. Some sources have Charles as Grothkopf’s first name but there are no official documents with that name.

In 1926 the Columbus Dispatch mentioned Grothkopf twice in its Junior Legion children’s page, for those between the ages ten and fifteen. In the November 4, 1926 edition Grothkopf was among many winners in the contest to draw the face of Bringing Up Father Jiggs. Grothkopf had a strip and an illustration published in 1927. On July 24, 1927, the Dispatch said Grothkopf was one of fifteen boys and girls who qualified for art classes at the Columbus Gallery of Fine Arts. They


received instruction in the art of cartooning and pen and ink drawing suitable for newspaper reproduction. The first experiment continued for 16 weeks.

H.E. Cochenour, member of the teaching staff of the art school and himself an artist, took these young Dispatch children’s page artists under his wing and outlined a course so planned as to be of practical help to these of varying experience.

He gave them the fundamental rules of drawing perspective design, figure drawing, lettering and arrangement. …

Grothkopf was a student at North High School in Columbus. Below is the Marrigale Art Club picture from the Polaris Annual 1929; an arrow points at Grothkopf. 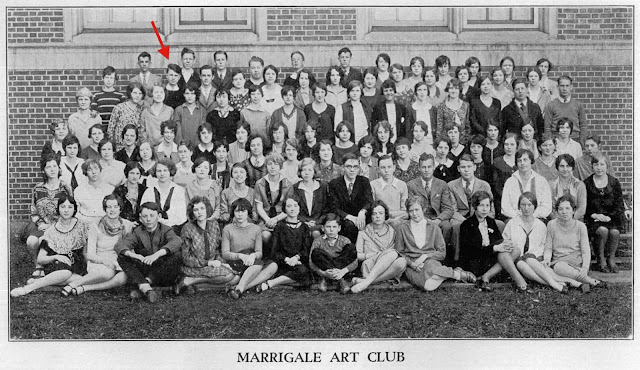 The 1930 U.S. Federal Census listed Grothkopf as an adopted son. He and his parents were Columbus residents at 1758 North High Street. His father was a traveling salesman in the oil and advertising industry.

Grothkopf talked about his childhood, art training and early career in an interview published in the Fawcett Companion: The Best of FCA (2001).


I was born in a small Ohio farm town. I had a very Huckleberry Finn-like upbringing. We’d all go swimming on hot summer days in the Ohio river. … I started drawing at a very early age. … I loved fait tales and cartooning and would draw everything as if it were alive … If you were an artist in my hometown you were considered a sign painter; I was surrounded by farmers and art just wasn’t something that was thought of as a legitimate career. …

I won a scholarship [in the early 1930s] at the Chicago Art Institute where I took a fine arts course … After graduating, Paramount Pictures selected me to be one of their junior art directors. At Paramount, I did no cartooning, just straight illustration like the type I did when was at DC. Lousy stuff … My heart belonged to cartooning. … I started out at Detective Comics (DC Comics) in 1938 …


American Newspaper Comics (2012) said Grothkopf’s earliest comic strip effort may have been Toytown Christmas which was for the Ledger Syndicate in 1938.


The earliest mention of made-for-television animation in America is Willie the Worm, an eight-minute cartoon that aired on NBC in 1938. Animated by Chad Grothkopf using cels and cutouts, it was seen in the New York area by a handful of people who owned sets with seven-by-ten-inch screens.

Grothkopf produced material for Stan Lee at Timely Comics. He found success at Fawcett Publications with Funny Animals which featured Hoppy the Marvel Bunny, Willie the Worm, Sherlock Monk and Chuck, Benny Beaver and many more.

Famous Fiction began on January 11, 1942 with Cut-Out as its topper. Grothkopf drew it from March 29, 1942 to December 20, 1942. Other artists worked on the strip while Grothkopf continued writing it. The Bell Syndicate series ended on May 19, 1946. Also in 1942 Grothkopf drew True Comics which began with Sam Glankoff.

Grothkopf enlisted in the army on February 12, 1943. After the war he continued work in animation for television.

The Evening Star (Washington, DC), October 24, 1943, said Grothkopf was one of five soldiers who exhibited at the Alexandria Library show, sponsored by the Artists’ Professional League, during American Art Week in November. The soldiers were doing technical work at Fort Belvoir. The Star said Gorthkopf was a Chicago Art Institute student who draws the syndicated strip Moments of History.

Grothkopf was profiled in Editor & Publisher, July 8, 1950. He talked about the PM beer advertising campaign. Grothkopf hired Al Stahl to do an animated film of the product.

The radio and television success of Howdy Doody spawned a comic strip drawn by Grothkopf and written by him, Milt Neil, Stan Lee and Edward Kean. The United Features Syndicate strip ran from October 15, 1950 to June 21, 1953.


A certificate of incorporation for “Chad Incorporated” was filed recently in the town clerk’s office. The new firm will engage in the television business, including writing, directing, producing, recording and filming of TV shows. Its incorporators are Mr. and Mrs. Chad McKee Grothkopf of Wilton and Agnes Vaughan of New York City.

In 1960 Grothkopf appeared in the Famous Artists Schools advertisements which said “Chad Grothkopf, TV art pioneer, spelled out everything anyone needs to know for successful television drawing.”

Grothkopf passed away on January 25, 2002, in Norwalk, Connecticut. A partial obituary appeared at Westport-News.com, February 4.