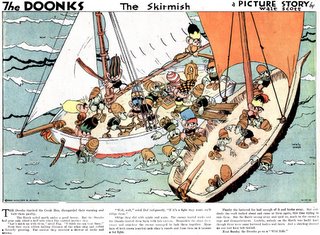 This is my sole example of a panel feature titled, obviously, The Doonks. It's by Walt Scott and from 1933. Unfortunately the tearsheet I have doesn't 'fess up with the name of the newspaper, and the copyright is to Scott himself, so I'm at a reseach dead-end.

Does anyone recognize this series? I'm guessing Scott was doing it either for a particular paper or was trying to self-syndicate it. If someone can identify a paper it ran in, I can probably take things from there with a microfilm request.

Walt Scott was a workhorse in the NEA bullpen starting around the mid-30s. His best remembered feature is The Little People. He also did many of NEAs closed-end Christmas strips.

Hi Fram --
Since I wrote this post (three years ago) I checked the microfilm of the Cleveland Plain Dealer at the Library of Congress. There I got dates 2/19/33 - 1/5/36. Do you have samples from 1931? Did I miss two whole years of the run?

Well, I probably misinterpreted a comment I read. According to http://www.kokoonartsclubofcleveland.org/club-members/scott-walt, he was known for his Doonks in 1931, and I thought that had to be from the newspaper. So the figures existed earlier than 1933, but I have no other indication that they were published in any newspaper before your date... I'm a Belgian, I have no American newspaper clippings at all, but like many of your comic strips. I'm Fram at Wikipedia, I wrote e.g. the articles there on Winnie Winkle, Polly and her Pals, HH Knerr, McNaught Syndicate, ... but mostly based on what I could find through internet sources (Google books and so on).

Hi Fram --
Considering the lack of depth in that bio, I'm going to stick with my date for now. I'll make a research note, though, to check the 1931 Plain Dealer next time I have access to see if I missed something. Thanks for the info!