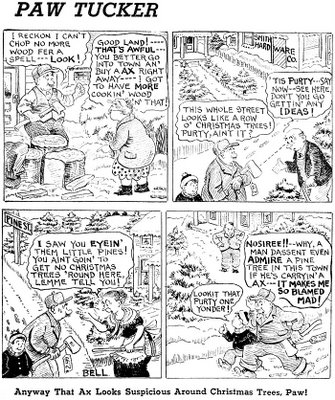 There is a fertile history of farm publications in this country. Most of these newspapers and magazines had their own homegrown comic strips, often written and drawn by relatively accomplished, though today unknown, creators.

In the case of Paw Tucker, though, we do have a smidgen of information. The signature Bell refers to Ray C. Bell and his wife Caroline. Ray did the pencilling on his work, his better half did the inking and elaborated on Ray's sketchy backgrounds. This information courtesy of their son's book A Bedtime Companion - An Anthology of Humorous Americana (ISBN 0-9710519-5-X). According to son Robert, the dynamic duo drew cartoons for farm publications from the early 1930s through the early 1950s*.

Their production in the 30s was mostly panel cartoons, panoramic views of family get-togethers being a favorite subject (much like Dudley Fisher's Right Around Home Sundays). A central figure in many of these panels was Pa Tucker, and finally the Bells made him the star of his own comic strip, while also continuing the large panel format series. Pa's adventures lasted until the early 50's (my latest samples are from 1951)*, the panel cartoons were dropped around 1949.

Apparently the Bells managed to syndicate their wares to several different farm publications. They definitely appeared in Ohio publications (their home base), and all my samples are from the Wisconsin Agriculturist-Farmer.

Farm publication comics are a rich vein of American cartooning history, and well worth someone doing serious research. My hands are full with researching comics in mainstream publications and these features don't fall under the purview of Stripper's Guide (they fail to meet the requirements on two fronts; they didn't appear in "general interest newspapers", and most farm publications were bi-weekly, whereas Stripper's Guide rules say that comic strips have to appear in weekly or more frequent publications to qualify).

* since this post was written, I've found that the strip was running in the Wisconsin Agriculturist at least until 1963.

Comments:
My wife and I have just recently come across some full panels of Paw Tucker cartoons. They were in a large envelope adressed to her Grandfatherpost marked in 1963.
There are six large sheets of cardstock-like paper 9 3/4 by 22 inchs.
Each has Ray C. Bell Centerburg, Ohio at the bottom of the pages.
We were wondering if anone would be interested in them or not?
I will check this web site later to see if anyone responds.
Thank You,
B.Sands

My grandfather lived on a neighboring farm to the Bell's; we drove by their place often. I never met them, but my father knew them well.
Their "Paw Tucker" strip appeared in the "Ohio Farmer" magazine, which Dad subscribed to.
Dad told about visiting Mr. Bell at a hospital, must have been in the early 1950's. Ray Bell is said to have stated, "I'll tell you one thing. A hospital is no fit place for a gentleman!"
I always looked forward to the strip in the magazine. It just happened to come to mind as I was thinking about some other old strips that I enjoyed, took a chance,and did a search. Good to see the Tuckers again!

My Grandfather was Ray Bell. After he passed, Caroline, my Grandmother took over. We have some of the cartoons hanging up in our house and also Caroline's oil paintings. My e-mail is gmiscko@hotmail.com