Here's a really neat batch of material from late 1939. Victor Fox, grand poobah of the Fox Features comic book company, decided that his comic book material would be an excellent addition to the nation's Sunday newspapers. He staged an extensive marketing campaign in Editor & Publisher, which I have gathered together here, and am presenting in chronological order.

Now as far as I know, all the Fox Features newspaper offerings actually started running in January 1940, but the marketing tries hard to give the impression that it was already in newspapers in 1939. However, a close reading of his impressive circulation claims reveals that he is talking about his comic book sales, not newspaper syndication. If anyone has evidence that any Fox material was running in newspapers prior to January 1940, I'm anxious to hear from you.

By the way, take the list of titles with a healthy dose of salt. The only titles that ended up appearing in newspaper syndication, as far as I have been able to document, are Blue Beetle, Doctor Fung, The Flame, The Green Mask, Patty O'Day, Rex Dexter of Mars, Secret Agent D-13, Spark Stevens of the Navy and Yarko the Great. All were Sunday only features, with the exception of Blue Beetle which also had a daily. 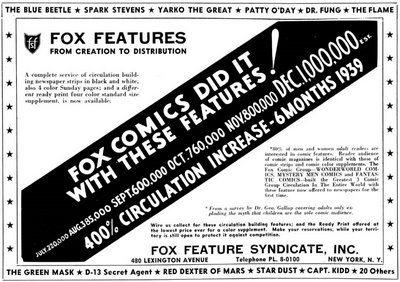 Fox Sees Adventure Comics in Ascendancy
By Stephen J. Monchak, 10/28/39
Comic strips change in style as do many other American newspaper circulation building features and to­day the trend is toward the adventure type of comic because of its wide ap­peal to newspaper readers from six to 60.
That's the firm opinion of Vincent S. Fox, president-editor, Fox Feature Syndicate, New York, who has some strong evidence in the form of circula­tion figures to prove his contention. This column saw some of them this week.

Entered Field Six Months Ago
Without fanfare or any great pub­licity, Mr. Fox, a newcomer to the syndicate field (he started six months ago), organized a group of adventure comic monthly magazines (Wonder-world, Mystery Men, Fantastic), sensed (it appears) what the public wanted, and bringing to play his knowledge of retail and merchandising methods ac­quired in years of bank underwriting on Wall Street, built the group's net circulation where it today stands over a million monthly.

This is a neat 400% increase, using as the base the 190,000 figure chalked up by the first issue (May, 1939) of Wonderworld. Mr. Fox created Mys­tery Men in August and the first issue of Fantastic now is on the stands although it is the December issue. Mr. Fox explained that comic monthlies work two months ahead.

Now, believing that his circulation figures are proof of their popularity, Mr. Fox now is offering the more popular of his features to newspapers.

Strips, Supplements Available
He told the column FFS has pre­pared for release Dec. 3 a four-page, eight-comic ready-print Sunday sup­plement in four colors. The comics include: "The Green Mask," "Patty O'Day," "Dr. Fung," "Yarko the Great," "Rex Dexters of Mars," "The Golden Knight," "Tex Maxon," and "Spark Stevens," all features being polled by FFS for reader popularity. These can be serviced in black-and-white, he added. In addition, Mr. Fox said, FFS will release this month to newspapers four daily comic strips, "The Green Mask," "Spark Stevens," "The Blue Beetle," and "D-13 Secret Agent." These are black-and-white. Of FFS's 70 comic features, the column was told, more than 50 are available to newspapers.

The FFS chief, who entered the publishing business in 1936 with a monthly, World Astrology, worked in Wall Street for 20 years. Born in Not­tingham, England, he came to this country as a child and has always lived in New York. He attended Brown University for one year.

A human dynamo, he supervises all steps in creation, production, market­ing, and distribution of the FFS con­trolled features. He has a unique ability to create strips and sequences. Directly responsible to him are a staff of editors and 40 artists. From child­hood, he always wanted to be a pub­lisher. It appears that he has arrive
d. 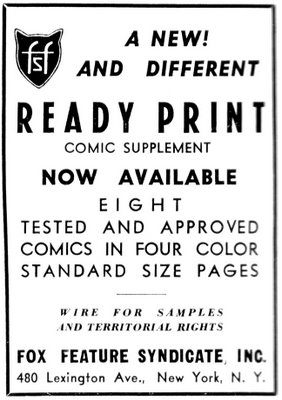 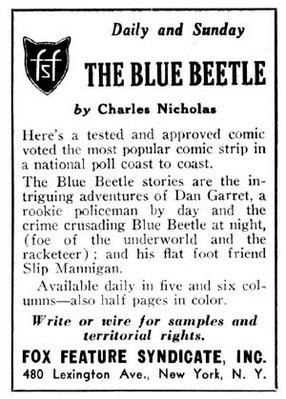 Offers Feature to Papers
11/11/39
Fox Feature Syndicate last week announced that "The Blue Beetle" is now available for immediate release in five and six column strips together with a Sunday half-page in four-color and black-and-white. The feature is six months old and is one of FFS's tested strips. It is now being made available for the first time to newspapers.

Servicing New Feature
11/18/39
Fox Feature Syndicate this week announced they are now distributing on exclusive franchises and territorial rights, the new feature in half-pages for Sunday only of "Samson," by Alex Boon. The daily feature, now being produced, will be ready in January 1940., in five and six column strips, it was said by FFS.

Adding "Blue Beetle"
11/25/39
The Fox Feature Syndicate has announced that due to requests from various newspapers throughout the United States, it has agreed to include the Blue Beetle Feature in its comic supplement, Comic Pages Weekly. 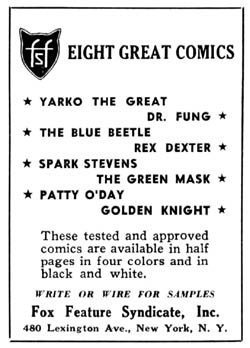 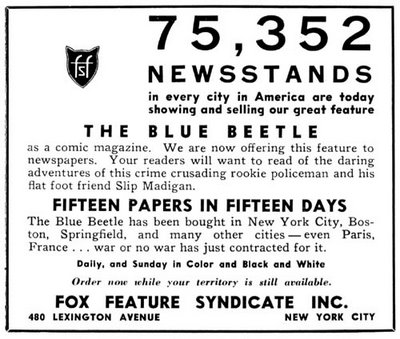