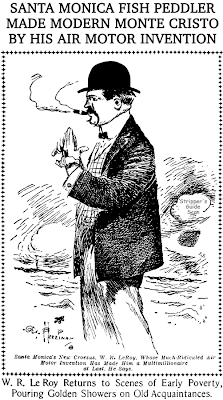 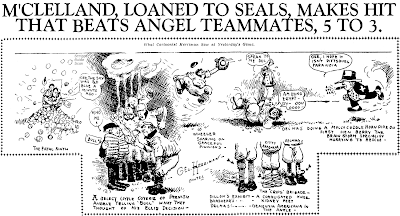 This time on Herriman Saturday just two images, cuz next week we'll be starting in on Herriman's second comic strip series for the Examiner. The series will be about Mayor Harper and I need a little time to see if I can decode at least a few of the many in-jokes about LA politics. I read the strips yesterday and I was completely lost. If anyone happens to know of a good information resource about Mayor Harper's tumultuous time in office I'd really love to hear from you.

Back to current business though ... today's cartoons were printed in the April 15 and 17 editions of the Examiner. The caricature of W.R. LeRoy accompanies an article about this fellow who invented some sort of "air motor" and struck it rich. The article fails to make clear just what exactly Mr. LeRoy invented but I find no references to the inventor on the web. Someone with deep pockets must have been impressed by his invention, though, because the formerly poor fellow returned to his old haunts throwing money around like water.

On the 7th we get a recap of the Angels-Seals game. Inexplicably Herriman makes no cartoon comment on the ironic twist related in the headline.

Comments:
Boy, I just spent one of the most fun hours I've ever had on the net, reading the wonderful strips you've posted here! I'll have to reread them along with your commentary next time! Thanks so much for putting these up!