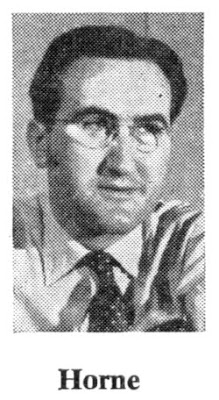 The idea for Max Horne's new household hints comic strip, "The Handy Homers," distributed by Editors Syndicate, grew out of an advertising campaign. From 1949 to 1951 Mr. Horne created a series of ads for the American Home Magazine to run under the title "Some People Can't Think of Anything But Home." The ads embodied do-it-yourself suggestions for household gadgets, and when the campaign ended Mr. Home decided to launch a newspaper feature. Mrs. Horne, who acts as the artist's agent, landed the syndicate con­tract.

Now in its third month, the fea­ture is drawing comparatively heavy reader response. An offer of $2 for usable ideas brings many suggestions, some illus­trated, most usable. But Mr. Horne admits he'd really rather use his own ideas, of which there is an apparently inexhaustible supply.

Mr. Horne began his art career in his native Germany. In 1933, when he was 17 years old, the Berlin magazine Gebrauchsgraphik, a publication dealing with international advertising art, commented on the "remarkable precision and perfection of his execution, down to the minutest detail."

His U. S. work has included creation of the Chiqita Banana advertising campaign, childrens' books, travel folders, and a recent series of Schaefer Beer ads for newspapers.