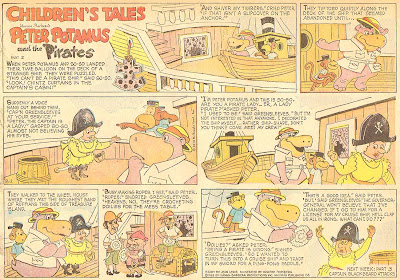 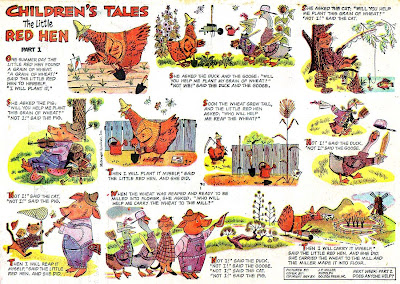 In response to a request made yesterday, here's a few more Children's Tales strips. As you can see the book publishers (and McNaught worked with quite a few on this series) get credited on the strips. It didn't occur to me while I was putting together my index on this series that anyone would be particularly interested in the publisher credits so I didn't make note of them. However, since the titles and creators are given I imagine it would be easy for a children's book fan to determine who published what in book form.

My question about the book adaptations is whether the strips are condensations of the books or complete reprintings. I always assumed the former to be the case but maybe I'm wrong.

EDIT:
Alberto Becattini informs me that most, perhaps all of the Children's Tales book adaptations were redrawn by Frank Bolle. Becattini explains that because the original artwork to these children's books was painted, that line-drawn equivalents were needed for the newspaper feature. He believes that Bolle used a lightboard extensively in order to faithfully translate the styles of all these various artists. Bolle did occasionally hide his signature in these pages, and he was pretty darn sneaky about it. Even with Alberto's directions to finding a few of them I could barely make them out. If you'd like to play hide-and-seek for Bolle signatures, here's some from Becattini to give you a head start:

Thanks for that important inside story to this feature, Alberto!