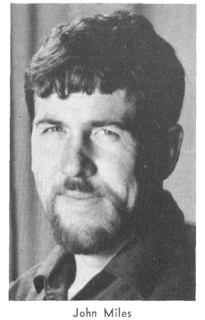 The Register and Tribune Syndicate is offering a comic strip that is an innovation inasmuch as the cartoon character— “Perkins” — says absolutely nothing but is always getting himself into humorous difficulties within his frame of reference.

The cartoonist, John Miles, makes every line in the strip work—the horizons, the borders, the window frames—wherever there is a line, it is likely to become part of the joke.

Although Miles describes his strip as “functionally graphic,” comic buffs will recognize it as pantomime. Because pantomime is so rare in America the syndicate’s editors had to cross the Atlantic to find “Perkins”. Miles is a bearded Englishman who resembles a Victorian buccaneer. “Perkins,” his brainchild, came into existence in the London Sunday Times as a once-a-week strip (the first and only comic strip to ever appear in that paper), but Miles quickly demonstrated that he was full of too many good ideas to wait a whole week to present another.

“Therefore,” says the syndicate, “he has agreed to do six- a-week and share them with the whole world.” So far the “whole world” consists of 41 newspapers.

The 34-year-old cartoonist, described as “a keen observer of situations from which he derives a great deal of his inspiration,” is rumored to be a quiet person (it is hoped, however, he is more talkative than his brainchild “Perkins”), who “doesn’t conform to routine and works during the night if so inclined.” A voracious artist, he’s done portraits, poster, silk screen, advertising layouts, brochures and other commissions. In 1964 he was rated as one of the top designers for his designs of children’s toys.

Miles, an art school dropout, now lives “in one of the best known stately mansions in England.” He didn’t always. During his tour of duty with the British Army he lived and served in Germany, drawing maps and geographical designs. Later he, his wife of 13 years, Margaret, and their daughter moved to Bermuda where he worked on the island Press. Tiring of palm trees and incessant sunshine they moved to Greece.

It is hoped that he’ll be remembered in America for his “Perkins” strip. “I am very enthusiastic about this strip,” says Denny Allen, the syndicate’s managing editor, “because it simply brings fun and laughs to the comic page ... which is just what that page is for. This is something which is not imitative of another comic strip. It’s fresh, creative and offers a brand of humor to readers which they deserve. And, best of all, it was not conjured up to capitalize on some particular fad or mood. It is just one man’s attempt to - provoke laughter by clever drawings.”

Comments:
he was like mr. bean, posted on our sunday comics page, 70s in manila..

if there is a simple way to say it in shapes or lines, "perkins" !