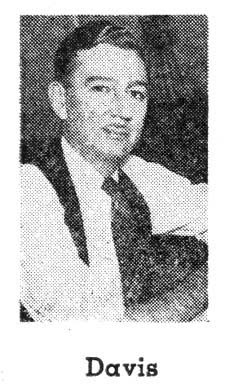 This statement is trite, with varying degrees of accuracy, but it is doubly true in the case of "Mandrake the Magician," drawn for King Features Syndicate by Phil Davis.

Not only can Davis put on silk topper and cloak and pass for Mandrake, but Mrs. Davis can slip into one of the fashionable frocks of Narda, the heroine, and Mandrake fans would see the resemblance.

Mrs. Davis, as a matter of fact, often draws Narda. An artist in her own right, and a fashion illustrator for a St. Louis department store until early in War II, Martha Davis got in the habit of drawing Narda—and sometimes the entire strip — when her husband was working with the Curtiss-Wright Corp., illustrating Air Force manuals.

"Without her help," says Davis, "Mandrake probably would have folded."

Mrs. Davis enjoyed her work on the strip so much she stayed on after the War. Now the couple produce it as a joint effort, but Phil usually does Mandrake and Martha usually does Narda. They work in a studio in downtown St. Louis, move out into the Ozarks in the Summer.

The strip was hatched when Lee Falk, a St. Louis advertising agency executive, asked Davis to draw a dozen panels on a speculative basis. Davis agreed and in 1934 Falk took the idea to New York and sold it. Falk has continued to supply the continuity. Artist and continuity writer are no longer geographically close. Falk, now a New Yorker, spends his summers in Massachusetts, where he is co-owner of Cambridge Summer Theater.

Mandrake is another strip with double-appeal—to the men for adventure action, and to the women because of the accurate modishness of Narda's wardrobe.

"When I get the desire to exercise," he says, "I just lie down for awhile until it passes."

Comments:
This article prompts a question from someone who doesn't know much (i.e. me) for someone who really knows (i.e. you) about the art on the Mandrake strip. Davis' dry-brush style artwork on the 1930s strips, especially the Sundays, looks entirely different from the art in most of the run of the strip. The art from the 40s and 50s has a strong style too, but its aggressive lack of drama contrasts so greatly with the earlier work that I wonder: did Davis simply change his style radically, or was the strip ghosted (by Mrs. Davis, maybe?), or what?

Hi Smurf --
Your confidence in my inside knowledge is touching. Misguided but touching. As far as I know Martha was Phil's only assistant, but I certainly haven't made a study of the subject.

I've read very little of Mandrake, but I would love to read more ... perhaps Dean Mullaney will take it into his head to do one of his classy reprints. The very stiff art of the 40s and 50s is oddly appealing to me. But then I love Jay Disbrow's art, too, which most people poo-poo as similarly stiff.

It's not in good-ol'-fashioned print, but there's a wonderful resource for "Mandrake" material at http://mandrake-comics.blogspot.com/

One can find 4 different styles for Mandrake by Phil Davis.
In the early strips one find the art quite tense. Then the art soften a bit. After 1938 one find that the figures becomes more slender. From early 40s the panels look more and more ‘frozen’ in time.
The first daily strip was in the papers June 11. 1934, then the first Sunday page from Feb 03. 1935. Reading interviews of Phil Davis he said he did the layout, pencil, ink and letter work in the early years (1934-1938).
During spring 1935 we can see a dramatic change in the art style. PD never told anything about assistants in the early years but it is known that Ray Moore (The Phantom from Feb 17. 1936) started helping PD with some of the ink work. Perhaps about this time ?
For the dailies the last strip signed by PD were Jan 11. 1936. According to Lee Falk (Ciff-Wiff # 12 – 1964) he believe that PD stop signing the strips because ‘he would therefore no longer considered him self as solely responsible for the drawing’.
In 1939 PD said that he had a pen and ink draftsman whom he sublets part of his pen work and another part time worker (Eddie Walcher ?) who did his lettering.
So when did Martha Davis start as assistant on Mandrake ? It is said that she came in when PD did some work for Curtiss-Wright Aircraft Company from 1942 and on. But during 1941 we find several Sunday pages without the signatur of Phil Davis. And the last page I have found with his signature are the one from June 01. 1941. Looking at the dailies from the June 1941 we can find the ‘new MD look’ for Narda. Looking through strips and Sunday pages from 1942-1946 one can find several looking ‘ghosted’ by Martha Davis.
Sorry, a bit bad english, but....
Friendly Peder