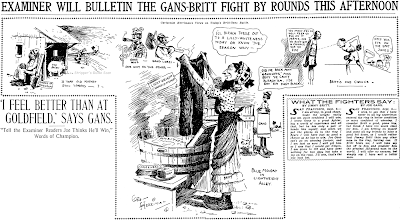 Monday, September 9 1907 -- Today's the day of the big fight between Joe Gans and Jimmy Britt. The general consensus is that Gans will prevail, and the betting odds are in his favor. The Examiner set up a large board in front of their offices on which to provide blow-by-blow updates from San Francisco, and the street was mobbed by thousands of excited boxing fans.

Tuesday, September 10 1907 -- The fight is now history, and as most expected, Gans won handily. According to the news articles, it was well known that Britt's arsenal was limited to an effective left to the body, an attack that Gans, a master of defense, was able to counter handily. Reports indicate that Gans could have easily put an end to the fight as early as round two, but he instead gave the fans something for their money by stretching out the contest to five rounds. In that round Britt tried to make a punch to the body that was deflected with a chop by Gans. This move caused a bone to break in Britt's wrist and his sidemen didn't allow him to enter the ring for the sixth round.

Amazingly, the level of editorial racism seems muted regarding any supposedly unsportsmanlike conduct from Gans. Charges that Gans 'doesn't know his place' and was treating the white boxer without due respect are barely mentioned, even by the normally intolerant C.E. Van Loan, the Examiner's head sports writer. I think this can be attributed to Gans actually managing to win over the boxing fans and sports writers before the fight. Gans was always willing to talk, always well-spoken in his comments, and courtly, courteous and gracious to a fault. Was Gans the Jackie Robinson of the boxing world?

Comments:
Grateful as always. I love looking at these.