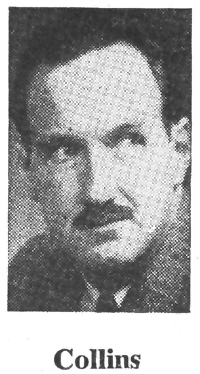 Kevin The Bold, valiant fighter, skilled swordsman, champion of the oppressed, is the dashing hero of a new Sunday color comic feature of that name which NEA Service will introduce Oct. 1.
The artist is Kreigh Collins, creator of the current NEA Sunday comic, Mitzi McCoy. With the introduction of Kevin The Bold, whose adventures are laid in 15th Century Ireland, Mr. Collins returns to the field in which he made an international reputation — the field of costume illustration.

The story of how Mr. Collins went back nearly five centuries for his new hero is perhaps without precedent in the comic business, says Ernest Lynn, NBA feature director. It was the outgrowth of popular approval of two episodes in Mitzi McCoy, each of which gave the artist an opportunity to display his great flair for period art. The first was a story dealing with the history of the Irish wolfhound. The second subtitled "The Christmas Story," told the story of the birth of Christ. This was released at the Christmas season last year.

At Editors' Request
In each instance Mr. Collins used the device of having Stub Goodman, one of the leading characters of Mitzi McCoy, narrate the story to a young boy, Dick Dixon. And in each instance fan mail greatly increased. Several editors urged period illustration on a regular basis.
So with the release of Sept. 24, Mitzi McCoy enters a new phase. This release forms a bridge into the new story, taking the readers from the 20th century town of Freedom, U. S. A., to the sea-coast of 15th Century Ireland. This time Stub Goodman narrates to his young friend the story of "The McCoy Legend," dealing with the ancestors of Mitzi McCoy, among them the beauteous Moya McCoy. Thereafter Mitzi McCoy merges its identity with Kevin The Bold and on Oct 15 the feature formally assumes the name of its new here.

Mr. Collins' new protagonist enters the story masquerading as a shepherd. His exploits in routing Barbary pirates who have made a slave raid on the Irish coast earn him the title of "The Bold." In subsequent adventures the action moves to other parts of the world, with Kevin accompanied by a great Irish wolfhound, Rory, ancestor of Tiny, a prominent character in Mitzi McCoy.

Mr. Collins, who was born in Davenport, la., in 1908, received his art education in Cincinnati and Paris. He began his career at 19 and since then has succeeded at almost every type of illustration— murals, landscapes, portraits, and book, magazine and advertising art. He lives in Ada, Mich.

Comments:
Thanks for this post on Kreigh Collins. The only piece of his work that I'd ever seen of his is a "Kevin the Bold" strip reprinted in the old Menomenee Falls Gazette.