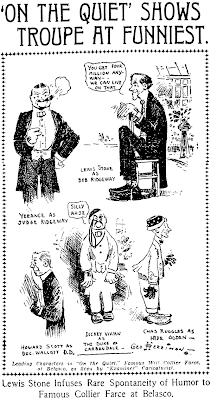 Wednesday, October 23 1907 -- William Collier's play "On The Quiet", originally staged on Broadway in 1901, has made its way to LA where it plays to rave reviews ("two dollars worth of laughs for six bits"). Herriman sketches the leads, including a very young Charlie Ruggles. Ruggles went on to make over 100 movie and TV appearances, and it all started right here in li'l ole LA. 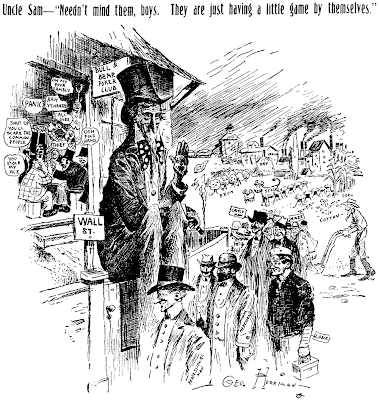 Thursday, October 24 1907 -- It's been a long while since Herriman contributed an editorial page cartoon to the Examiner, but now that baseball season is over he'll start getting a few at bats, as it were. For his first return engagement to that page in months he treats us to a masterful portrait of a gentle-seeming yet malignant Uncle Sam. Sam is shielding the mischief-makers on Wall Street from the common folk, urging us all to go about our business and pay no mind to the gamblers who hold the keys to our economy. Thank goodness none of that goes on anymore...

I urge you to give that Sam figure an unhurried appraisal. A lesser cartoonist could have drawn that a hundred times in a hundred ways and not come up with something that so effectively gets the message across. Amazing work.

That's very diffrent from when he played Judge Hardy in the Andy Hardy series.