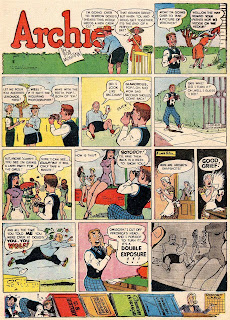 Jeffrey Lindenblatt, publishing impresario, microfilm maven and good friend of Stripper's Guide, has a few questions on his mind. Can you assist?

* Jeff is looking for early Archie dailies for an upcoming publishing project. The early years of the strip, especially the daily, are extremely hard to find and he is looking to fill gaps in 1946. If you can help, reply here or email me for Jeff's contact info. Jeffrey is not only looking for tearsheets but even any leads to newspapers that ran the strip in that first year. According to a 1946 E&P ad it was picked up in a lot of major cities in 1946, but it seems like many of them paid for it but didn't run it (not all that unusual in the days of exclusive territories).

* Jeffrey is also a little perplexed about the comic strip Dan Dunn. While doing some research on NewspaperArchive.com, he found that, as is well-known, the strip was dropped in favor of Alfred Andriola's new strip, Kerry Drake, by Publishers Syndicate, in October 1943. However, detective Dan didn't rest. Instead his adventures were reprinted in quite a few newspapers as late as 1950. Jeff and I agree that this isn't really typical of Publishers Syndicate to sell a strip in reprints -- so why did Dan Dunn have this long reprint run? Anyone have any ideas?

* Last but not least, Jeffrey wonders if anyone has seen copies of an odd weekly newspaper called Favorite Features that was published in New York City starting July 12 1967. It ran pretty much just syndicated columns and comics. It seems to have been short-lived.

Comments:
A googlenews search shows a Pittsburgh Post-Gazette promo saying that Archie will start in that paper beginning February 4, 1946.
http://tinyurl.com/ylnlufm

Viewing that paper dated later in 1946 shows it actually was running there in that year.

Hello. Allan----Bob Montana was one of the all-time greats. He had a wonderful talent for timing, expressions, and positioning. Best of all was his consistant and truly funny writing on the strip. Many successful, long-running comics waddle on for years without ever being really funny. I can't imagine anyone ever actually laughing at a WINTHROP, SMITTY, NANCY, SHORT RIBS, and about a million more. ARCHIE, however, gave me many real laughs under Montana's stewardship. he aggressively tried to be funny. He depicted jealousy, vengeance, stupidity, and slapstick----all thrown away after Montana's death in 1975. Today it's just an unsigned hack job, a humor-free parade of copyrighted trade marks, strictly politically correct. To effect this holy goal, those Riverdale rascals just don't do anything anymore. (If your characters just stand around and make puns, you can be safe not to offend anyone. ) It's as bland as most modern strips.----Cole Johnson.

Allan, You observe that it wasn't typical for Publishers Syndicate to sell a strip in reprints, as it did with DAN DUNN, but was such a practice typical with other syndicates back in the day? Any idea of how many strips, like PEANUTS today, have lived on for years as reprints?

Hi Dave --
Surprisingly, not many strips were sold in reprints 'back in the day', and when they were they were rarely classics like Peanuts. Syndicates sold their backstock of lackluster strips mostly to hole-in-the-wall type outfits who then resold the material cheap to small rural papers. International Cartoon Company, for instance, bought from several syndicates -- George Matthew Adams, Associated Newspapers and even occasionally a minor feature from the big boys like Hearst and Pulitzer (which leads me to think that maybe the cartoonists took their drawings with them after their series was cancelled and sold it to International themselves).

Only Bell Syndicate seemed to make it an established practice to sell reprint rights; they had a deal with Western Newspaper Union that lasted for many years.

Thanks for the info, Allan. My local weekly paper (one of those community giveaway papers; I live in suburban Cleveland, Oh.) occasionally will toss in a few comic strips in the back pages, and sometimes they'll use POPEYE, which always amazed me because they were just using a single daily strip on a random basis. But then I learned the POPEYE daily itself has been in reruns for nearly 20 years, so it must be available pretty cheap these days.

Was FAVORITE FEATURES just something put out during a newspaper strike to keep the strips and columns in print in N.Y.? Something to do with copyrights or something?---Cole Johnson.

Hi Cole --
That may well be the case. That WAS a bad time to be a newspaper reader in NYC with all those strikes!