A Gag for Comic Strip PhDs 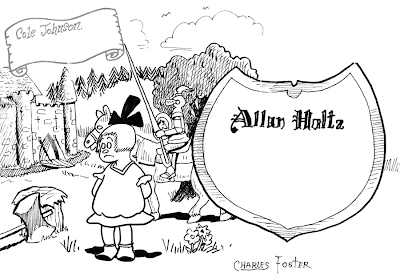 Cole Johnson occasionally sends me envelopes stuffed full of obscure comic strip goodies, which are always a wonderful treat -- just about the best present anyone can give to the Stripper (though a cherry 1968 Thunderbird 2-door coupe or a Wacom Cintiq 21UX pen display would also be quite welcome, thanks).

But Cole doesn't just send goodies inside the envelope. Many of them are decorated on the outside with delightful cartoons -- they're eagerly anticipated by all at the Holtz household, not to mention our mailman, too. This particular one arrived a little while ago, and I just can't keep it to myself. It gave me quite the belly-laugh. Of course to get the joke you have to be pretty darn well-versed in your comic strip lore. Even my wife, comics expert by proxy, didn't get the gag. Do you?

Rather than explain it, I leave it up to you folks. Who amongst you will take the challenge to explain the gag? First one to post a blog comment explaining the gag to my satisfaction earns a goodie box of comic strip stuff delivered to your door.

Comments:
The girl is Dorothy Darnit, drawn by George McManus' brother Charles McManus, correct? And the style is done in Prince Valiant/Hal Foster mode....don't know if the ax is supposed to represent something...I'm supposing Hal Foster had a brother named Charles Foster who was also a cartoonist/illustrator?

It looks like the gag is just a combination of Charles McManus and Hal Foster, or; If a great cartoonist (like Hal Foster or George McManus) had a brother (always named Charles) he would always choose something like Dorothy as his subject, while being influenced by his brother's subject at the same time, hence, the medieval motif in the background.

So I gotta crown Grizedo our comic strip PhD today. Congrats Grizedo, and send me your mailing address so that you can get your box of goodies.