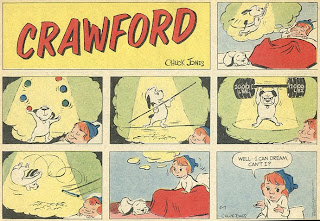 I'm turning over the bully pulpit today to Kurtis Findlay, who is anxious to get your feedback. Take it away, Kurtis:


Did you know that animator Chuck Jones had a short-lived (less than a year) comic strip in the late 70s? Crawford  is a strip about two young boys who contemplate the world of being kids.

I am seeking a publisher that would share my vision of collecting the entire run of the strip in a hardcover format, like many of the reprint anthologies that have come out recently. I hope to include supplemental material such as sketches, unused strips and promotional material, should any of this turn up in my research.

In order to gain the publisher's interest, I am attempting to gauge the interest of the general public. Would you be interested in a complete collection of Chuck Jones' Crawford? Please leave a comment below!

Also, if any of you comic strip researchers have any material that I can use in my book, please send me an email at kurtis@coveringthemouse.com.

Allan back again. Please be sure to leave a comment if this sounds like a book you would be likely to buy. Needless to say, I think it a very worthwhile project. Chuck Jones is universally acknowledged as a master of animation, but few have been lucky enough to see his short-lived newspaper comic strip. This strip is so rare that most dedicated fans of Jones speak of it as a myth if they've even heard of it at all. I'm enthused at the possibility of a book that reprints the 6-month run of this legendary feature, and I know many comic strip fans would jump at the chance to see it for themselves. I can only imagine the even greater excitement among animation fans, for whom every tidbit of Chuck Jones' work is precious -- for them Crawford and Morgan must seem like a parchment from the Dead Sea scrolls.

Comments:
I applaud and support all such efforts, although it would not have been my first pick.

I just now posted about this on my blog so that even more people can click over here and know about this. That said, if it was a standalone volume focused only on this strip, I'd agree with my friend Ger: it would not be too interesting to me. If it was a book about Jones' non-animation work -- maybe other failed attempts at syndication, etc. -- well, THEN it would be a trove of new and fascinating material.

Thanks for your comments, and a big thank you to Allan for letting me post his question here!

The book will be a standalone volume focusing on Crawford, but I hope to include plenty of Jones artwork and other material relating to the strip. There will be plenty of supplemental material (hopefully, as long as it comes up in my research).

Crawford has an interesting origin story that is even less known than the strip itself! But I'm not saying it here! You'll have to wait for the book!

What Would Chuck Do?
A comic strip created by the great Chuck Jones lasted only six months, I'd suspect it was a train wreck and Chuck would rather let this wither away unseen.

I'd rather see his great work than his work that was less than worthy of six months in a newspaper.

I'd love to see it. Please keep us posted.

I might be interested. Kind of depends how deep my pockets are when the book comes out.

I was not aware of this strip.

I'm behind all endeavors to preserve, though currently there are so many books out on cartoonists that are more masters of the medium (Milt Gross, Basil Wolverton).

Chuck was a master director of animation, but that's a wholly differect medium...I'm not so sure he was cut out for stripping. I also think he had gone past his creative peak by 15 years before Crawford.

Although I have no interest in the subject, this book would probably attract animation students/aficionadoes, and Chuck Jones fans and completists of his work.

Yes, I would buy the book. The length of time a strip lasts in the newspaper has nothing to do with quality. I suspect animation offered more to Mr. Jones than a newspaper comic strip.

Both Fantagraphics Books ("Betsy and Me", "Peanuts") and IDW ("King Aroo", "Rip Kirby") are releasing many new books on old and sometimes forgotten strips. Failing to get their interest, Maybe you should try Lulu and self-publish.

I'm kind of interested in it. Who knows, it might shed some interesting light into Jones's life at the time of the strip.

If the sample above is as good as it gets, I'd say let that sleeping dog lie. Art: A+. Story: C-.

I don't know squat but maybe Apple would dig this. You'd think that Apple has a lot of Chuck Jones fans working there. It would make a nice iBook and they could promote it easily. Getting the rights and material is another story but they might have an in there already as well.

Just an idea. An eBook would make this project easier.

Looks like this project actually got of the ground. Chuck Jones : The dream that never was.