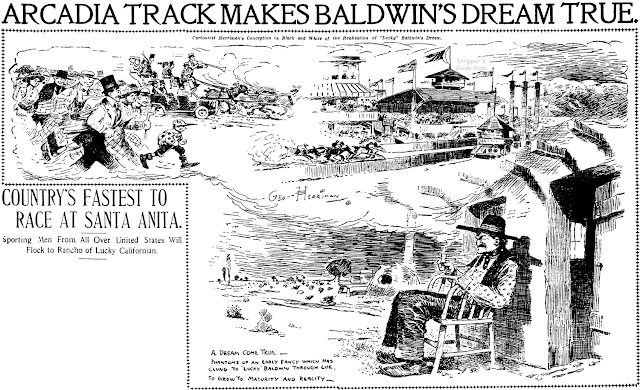 Sunday, November 17 1907 -- Lucky Baldwin came to California in the 1850s and took the smart route of providing services to gold miners rather than prospecting himself. He ran a hotel and stable in San Francisco. In payment for a debt he took shares in the Ophir Mine, essentially worthless at the time. In 1859, though, when the Comstock Lode was discovered, he became a wealthy man as Ophir operated a mine adjacent to that major find.

Baldwin used his wealth to indulge an interest in horse-racing, and was quite successful at it. In 1907, as seen in the cartoon, he opened Santa Anita Park, a racetrack with all the most modern amenities, including electric lit stables and a parking lot for automobiles.

Lucky died in 1909 and eventually his racetrack was closed. However, the facility was later upgraded and re-opened in 1934 to become the Santa Anita Park we know today, one of the most famous tracks in the world.