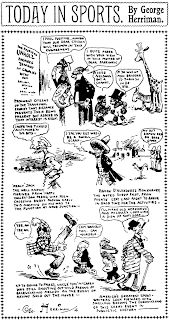 Tuesday, February 4 1908 --The Unholz-Nelson fight is today, and in Herriman's Today in Sports feature he eschews the usual round-up approach to his coverage and concentrates the whole space on this boxing story. 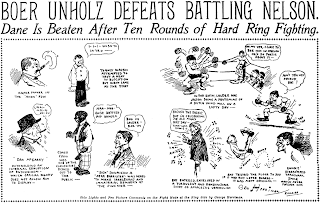 Wednesday, February 5 1908 -- The fight is over and Unholz has bested Battling Nelson in a 10-round decision. Nelson went to the mat in the first, but there is question about it being a slip than an actual knockdown. According to observers, Unholz did make a great showing, and despite the winner being unofficial (a city ordinance somehow forbade it), there was no question of which of the two had earned a shot at Joe Gans. However, both fighters would end up in the ring with Gans before the year was over.