Haile Thurman Hendrix was born in Warrensburg, Missouri on March 18, 1897. The information is from Susan Craig's Biographical Dictionary of Kansas Artists (active before 1945). Craig's entry for Hendrix was based on Lydia Sain's manuscript on Kansas Artists from 1932 to 1948. According to the California Death Index at Ancestry.com, Hendrix's first name, Haile, was his mother's maiden name. His mother, age 5, was found in the 1880 U.S. Federal Census. In that census the family name was spelled "Hale"; notation on a family tree said the correct spelling was "Haile."

In the 1900 census, the Hendrix family lived at 705 Olive Street in Madison, Missouri. He was the oldest of two children born to John and Minnie; his father was a blacksmith.

The family lived in Wellington, Kansas at 117 Tenth Street, at the time of the 1910 census. Details of Hendrix's education and art training have not been found. In his late teens or early twenties, he moved to New York and found work. On June 24, 1919, the Fort Wayne Journal Gazette (Indiana) reported what he was up to: 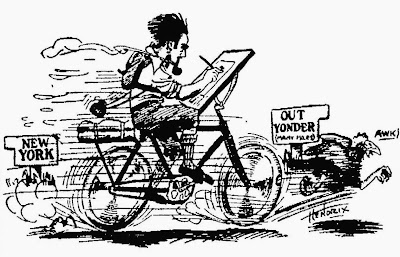 Riding From Coast to Coast on a Bicycle

Haile T. Hendricks [sic] arrived in Fort Wayne last evening from Toledo, Ohio, where he visited the Willard and Dempsey training camps and where he had interested interviews with both fighters. He rides a bicycle and is enroute to San Francisco, from New York city. He is making the trip on a wager that he can complete the entire distance of 3,000 miles in less than 90 days. The wager stands $1,000 to $800 in Hendrix's favor, providing he wins. In fourteen days he has been on the road he has loafed four days, spending the time in Philadelphia, Cleveland and Toledo. He expects to complete the trip in less than three months. Thus far the young man, who is but 22 years of age, had no tire trouble covering the 850 miles without changing tires.

He left New York penniless and makes his expenses by making pen sketches of things he sees along the road. These are sold to newspapers and other publications. Hendrix is a cartoonist and was formerly connected with New York newspapers.

The date of his arrival in San Francisco is not known; it could have been from late July to mid-August. Apparently he stayed briefly on the west coast then returned by train to New York. Hendrix has not been found in the 1920 census. He moved Los Angeles, California. The Omaha World Herald (Nebraska) published an article about Hendrix on August 5, 1923.

Does Viola Dana's Portrait in Batik

Viola Dana whose latest starring vehicle, "Her Fatal Millions," is at the World theater, has had her portrait made in batik by the originator of the process, Haile T. Hendrix, of Greenwich Village, who lately has come to Los Angeles. Mr. Hendrix has wandered far in search of suitable subjects for the practice of his art. He has not traveled on a train since the summer of 1919, preferring to hike from one part of the country to another "when the spirit moves him," which is often, he says. Miss Dana had the honor of being the first person in Los Angeles to have her portrait done by Mr. Hendrix.

…More than six years ago Mr. Hendrix determined to make portraits in batik. He finally succeeded after ruining acres of silk.

The portraits in batik are waxed and dyed for every color. The one of Miss Dana contains six colors. Even yet the process is delicate and prolonged. Mr. Hendrix spent twenty-five consecutive hours in making sketches transferring Miss Dana's likeness to batik, stopping only long enough for coffee and cigarets.

Edan Hughes, author of Artists in California, 1786-1940, said Hendrix did cartoons for the Los Angeles Express newspaper in 1924. In the mid-1920s, he worked on the panel, Famous Fans. According to the 1930 census, he was 30 years old (1927) at his first marriage. His first wife may have been journalist, Dorothy Roe. The University of Missouri Bulletin, Issue 50 (Missouri Alumni in Journalism), 1967, on page 68, had this listing: Roe, Dorothy (See Mrs. Haile T. Hendrix). In 1928, he drew and wrote a series of portraits of prominent people in politics; below, a sample from the Daily News Standard (Uniontown, Pennsylvania), October 5, 1928. When it started and ended has not been determined 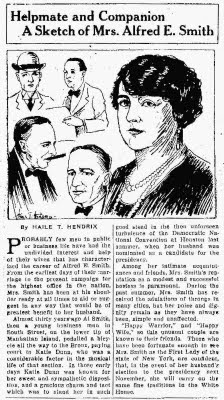 In 1930, Hendrix lived alone at 39 East 11th Street in Manhattan; he was a cartoonist for a newspaper. In 1936 he drew attention to himself as reported in the New York Post on January 7.

Those impolite stickers lambasting the Roosevelts, which are being circulated by the National Republican Council, were produced by an artist on the WPA rolls, it was learned today.

The artist is Haile Hendrix, a little man with a very big mustache, who concedes freely that the stickers are in bad taste but points out that the National Republican Council had money to pay for them and the $103.70 a month he gets from WPA for teaching cartooning doesn't go very far.

"Sure, they're in bad taste," he said. "They represent a collaboration by Lambert Fairchild, William Ingles and myself. I suggested a bunch of ideas, we mulled over them and they picked the five they like."

Mr. Hendrix is thirty-eight, a native of Kansas [sic] and a former newspaper cartoonist. He has no political affiliations, he made it clear.

"I am an artist," he explained, with dignity. (see photo, below) 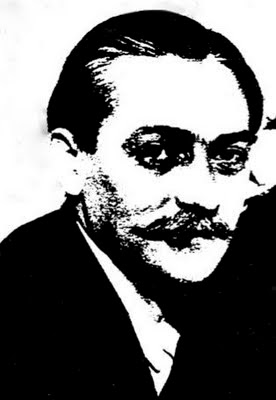 On January 1947, Hendrix's first issue of Caricature appeared in Greenwich Village; he held the copyright according to the Catalogue of Copyright Entries, Third Series, Volume 1, Part 2, Numbers 1 & 2, Periodicals 1946-1947. The date and place of his second marriage is not known. A 1951 New York passenger list recorded him and his wife, Shirley, on their return from Bermuda on March 17, 1951; they lived at 128 West 13th Street. Hendrix passed away on August 12, 1953, in San Diego, California. The New York Times published news of his death the following day.

Mr. Hendrix came to San Diego last June. He was at various times caricaturist for The New York Herald-Tribune and The New York World-Telegram. Earlier he had been a reporter for newspapers in Los Angeles, New Orleans and Dayton.

He is survived by his widow, Shirley, and a daughter, Jo Anne, of New York.

Comments:
I have recently been researching Haile Hendrix due to coming across a cached of letters he wrote 1923-24. The collection also includes a number of portraits of him and pictures he took in LA. I have found quite a bit more information on him than what is given here. Especially interesting finds from my research: I have located and communicated with his only child (still living) and, amazingly, a half sister who is 42 years his junior. If anyone is interested, I am happy to share my findings on him.

I'm looking for a cartoon he drew in 1923 for the Los Angeles Evening Express? Is it possible you would have it?

I seriously doubt it-- I just have a few Hendrix cartoons and they are all ones I have found online. His original sketches in the letters I mentioned are more just illustrative doodles. What is the subject of the cartoon you are seeking?