Harry Cornell Greening was born in Titusville, Pennsylvania on May 30, 1876, according to Who Was Who in America: With World Notables, 1969-1973 (1973); his World War I draft card has the same birth date. In the 1880 U.S. Federal Census, Greening was the oldest of two sons born to Samuel and Margaret, and they resided in Titusville, Pennsylvania at 56 Monroe. His parents were Canadian and his father was a traveling salesman. Who Was Who in America said he had a public school education, “attended night class Art Students' League, New York. First work appeared in New York Herald, 1896, and sold drawings to Truth and Life same year; on staff New York Journal comic supplement, 1898; subsequently connected with Judge, Puck, Life, Harper's, Scribner's, etc.”

In 1900 the family lived in East Orange, New Jersey at 38 Hollywood Avenue. Two more sons were in the family. Greening’s occupation was cartoonist. Who Was Who in America said he was the “originator of various comic series, including Prince Red Feather series for St. Nicholas; drew Percy page series for New York Herald.” Other strips, this decade, include Joco and Jack, Uncle George Washington Bings, and Prince Errant. 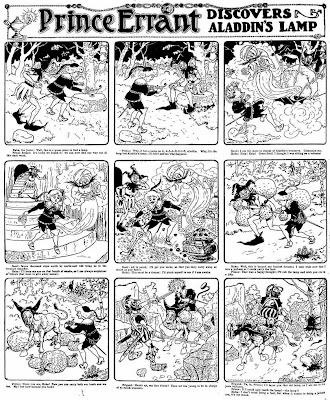 In 1910 Greening, his parents and youngest brother stayed in East Orange at 9 North Grove Street. He was a cartoonist for periodicals. His strip, Majah Moovie, for the New York Herald, was advertised in the Evening Post (New York) on December 19, 1914; from the ad: “A new comic in full colors by H.C. Greening, ‘Majah Moovie’ wishes to preserve a reel diary for posterity and prepares everything in advance.” In 1918 his strip Fritz von Blitz was published. He signed his World War I draft card on September 9, 1918; his occupation was cartoonist at the New York Herald. His description was tall height, medium build with brown eyes and hair. Who Was Who in America said he “was officially sanctioned by the U.S. Govt. and was used abroad for the A.E.F. [American Expeditionary Force]; made cartoons for the govt.”

The family of four remained at the same address in 1920. Greening was still a newspaper cartoonist. According to the World Encyclopedia of Cartoons (1980) he drew “for the McClure Newspaper Syndicate (a kid strip, Eb and Flo) and the Illustrated Daily News of Los Angeles. He was the inventor of Sporty Sam and Funnyfishes toys and developed the Wishbone Man Game, which was based on his Eb and Flo strip, as was a storybook.” [Allan's note: I can find no evidence that The Wishbone Man was ever officially titled Eb and Flo or syndicated by McClure -- as best I can tell it originated with Cornelius Vanderbilt's CV Syndicate]  The Catalog of Copyright Entries, Part 1, Books, Group 1, New Series, Volume 21, Number 71, October 1924 has an entry, on page 640, for Greening.

The date of Greening’s move to Los Angeles, California is not known. He was recorded in the 1930 census as a newspaper cartoonist in Los Angeles at 335 Fremont Avenue. He was in the news when a drawing of him was returned; the Times-Picayune (Louisiana) had the story on April 4, 1930.

Artist Gets Lost Drawing by Caruso
(By the Associated Press)

Caruso autographed the picture, sent it to Greening, and a few days later it disappeared. Wednesday, from New York, Greening received the sketch in a letter, which did not disclose the name or address of the sender.

The date and place of Greening’s death is not known at this time. The World Encyclopedia of Cartoons said it was circa 1930, while AskArt.com has it at circa 1945. Greening was alive in 1941 and lived well into the 1940s. The New York Times published a death notice, on December 5, 1941, on his youngest brother.

The New York Times published, on May 9, 1945, a letter from Greening who wrote, on April 26, from a New York address. On the September 12, 1945 letters page of The Sun (New York, N.Y.) a reader responded to a Greening letter regarding British food. It appears Greening moved to New York City in the 1940s.

Greening was mentioned in the end notes of the book, The Unknown Night: The Genius and Madness of R.A. Blakelock, an American Painter (2003). The Encyclopædia Britannica said artist Ralph Albert Blakelock, “suffered a breakdown in 1891 and spent most of the remainder of his life in New York state mental hospitals. During his confinement his fame burgeoned, and his paintings began to bring high prices. The National Academy of Design made him an academician in 1916, three years before his death.”

The Unknown Night has a chapter on Blakelock’s time in East Orange, New Jersey, where Greening once resided. When Blakelock was released from the asylum it was a major news story, and no doubt, Greening was aware of it. He corresponded with New York Times art critic, Edwin A. Jewell, and two of his letters are noted in the book on page 324, “…letter from H. Cornell Greening to Edwin A. Jewell, 1/13/1942…”; and “Letter from H. Cornell Greening to Edwin A. Jewell, 1/4/1946…” Greening was mentioned on page 325, “…More reliable, in this case, is H.C. Greening, who lived across the street and described the 'extensive' Johnson garden, where he said Blakelock had a studio.”

City Is Given Boost in Ed Sullivan’s Column
The City of Glens Falls is highly complimented in a letter printed in Ed Sullivan’s famous “Little Old New York” column in the New York Sunday News. The letter, which classifies Glens Falls “as neat a little town as we have in this country.” follows:

“Dear Ed: Noted you line that your family comes from the Saratoga country of New York State, and like it. Me too. I've lived all over the world, excepting Australia, but I know of no finer place than this section. Never had an appetite, yet landed in this section, I want six meals a day, including a double breakfast. My great, great grandfather, Col. Robert Harpur, had a “farm” of 180,000 acres up near Saratoga, according to a book in the public library. He was born in Scotland, went to Dublin U. as a professor, fell in love with the Irish and when he came to America to joint the staff of Kings College, he got the idea of bringing over large groups of Irish. He was a man of means, so he brought over three shiploads of immigrants and put them to work raising flax. How this turned out I don’t know, but Troy, Amsterdam and many other towns in upstate New York still specialize in shirts and collars. Glens Falls, near Saratoga, is as neat a little town as we have in this country. Cordially, Cornell Greening.”

He was not listed in Manning’s Glens Falls, South Glens Falls, Hudson Falls and Fort Edward [New York] Directory for the available years 1941, 1942, 1944, 1946, 1948 and 1949. He was alive in 1946, and, apparently, into the following year. The FictionMags Index has a listing for the periodical, Blue Book, February 1948, which had an article, “New Evidence”, written by Cornell Greening and Richard March; it was about “curious circumstances in the life of John Booth just before his crime.” What became of Greening is still a mystery.

Sold my copy of "The Wishbone Man" many years back, sometimes to my regret. It had a few pages of prose about a Knight Errant and then launched into the strip reprints. Well done little landscape title with a picture and quote from young Jackie Coogan on the dustjacket, and another quote by Cornelius Vanderbilt on the back. Seems to be quite rare these days, which explains why I got such a nice price for my copy.