Gerald W. "Jerry" Stewart was born in Pine Bluff, Arkansas on May 18, 1923, according to the Social Security Death Index and an obituary in the Fort Wayne News-Sentinel (Indiana) on October 30, 1995, which said "he moved to Fort Wayne one year later."
In the 1930 U.S. Federal Census, Stewart was the oldest of three children born to William and Evelyn. They lived in Fort Wayne, Indiana at 1823 John Street. His father was a "car repairman" for a "rail road shop." Polk's Fort Wayne City Directory 1937 listed the Stewart family at 327 Melita Street.
The U.S. World War II Army Enlistment Records, 1938-1946, at Ancestry.com, show Stewart enlisted on February 26, 1943; he had two years of college; his civil occupation was porter; his height was 65 inches and weight, 124 pounds. Polk's Fort Wayne City Directory 1945 recorded Stewart and his father on page 493.
Stewart GW USA r327 Melita
Stewart Wm (Evelyn B) reprmn PRR h327 Melita
After Stewart's initials it said "USA" which, I think, referred to his service in the Army; he was a resident at the address. His father's listing included his mother's name, his father's occupation as repairman for the Pennsylvania Railroad, and home address. Indiana's Laughmakers: The Story of Over 400 Hoosiers: Actors, Cartoonists, Writers and Others (1990) profiled Stewart and wrote, "Stewart joined the News-Sentinel as a copy boy on March 25, 1946. He was promoted to staff artist three months later." The News-Sentinel obituary said, "Stewart was the first minority hired by The News-Sentinel and was a pioneer in the newsroom." His listing in Polk's Fort Wayne City Directory 1946, page 547, was, "Stewart Gerald W (Manda R) artist News Pub Co r327 Melita". Stewart married some time in 1945 or 1946. His listing was the same in the following years through 1949.
Polk's Fort Wayne City Directory 1950, on page 539, recorded him as, "Stewart Gerald W (Amanda R) artist News Pub h915 Horace". His comic panel, Little Moments, debuted in 1961. 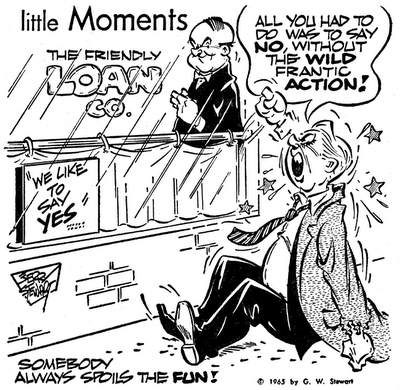 Indiana's Laughmakers said, "In 1986 he received the Indiana Journalism Award from the Ball State University journalism department. In 1986 he retired after 40 years with The News-Sentinel. He and Amanda, his wife of 40 years, plan to remain in the Fort Wayne area, where Stewart continues to serve as a volunteer art teacher for inner-city children…" (The profile was based on the article, "Artist's 40-year Career Draws to a Close Today," published in The News-Sentinel, on May 30, 1986.)
Stewart passed away on October 29, 1995, in Fort Wayne, according to the Social Security Death Index and News-Sentinel obituary.

Comments:
I remember seeing Stewart's cartoons quite often when I was growing up, but I have to confess that his style didn't appeal to me back then. He had at least one or two books published locally, and it was always interesting to know that we had a real, live, local cartoonist amongst us.