The Camera, July 1925
Walter R. Bradford, the creator of those inimitable cartoons of the "Pickleweights," "Scow," "John Dubalong" and "Jingling Johnson," which featured for so many years in the daily pages of the North American, died at his home in Philadelphia, June 4th, of tuberculosis, against the inroads of which he had courageously fought for months, arousing the admiration of his associates by his heroic cheerfulness and unabated flow of humor.
The closing down of the North American, however, was a severe blow to him, as it seemed like a separation from all that he had so delighted in for years. His desk had become his playground as much as his workshop. When his newspaper passed to the hands of the Public Ledger, Bradford was the radio editor, and his creations in that role were of the same subtle humor which characterized his exploits in other roles.
Walter Bradford was 53 years old. He was born in Dayton, Ohio, and began work in the Studebaker Carriage Works, at South Bend, Ind., but his inherent talent for sketching led him to attend the night classes for instruction in drawing and inadvertently to the [missing text] John T. McCutcheon [missing text].
He worked for some time on the Chicago Tribune and the North American, shifting to theBaltimore Herald, finally settling down again with the North American. Bradford's whole soul was in whatever he undertook and he enjoyed the children of his own brain probably as much as those who eagerly waited for their performance in the daily issue of the paper. 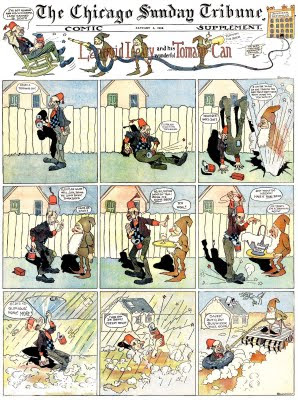 Leary and his Wonderful Tomato Can
Mr. Bradford said he loved his work and got fun out of his characters as if they had actuality. Enoch, Maria, Dill Pickleweight and Scow, the black cat. Walter Bradford's cartoon-sketches had an individuality. His characters remind us of the characters of Charles Dickens. They not only were intensely humorous, but they had that touch which made them real, reflecting the traits and frailties of human nature with geniality and sympathy, which made them more than comic representations, for Bradford had a fine mental organization and a subtle apprehension for the best in human nature, which he reflected in his cartoons. There was never anything cynical, for his sympathetic, kindly nature was foreign to anything pessimistic. Bradford was well read in English literature and could discourse on authors and analyze in a way that would have given him renown as a literary critic. He was an expert photographer and a pictorialist and his work possessed individuality of treatment, reflecting his peculiarity of temperament and his judgment in selection. He contributed papers to The Camera, written in his humorous style and illuminated by most original photographs, and arrangements were being made for his connection with the editorial staff when the sad news came of his death.
Walter Bradford's ability as a critic in art rendition by the camera gave occasion frequently for invitation to serve on jury awards, and his decision evinced sane judgment in analysis.
While insistent on the necessity of conformance to the time-honored rules and principles of art, he was broad in his views and appreciated all the advances made by the new photography, and was unbiased in his estimation of individuality of expression. Although he never put his own work in competition, it was characterized by possession of taste and originality and emphasized by the personal equation.
His literary contributions to the photographic journals were instructive, though instruction was conveyed in an Aristophanic way, which was most delightful, accompanied by illustrations intensely funny, but hitting off to perfection the idiosyncrasies of pictorial cults.
He is survived by his widow, who was born in England, and his son, William Bradford. 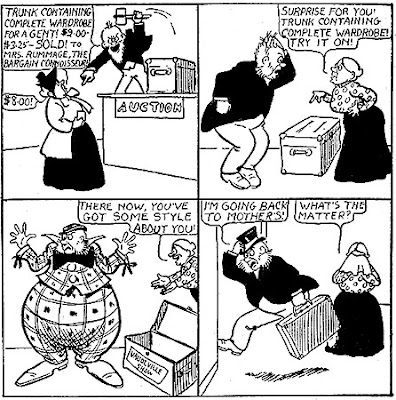 Mrs. Rummage
[Walter R. Bradford was born in Dayton, Ohio in May 1872, according to the 1900 U.S. Federal Census and numerous obituaries. In the 1880 census, Bradford was the youngest of five children born to Harry and Sarah. They lived in South Bend, Indiana at 46 General Taylor Street. His father was a painter.
In 1900 Bradford lived in Chicago, Illinois, at 301 Osgood Street, with his wife Sara, of six years, and son William. His occupation was recorded as typewriter. (Bradford's playful sense of humor at work!) At the Chicago Tribune, he produced Animal Land and Languid Leary and his Wonderful Tomato Can, and helped out on the strip Alice's Adventures in Funnyland. Some of his strips for the Philadelphia North American were Doctor Domehead, Tommy Tuttle, The Geteven Youngsters, and Fitzboomski the Anarchist.
In 1910 they were recorded in Philadelphia, Pennsylvania at 1245 56th Street. Bradford was a newspaper cartoonist, and ten years later, he was still cartooning but in Willistown, Pennsylvania on Monument Road. Bradford passed away on June 4, 1925, in Philadelphia. Cartoons & Movies published an obituary in its June 1925 issue, which has some of the art training information that is missing in The Camera article.]