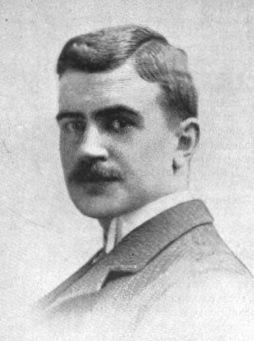 
…Edward Windsor Kemble was born in January, 1861, in Sacramento, California, and went to school in New York city. His first attempts at drawing are still preserved in an old copy-book, dated 1872, which is filled with sketches of Indians taken when traveling in the west with his father. Some of his western sketches from life have been accepted for publication, he began to think seriously of art as a profession, and in the winter of 1880-81 he joined the sketch class at the Art Students' League.


"I don't know what good it did," he said to me in talking over his career, "for no one ever looked at what I did."


At all events this was all the art schooling he received. "The way to draw is to draw," became his maxim, and he plunged into practical work, earning his living at once by what he did for the Daily Graphic. For three or four years he made pictures of whatever came before him. Art work for a daily journal admitted of no great refinement, but it made him quick to seize the graphic point in what he saw, and he put his apprehension to such purpose that when Life was founded, in 1883, his work was accepted, and for the next few years, in company with Mitchell, Atwood and Hyde, he was a constant contributor.


Although to-day Mr. Kemble is so closely associated in the public mind with negro sketches, this particular field is by no means his ambition. The negro was an accident with him. Among the Life contributions were the comic skits entitled "The Thompson Street Poker Club," negro dialect stories. Kemble drew the sketches, which were deemed so good that publishers have kept him at them ever since. His negro successes brought him an order for the illustrations for "Huckleberry Finn," his first book, in 1884, and soon after that the Century made him an offer for all his work outside of book illustrations. During the next six or eight years the negro still pursued him, as he puts it, or, to be more just, he still pursued the negro. Between 1884 and 1891, when he left the Century, the movement in recognition of the South in literature found its ablest artistic coadjutor in E.W. Kemble."Uncle Tom's Cabin," in its luxurious two-volume edition full of his drawings, "Two Runaways," Joel Chandler Harris's "On a Plantation," and R.M. Johnston's "Widow Guthrie," are among the books dealing with negro life that date from this period. 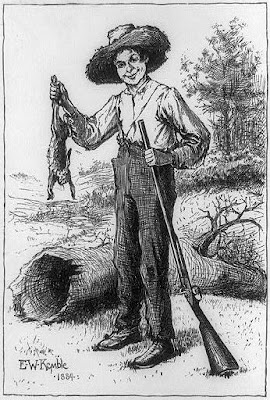 
Kemble's greatest ambition is to make a worthy record of the Dutch period of New York's existence. He has a genuine enthusiasm for the Knickerbocker. He is indefatigable in gathering all that may be found in old prints relating to that period, and some day he will put it to excellent use. He has already made a capital beginning with "Knickerbocker's History of New York," published by the Putnams, but the mine has scarcely been opened, although this is an important work and a great achievement for so young a man. His "well-fed and robustious burghers" strut through the volume with delightful pomposity.


In recent years Mr. Kemble has drawn for the Scribners, the Harpers, for Life, and has done some book work. At his pretty cottage in Rochelle Park, on the outskirts of New Rochelle, he enjoys something of a country life and yet is near enough to run into town at a moment's notice. Sitting in his studio the other day he showed me this dedication of a copy of "Uncle Tom's Cabin":


To Mr. Kemble, with grateful acknowledgement for his faithful and admirable work in illustrating "Uncle Tom's Cabin." With sincerest good wishes from the author.


In a volume of Riley's "Poems Here at Home," the author has written:


Dear artist friend, this pen of mine
Strikes inky palm in that of thine.


The walls of Kemble's studio are covered with sketches taken on the spot. The rapidity acquired in the old Graphic days serves him now. A trip of ten days south results in several hundred sketches, some of them of but a few lines, but all with a purpose. One page of his note-book is covered with the different hats seen upon a group of loungers at a courthouse door. And such hats no one could devise or remember. A two minutes' sketch of a man or woman is a pretty accurate portrait. Kemble has used the camera somewhat, but prefers the pencil.


"The camera habit," he said, "is a dangerous one. You get to trusting the camera instead of your own eyes. The vital line in a group, a face, or a figure may be just the one that the camera fails to bring out."
P.G.H., Jr. [Philip G. Hubert, Jr.]


(The complete article is here.)
[Edward Windsor Kemble was born in Sacramento, California on January 18, 1861, according to Who's Who in America (1901). The date of his family's move to New York City is not known; Who's Who said he had a public school education there. In the 1880 U.S. Federal Census, Kemble lived in New York City at 441 57th Street. He was the second of three sons born to Edward and Celia; his father was an operator in the telegraph industry. Kemble and an older brother worked in a telegraph office. According to the 1900 census, he married when he was 24, which was in 1885. Who's Who identified his wife as Sara Briggs of New York.


In 1900 Kemble and Sara had four children and lived in New Rochelle, New York at 31 Boulevard, Rochelle Park. His occupation was artist. Ten years later the family remained in New Rochelle but at 19 Boulevard. He was an artist making cartoons, and his oldest son, Edward was an illustrator. (Note to researchers: For some inexplicable reason, Kemble's name in the 1910 census was recorded as "Windsor, Edward"; the enumerator did not record his surname as Kemble. In the 1900 and 1910 censuses, the family's first names match and almost all their ages are ten years apart.) The Century Magazine, in its July 1913 issue, profiled the artist Frederick Remington and wrote of his friendship with Kemble. On May 17, 1914 the New York Times reported on the Lambs Club, a professional theatrical club, and their upcoming extravaganza at the Metropolitan Opera House; it included "a 'contest' between four cartoonists, Winsor McCay, R.F. Outcault, Hy. Mayer, and Ed Kemble, who will try to outsketch each other, all working at the same time…." He also produced cartoons for advertising. 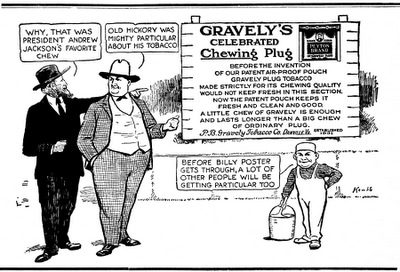 
In 1920 Kemble, his wife and youngest daughter lived on a farm in Patterson, New York on Railroad Avenue. He was an artist and author for a newspaper. He has not been found in the 1930 census. He passed away on September 19, 1933 in Ridgefield, Connecticut. The New York Times reported his death the following day; most of the obituary had the same information found in the Book Buyer profile you just read, so just the first two paragraphs are shown below:


Edward Windsor Kemble, illustrator, cartoonist and author, who made his widest reputation thirty years ago as a delineator of Negro characters, died suddenly at 3 o'clock yesterday afternoon in Ridgefield, Conn., at the home of a daughter, Mrs. Kemble Widmer. For two days he had remained in bed. On Sunday morning he was walking in the garden. He was 72 years old.


Four children survive Mr. Kemble, two sons, Schuyler, a real estate man, of Jackson Heights, Queens, and Edward B. Kemble, an artist of Ridgefield, Conn., and two daughters, Mrs. Widmer and Miss Frances Kemble, also a resident of Ridgefield, as was their father. The funeral service will be held at 3 P.M. Friday at Mrs. Widmer's house.]