Russell H. Patterson was born in Omaha, Nebraska on December 26, 1893, according to a passport application signed on September 30 1920, which was found at Ancestry.com. The application said he lived in Canada from 1894 to 1914. The same birth date was recorded in the Social Security Death Index. His middle initial was recorded on his World War I draft card and passport application.
Who Was Who in America with World Notables (1981) named his parents, William Francis and Kathleen, and said he was a student at St. Patricks School in Montreal, Canada. In Comic Art in America (1959) Stephen D. Becker said Patterson's father:

…would not pay for art courses, but would support his son in the study of architecture. The result was one year at McGill University; Patterson had to leave and go out on his own when a hotel owned by his father burned to the ground. He got a job promptly, taking ads over the counter for the Montreal Star. A staff artist tipped him off to an opening in the sports department with a new weekly, The Standard. Patterson got the job, and was fired almost immediately for turning in too much material and managing to get it printed under the noses of the editors. Patterson took his work to one of the city's French newspapers, La Patrie. They liked it and offered him seventeen dollars a week. As a staffer he did a strip in French called Pierre et Pierrette….

In 1914 he moved to Chicago. Who Was Who said Patterson was a student at the Fine Arts Academy, and Art Institute. He signed his World War I draft card on June 5, 1917. He was a self-employed artist at "1517 North American Building", and named his mother and an aunt as his nearest relatives. According to the card, he served in the Canadian military for three years with the rank of corporal in the artillery. His description was medium height and build with blue eyes and brown hair. Who Was Who said he "served in Royal Canadian Air Force." Comic Art in America said, "After an abortive attempt to join the Canadian Army in 1914—his father and brother went overseas with the first Canadian troops—Patterson went to Chicago, arriving with eight dollars…."
He married Constance Burke in 1918, according to Who Was Who. However, the Missouri Marriage Records at Ancestry.com recorded their marriage in Jackson County on June 28, 1919. On the application her name was "Mary C. Burke" and the same age, 26, as Patterson. (Actually, he was 25 at the time. A "Constance Burk" was found in the 1900 census and her birth date was recorded as "Oct 1891".) 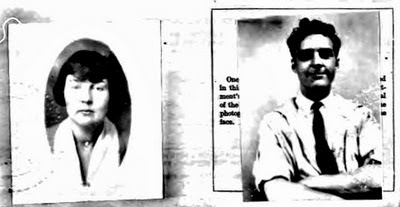 Constance and Russell Patterson passport photos.
Patterson has not been found in the 1920 census. According to his 1920 passport application the couple departed on November 5, 1920, from Montreal, Canada. The purpose was to "visit and study art". A September 1922 passenger list recorded their return to New York City. They had sailed on the S.S. Chicago from La Havre, France on September 19. Their address on the list was "Chicago, Ill. c/o Th. Patterson Fine Arts Bldg". Patterson told a story of his time in Paris in Spooks Deluxe: Some Excursions Into the Supernatural (1956) The exhibition catalogue, The Art of the Comic Strip (1971), said, "…Patterson lived in France, where he studied under the aging Impressionist master, Claude Monet…" On March 19, 1977, the New York Times obituary said of Patterson,

He "started" the flapper, he once told an interviewer, in Chicago around 1926, for no reason other then [sic] that he had read F. Scott Fitzgerald and that as an illustrator, he wanted to create a different look from the bovine types who were models of beauty at the time. The result was the Patterson Girl, the long-legged sophisticate with patent leather hair.

Advertising Arts & Crafts (1926) had this address and telephone listing, "Patterson, Russell, 22 West 49th, Bry 5976". His Runaway Ruth was published in 1929.
The 1930 census recorded Patterson, his wife and daughter Elinor in Manhattan, New York City at 2 West 67 Street. His occupation was artist. The Brooklyn Daily Eagle reported his financial troubles on June 2, 1935.

Russell Patterson, Illustrator, Broke
Russell Patterson of 307 E. 44th St., Manhattan, illustrator, filed a voluntary bankruptcy petition in Manhattan Federal Court yesterday, giving his liabilities as $23,761 and his assets nothing.
Seventeen of the 129 creditors listed were doctors. The largest individual debt was a judgment for $3,532 held by Gates & Morand, Inc., 220 W. 42d St., Manhattan, on a note issued to Ballyhoo Productions, Inc. Patterson was one of five endorsers of the note.
Ballyhoo was a humor magazine -- apparently Patterson had a stake in it.

In the early 1930s Patterson offered advice to a young E. Simms Campbell. Patterson designed sets and costumes for Fox and Paramount Pictures, including "The Gang's All Here," 1931, "Hold Your Horses," 1933, and "Fools Rush In," 1934. He designed Shirley Temple's wardroom in her first picture, "Baby Takes a Bow". He also did sets and costumes for Florenz Ziegfeld's "Follies" and George White's 'Scandals". His work with marionettes was featured in Popular Science (October 1937), and Popular Mechanics (April 1938). Interest in Patterson's marionettes was reported in the Sydney Morning Herald (Australia) on November 2, 1937.
The date of his divorce from Constance is not known. Who Was Who said his second marriage was to Ruth Cleary, a pianist, on August 13, 1938; later, they had a daughter, Russelle. He was one of ten cartoonists and illustrators featured in a Schlitz beer ad published in Life on March 27, 1939.
Comic Art in America said

In 1940 I.J. Fox asked him to design that season's coats; later Macy's called, and he did Christmas-toy windows for five years. Again, he had all the advertising work he could handle. Even the war was no deterrent to him: he designed the WAC [Women's Army Corps] uniforms. He did the interior work on fifteen trains for the Western Pacific; he designed hotel lobbies, decorated restaurants, and in his spare time did a few Sunday pages for metropolitan newspapers, a chore he dropped in 1956.

Patterson's New Adventures of Flossy Frills was published in the first quarter of 1941. In the same year he illustrated some of his wife's musical work, such as Rolito and Little Patriots, A Book of American Songs for Children. The panel Pin-Up Girls began in 1943. He signed his World War II draft card on April 25, 1942. His address was 70 Park Avenue, New York City. He and his marionettes appeared in a Rheingold beer ad printed in the New York Post on December 29, 1944. 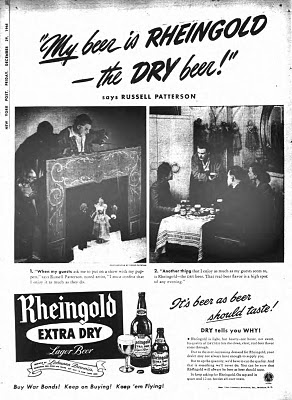 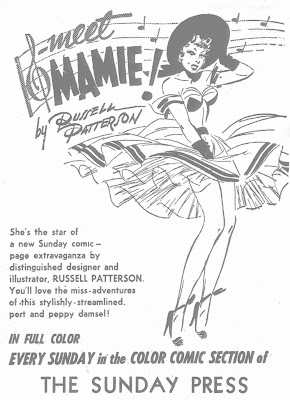 Binghamton Press 7/14/1950
Patterson passed away on March 17, 1977, in Atlantic City, New Jersey. His death was reported in the New York Times on March 19. Patterson was profiled in Stephen D. Becker's Comic Art in America (1959). Joakim Gunnarsson has a blog The Art of Russell Patterson. Fantagraphics Books published Top Hats and Flappers: The Art of Russell Patterson in 2006. Scans of some of his original art is at Heritage Auctions.

Comments:
Hi, I've been working on Patterson on and off for a couple years - kudos to you for unearthing some stuff I never saw before!

I've been working on Patterson's wikipedia entry, and am also happy to find all this information. It's interesting how his military service or lack thereof is represented in various ways. I have seen some of what you list as films listed as Broadway shows at http://www.playbillvault.com/Person/Detail/19693/Russell-Patterson
Regards,
Ken

Also, you may be interested in this photo, which started me on thinking about Patterson today: http://cgi.ebay.com/ws/eBayISAPI.dll?ViewItem&item=370840571535&ssPageName=ADME:B:SS:US:1123

Hello,
My name is Theresa and I have in my possession a framed napkin, original artwork done in watercolor by Russell Patterson to Actress/Singer/entertainer Lillian Roth stating" Thanks for the Notice at the Banshee Lunch...Russell Patterson"
I live in Florida
954-494-4299

I am granddaughter Russelle. His daughter Russelle Patterson is alive snd well in Atlantic City. Aming so many other things, he was the judge of many of the first "Miss America" pageants...