In The World Encyclopedia of Cartoons, Volume 2 (1983) Maurice Horn profiled Albert Carmichael. Like the other profiles in the book, the sources of information were not mentioned. Using Ancestry.com and Google, I found sources that support some of the details in the profile, and I have found information regarding Carmichael's wife and son. What follows are excerpts from Horn's profile of Carmichael. My comments appear parenthetically.

CARMICHAEL, ALBERT PETER (1890-1917) American cartoonist born in Albany, New York, on December 13, 1890. Albert P. Carmichael started his cartooning career with the New York World when he was not yet 17. Among his co-workers on the World art staff were Gus Mager, Jack Callahan and George McManus, whose style Carmichael greatly admired and endeavored to emulate.

(Carmichael's full name is correct. The Washington Post reported, on October 26, 1974, the death of his wife. "Myra C. Carmichael, the widow of Albert Peter Carmichael, a cartoonist for the old New York World, died Thursday night at Sands Point Nursing Home at Sands Point, N.Y. She was 84." The month and year of Carmichael's birth is confirmed by the 1900 U.S. Federal Census. He, his mother and brother lived with his maternal grandmother in Malta, New York. In the 1910 census, Carmichael's birthplace was recorded as "Albany, N.Y." He, his mother and grandmother lived in the Bronx, New York City at 1000 Simpson Street. His occupation was artist at the World.)

Carmichael contributed cartoons and spot illustrations to the columns of the World, as well as a number of panels and comic strips, including Jay Jones and His Camera (1908) and Why Be Discontented (1907), The Ambitions of Sonny and Sue (1908), Our Funny Language, Dr. Spook's Explorations (1909), Rosie, the Joy of New York Life (1911) and…Everybody's Doing It! (1912). Carmichael is best noted for his continuation of McManus's The Newlyweds and Spareribs and Gravy which he took over in 1912. Carmichael died on February 3, 1917, from complications of an appendicitis operation, at the age of 26. 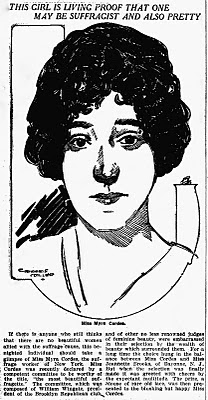 Their son was Albert Peter Carmichael, Jr., and, according to the Social Security Death Index, he was born July 19, 1917 and died October 21, 2001. Myra was pregnant when Carmichael died. The Washington Post said, "She is survived by her son, Albert, an Associated Press newsman and two grandchildren." An assessment of Carmichael's work is here. Carmichael also produced postcards.)

Comments:
Hello, Allan-------Would it correct to assume that Carmichael was actually McManus' assistant? Also, Carmichael took over THE NEWLYWEDS and SPARERIBS AND GRAVY on Sept. 1, 1912, not 1914.

Sorry, didn't proof well enough, error fixed. Now about that Sept. 1 date specifically though ... I have McManus last signing Newlyweds on 8/18. Was there no episode on 8/25, or did we have a mystery guest star that week? And on Spareribs, I have a gap from 8/18 to 9/8. Can you shed any light?

Hello, Allan---The 8-25-12 Pulitzer section features the last SPARERIBS and NEWLYWEDS by McManus, and the last time these features appeared on the cover. (In this case a SPARERIBS episode.) Next week, 9-1-12, are the first Carmichael episodes, although unsigned for a while. And remember, never just use the WORLD ENCYCLOPEDIA OF COMICS for your facts. It's pretty shaky stuff.