Harry Clifford Temple was born in Perry, Ohio on March 3, 1881 according to the Ohio, Births and Christenings Index, 1800-1962 at Ancestry.com. The 1880 U.S. Federal Census recorded his parents and two siblings in Perry. His father was a telegraph operator. He has not been found in the 1900 census, but his parents and two siblings lived in Berlin Heights, Ohio at the time. The Cleveland Plain Dealer reported, on October 29, 1905, Temple's marriage.
Miss Edythe Nina Carvey, daughter of Mr. Judd K. Carvey, was married on Saturday, Oct. 21, to Harry C. Temple of Berlin Heights, O., Rev. Treat of Park Congregational church officiating, and the ceremony taking place at the bride's home, No. 11 Beulah street, at 4:30 p.m. J.W. Carvey, brother of the bride, was best man and Miss Bessie Temple, the groom's sister, was bridesmaid. The bride's gown was of light gray voile with Irish applique trimmings. She carried white carnations. The bridesmaid was gowned in white and carried pink carnations. A horseshoe of autumn leaves hung over the bridal party. After an informal reception and supper Mr. and Mrs. Temple left for the home of the groom in Berlin Heights, where they will remain for a short time before going to make their home in Ft. Wayne, Ind.
How long they lived in Fort Wayne is not known. In 1910 Temple, his wife and her sister lived in Cleveland, Ohio at 1354 East 91st Street. He was a newspaper artist. For the Cleveland Plain Dealer he produced the panel Sketches from Life which ran from September 17, 1913 to November 24, 1926. Some of them were collected in a book Sketches from Life, published in 1915. In the April 28, 1917 issue, Editor & Publisher said, 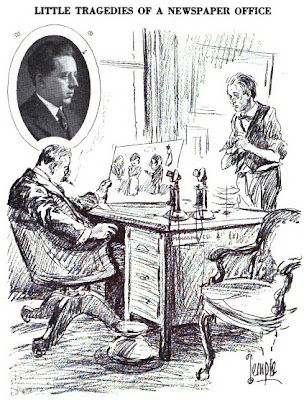 Editor & Publisher 4/28/1917
Harry C. Temple is a country-bred Ohioan, educated in a red brick schoolhouse on an unimproved road. At seventeen he learned telegraphy, and advanced until he became an assistant dispatcher. Later he entered an art school, but returned occasionally to railroad work. Finally he landed with the Cleveland Plain Dealer, where he developed his distinctive Sketches from Life, which have been featured in that paper for several years past, and have been extensively syndicated throughout the country these past three years.
He is a fisherman by instinct, but most of his recreation is work. As his sketches indicate, his principal interest is in folks, every-day folks, of the kind you see wherever you go.
He signed his World War I draft card on September 18, 1918. The home address is illegible. His occupation was artist at the Cleveland Plain Dealer. He has not been found in the 1920 census. In 1930 he lived in Manhattan, New York City at 3 East 27th Street. He was a commercial artist, and his wife was a jewelry craftswoman. On August 9, 1935 the Kingston Daily Freeman (New York) covered his watercolor exhibition.
Gregory Exhibiting Temple Water Colors
Harry C. Temple of Woodstock, has an exhibition and sale of water colors at Gregory & Company, Broadway, for the last three weeks in August.
There is a variety of subjects and each one is handled with sympathetic understanding. Mr. Temple shows a thorough knowledge of color which few artists seem to possess. His "In the Hemlocks" is strong and masterful, while "Nature's Lace" is delicate and beautiful in color in pattern; "Sky Shadows" is dreamy and skillfully handled; "Portland Harbor" brings back pleasant memories and is peaceful and charming.
Each subject has its special appeal and the exquisite harmony and beauty of color make any one of them invaluable as a center of interest in the well furnished room. Then too, they bring close at hand things we all love to see.
Mr. Temple is to be congratulated on his splendid contribution to art.
Temple passed away on November 2, 1962, in Woodstock, New York. His death was reported the following day in the Kingston Daily Freeman.
Harry C. Temple of 79 Yerry Hill Road, Woodstock, died Friday at his residence. He was born in Perry, Ohio and was one of the earlier Woodstock artists. He had been a resident of Woodstock for the past 43 years. Fraternally, he was a member of the Kingston Lodge 10, F&AM and the Woodstock Country Club. Surviving is his wife Mrs. Edith N. Temple. Funeral services will be held Monday 2 p.m. at Lasher Funeral Home Inc., Woodstock. The Rev. Donald Hicks, pastor of the Dutch Reformed Church, Woodstock, will officiate. Burial will be in Woodstock Cemetery.