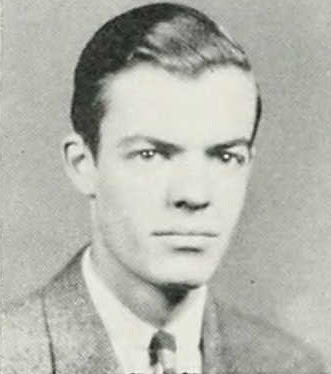 Murray Jones, Jr., I believe, is William Murray Jones, Jr. who was born in Durham, North Carolina on November 5, 1915, according to his Army registration card at Ancestry.com. He was the only child of Murray and Jeanette. According to the 1920 U.S. Federal Census, they lived in Wilson, North Carolina at 310 Park Avenue. His father was a tobacco buyer.
In 1930 they lived in Durham, North Carolina at 1528 Hermitage Court. Information about Jones's childhood art training has not been found. Jones attended Duke University; he was pictured in the 1934 yearbook The Chanticleer. In the 1935 Chanticleer he was pictured (see photo) in the fraternity Alpha Tau Omega. While a student, he contributed art to Caro-Graphics; The Dispatch (Lexington, North Carolina) published one of them, by Jones and Johnston, on November 1, 1934. Jones was listed, at the same address as his parents, in the Hill's Durham City Directory from 1936 to 1943. In Durham County: A History of Durham County, North Carolina (2011), Jean Bradley Anderson wrote:

...While Durham had many practicing artists by the decade of the 1970s, it had not been devoid of native talent in earlier times, and contrary to the contention of the Atlantic Monthly article that the arts were the province of Durham's women, the 1930s produced a group of men who became professional artists. Both the time and the place, however, made earning a living by art impossible, so that if they intended to stick to their last they had to go elsewhere to survive. In that decade appeared Nelson Rosenberg, Eugene Erwin, Ralph Fuller, Jr.*, Murray Jones, Jr., and Nathan Ornoff….

In 1939 when he was 24, Jones registered with the Army, according to his Army registration card at Ancestry.com. He was a student at Duke, and described as six feet and a half-inch tall, weighing 143 pounds, with hazel eyes and brown hair. The Shirley Jones Gallery said, "…Jones entered the Chicago Art Institute in the mid-1930s where he studied painting, drawing and the graphic arts. He graduated with an MFA degree in 1939." The May 23, 1939, Chicago Tribune story, "3 Art Institute Janitors Picked for Trip Abroad", said, "The student-janitors, who won awards of $1,500 each, are: Murray Jones, 24 years old, 17 West H- street, who comes from Durham, N.C…." The Detroit News, January 31, 1998, profiled Jones and said, "Murray Jones received his MFA at the Art Institute of Chicago in 1939, then traveled to Tahiti and Latin America…."
In 1940 he was an instructor at the Summer School of Painting in Saugatuck, Michigan, according to ads in Arts Magazine 1940. According to Shirley Jones Gallery, he served in the Army during World War II. The Detroit News said, "He joined the faculty at Michigan State University in 1946…" A June 30, 1946 news release from Art Institute of Chicago announced "Paintings by Janet and Murray Jones, and Maurice Ritman, exhibition". The date of Jones's marriage is not known. Their son Michael was born in 1946, according to Shirley Jones Gallery. Time Magazine published his letter in its January 13, 1947 issue.
Shirley Jones Gallery said, "From 1959-61, Jones lived and worked in Kyoto Japan under the sponsorship of a Fullbright Research Fellowship….at Michigan State University...he taught until 1962 at which time he accepted a professorship at Ohio State University…." Jones passed away in 1964. In a 1985 issue of Dialogue, from the Akron Art Institute in Ohio, Dale Newkirk said Jones died of multiple sclerosis. Murray Jones 1915-1964: A Memorial Exhibition was published in 1965.
* Ralph Fuller Jr. (1904–1972; no relation to Ralph Fuller of Oaky Doaks fame) may have been one of the artists who worked on Caro-Graphics; a cartoon in yesterday's post was credited to "Fuller and Johnston". Fuller, a Georgia native, grew up in Durham. Johnston might be Samuel Nash Johnston (1906–1937), a North Carolina native, who died of acute nephritis. Another possibility is "Nash Johnston" is a pseudonym; Nash and Johnston are counties in North Carolina.