Ahmed Samuel Milai was born in Washington, DC on March 23, 1908, according to a family tree at Ancestry.com. In the 1910 U.S. Federal Census, he was the youngest of three children born to Mohamed and Sarah; his name was recorded as Elisha S.H. Milai. The family lived in Locust Dale, Virginia. The census said his father, a traveling artist, was born in "Spain Hindi"; he immigrated in 1898. Milai's paternal grandparents were born in "India Hindi." His mother and maternal grandparents were born in Virginia; in the 1880 census under the column, Color of Race, her family was classified as mulatto. In 1910 the Milai family was described as mulatto.
Milai's father painted the murals for the Central Baptist Church in Charleston, South Carolina. A report documented the history of the church with photographs of the church exterior and interior, and the murals.
In 1920 the family lived in Pittsburgh, Pennsylvania at 174 Auburn. Milai's name was recorded as Samuel, and his father's name was Amohamed, who was born in India. According to the family tree, Milai's father passed away on March 1, 1924 in Detroit, Michigan.
Milia has not been found in the 1930 census. Shortly after the census, Milai married Bernice Rucker. The family tree said their son, Ahmed Samuel Jr., was born in Pittsburgh on August 23, 1931. According to the Delaware Death Records at Ancestry.com, Milai's mother passed away on April 15, 1932 in New Castle.
Milai found work as a cartoonist at the Pittsburgh Courier, which published his strips Bucky (1937), Your History (1940), Don Powers (1950) and others. 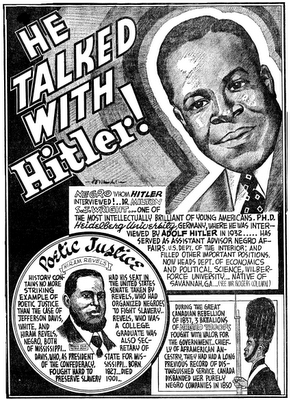 Your History
Milai passed away on April 30, 1970 in Pittsburgh. A photo of Milai was published in African Americans in Pittsburgh (2006). The Billy Ireland Cartoon Library & Museum, at Ohio State University, mounted the exhibition, Sam Milai of the Pittsburgh Courier in 2008.