Martin Michael Branner was born in New York, New York on December 28, 1888, according to his World War I and II draft cards at Ancestry.com. In the 1900 U.S. Federal Census, the Branner household lived in Manhattan, New York City at 242 East 110 Street. Bernard and Minnie, Romanian emigrants, had seven children. Branner's twin brother was Isidor and they were the second oldest of the siblings.
In the 1910 census, Branner lived with his in-laws, the Fabbrinis, in Manhattan at 120 West 103 Street. His occupation was actor in theater; his wife, Edith, was an actress. They had been married three years. He signed his World War I draft card on June 5, 1917. His occupation was vaudeville actor. His description was short height, slender build, with blue eyes and brown hair.
The couple were with the same household at the same address in the 1920 census. After short runs on Louie the Lawyer and a few other strips, his hit comic strip Winnie Winkle the Breadwinner debuted September 20, 1920, according to the Syracuse University's Special Collections Research Center's collection of Martin Branner cartoons. 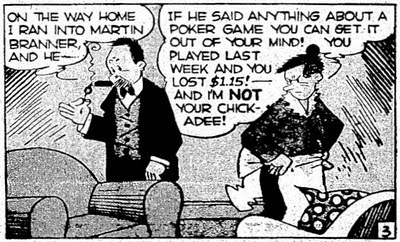 Coach Owes Job to Winnie Winkle
...Mr. Berrill, 35, has been a comic-strip artist since his teens….[He] is Brooklyn-born and was graduated from Brooklyn Tech in 1941. He refused an art scholarship because his father thought added study would ruin his style as a cartoonist.
As a result, Mr. Berrill went to work as a copyboy on the New York News. His salary: 18 dollars a week.
But opportunity knocked in the form of Martin Branner, the creator of Winnie Winkle, another World-Herald comic feature.
Mr. Branner asked Mr. Berrill to become his assistant and he has worked with him since....


The New York Times published news of his wife's passing on January 3, 1966. Branner passed away May 19, 1970, at the Nutmeg Pavilion Convalescent Hospital in New London, Connecticut. The Times published his obituary two days later.