Frank Rutledge Leet was born in Canfield, Ohio on October 16, 1881, according to his World War I and II draft cards. In the 1900 U.S. Federal Census, he was the oldest of four children born to Eugene and Ida. They lived in Girard Village, Liberty Township, Ohio on State Street. His father was an agent of the Erie railroad. The Cleveland Plain Dealer, December 8, 1949, said, "He was a graduate of the Cleveland Institute of Art." The Billy Ireland Cartoon Library & Museum's Cartoon Image Database has scans of his panels, A Rhyme of Doting Parents and A Rhyme of a Doting Mamma. Chronicling America has some of his sports cartoons and other work here. 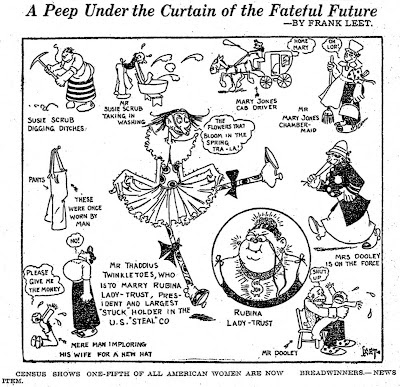 The Tacoma TImes (Washington) 9/10/1910
The 1910 census recorded Leet in Lakewood, Rockport Township, Ohio at 11825 Detroit Avenue. He had been married four years and was a newspaper artist. He and Nellie had two daughters, Jean and Dorothy. Some of his work for Newspaper Enterprise Association can be viewed at Yesterday's Papers. The Mahoning Dispatch (Ohio), July 18, 1913, reported his latest endeavors.
Warren Chronicle: Mr. and Mrs. Frank Leet, of Chicago, Ill., are guests of the former's parents, Mr. and Mrs. S.E. Leet. For a number of years Mr. Leet has been identified with the N.E.A. syndicate as a cartoonist. Mr. Leet has decided to go into business for himself, and has already contracted with a St. Louis, Mo., syndicate to handle his cartoons and strip work, as well as a Sunday supplement sheet. Mr. Leet began his artistic career in the schools at Girard. His first printed cartoon appeared in the Warren Daily Chronicle about 15 years ago. 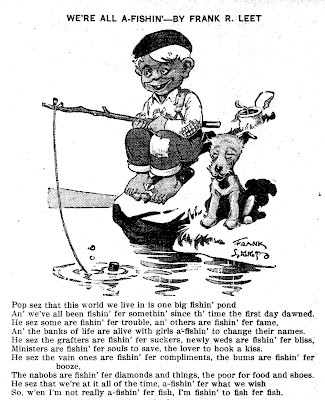 The Day Book (Chicago, Illinois) 4/29/1913
Fourteen months later, the Dispatch, October 16, 1914, said: "Frank Leet, son of Mr. and Mrs. S.E. Leet of Warren, formerly of Canfield, is now a cartoonist on Puck. He resides in Warren." His strip, Al Acres, is discussed at the blog, Salmagundi, which says the strip started in 1916 and ended in 1942. On September 12, 1918, he signed his World War I draft card. He lived at 1664 Waterbury Road in Lakewood, and was a self-employed advertising artist. His description was medium height, slender build with gray eyes and black hair.
In the 1920 census, he was at the same address and occupation. His son, Robert, was five months old. His youngest brother, Warren, lived next door at 1668. The Leet family was recorded in the History of Youngstown and the Mahoning Valley, Ohio, Volume 2 (1921). In 1928, his first two books, The Clowns' Acrobatic Alphabet and When Santa Was Late were published by the Goldsmith Publishing Company. According to Lambiek, "Leet became ill with a form of encephalitis that left him with a palsy and unable to draw, thus his son took over the drawing of his syndicated comic strip 'Al Acres' when he was just 12 years old [1931]. Frank Leet would do the writing and develop the concept and his son would do the drawing." Information substantiating Leet's illness has not been found at this time.
According to the 1930 census, he remained in Lakewood but at a different address, 1533 Chesterland Avenue. His occupation was independent commercial artist. In this decade, he wrote a number of books, illustrated by Fern Bisel Peat, that were published by the Saalfield Publishing Company: The Animal Caravan (1930), The Hobby Horse That Learned to Gallop (1930); Hop, Skip and Jump: Three Little Kittens (1936); The Little Brown Dog (1930); Polka-Dot Cat (1930); and Purr and Miew, Kitten Stories (1931). To the Circus the Children Go (1931) was illustrated by Gertrude Alice Kay. When Santa Was Late, illustrated by Buford Austin Winfrey, was published in 1990.
He was not working when he signed his World War II draft card on April 27, 1942. He and Nell remained at the same address. Leet passed away December 7, 1949. His death was reported, the following day, in the Plain Dealer.

Frank R. Leet, commercial artist, cartoonist and author of children's books, will be buried in Lakewood Park Cemetery following services at 3 p.m. tomorrow in the Saxton funeral home, 13215 Detroit Avenue, Lakewood.
He died yesterday in his home, 1533 Chesterland Avenue, Lakewood, at the age of 68. He was a native of Canfield, O., and had been a resident of Greater Cleveland since early in the century. He was a graduate of the Cleveland Institute of Art. For many years he had a studio in the Caxton Building.
Surviving him are his wife, Mrs. Nell Wallis Leet, two daughters, Mrs. Jean Barger and Mrs. Dorothy Hanna; a son, Robert, and five grandchildren.

Comments:
Thank you for providing this information on my grandfather,
Frank Leet. My father, Robert, did indeed draw the strips after my grandfather contracted his illness, which left him bedridden for more than 20 years. He passed on when my oldest sister was an infant, thus my sisters and I never had the pleasure of knowing him. The Internet has provided us with a treasure trove of his work to add to some of his original work that we possess. On behalf of our family, I am expressing our appreciation for your research and for sharing some samples of his prolific work. Thomas R. Leet

Leet's signature was all over the sport pages circa 1910. The Chronicling America link and the Tacoma Times strip show in the blog barely touch the surface.

Search through that 1910 Tacoma Times day by day from April through August and nearly every day you will see a one-panel baseball drawing by Leet in the sports page. These appeared in many papers (and Leet wasn't the only one supplying them, "Meek" also drew many). They usually accompanied the article about the local team's latest game, along with a caption that related the comic to the game. I assume that they were not drawn in response to the game though, and that they were essentially stock artwork that the cartoonist had supplied ahead of time.