George Daniel Clardy was born in Dubuque, Iowa on January 28, 1886, according to Iowa, Births and Christenings Index, 1857-1947 at Ancestry.com. In the Iowa State Census, 1895, he was the oldest of two sons born to Joseph and Lucy. The lived in Dubuque.


In the 1900 U.S. Federal Census, he lived in Julien Township, in Dubuque, at 1280 Rhomberg Avenue. His father was day laborer. He has not been found in the 1910 census. The Rockford Register-Republic (Illinois), August 19, 1935, published a Believe It Or Not panel, "George D. Clardy wrote a letter a mile long!" 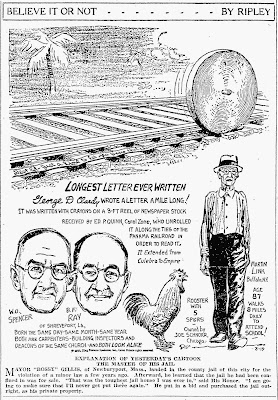 An explanation appeared the following day. 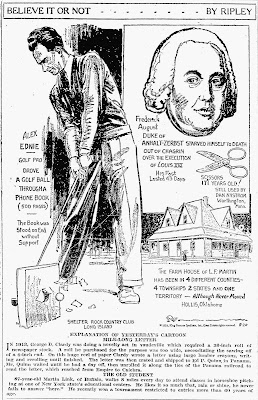 In 1913, George D. Clardy was doing a novelty act in vaudeville which required a 36-inch roll of newspaper stock. A roll he purchased for the purpose was too wide, necessitating the sawing off of a 4-inch end. On this huge reel of paper Clardy wrote a letter using large lumber crayons, writing and rerolling until finished. The letter was then crated and shipped to Ed P. Quinn in Panama. Mr. Quinn waited until he had a day off, then unrolled it along the ties of the Panama railroad to read the letter, which reached from Empire to Culebra.

According to a passenger ship list, he returned, from Cristobal, Panama, to New York City on March 1, 1914. He may have been the cartoonist of Old Sport Owl. The Catalogue of Copyright Entries, Part 4, Works of Art, Etc., 1915, New Series, Volume 10, Number 2 has an entry for him:

Clardy found work in the animation field. An issue of Movie Maker, Volume 6, Issues 7-12, 1972, said: "…By 1917, [Pat] Sullivan was putting out a new 500-ft cartoon a fortnight, and had enlarged his staff with such animators as George Clardy, Will Anderson, Joseph Harwitz, Bill Cause and Otto Messmer…." Clardy was credited in the Catalogue of Copyright Entries, Part 1, Group 2, Pamphlets, etc., 1917 New Series, Volume 14, Number 1:

An issue of Photographica, Volumes 9-12, 1977, noted Clardy's inventiveness in " 'Clardy Camera; Autocinephot 35— First with a Motor Drive'; In 1917, George Clardy of New York City applied for a patent on a 35mm camera which was never produced." On September 12, 1918, he signed his World War I draft card. He lived in Passaic, New Jersey at 223 Gregory Avenue. His occupation was illustrator for "D.L.W. R.R. Passaic". His wife, Charlotte, was his nearest relative. HIs description was short height, medium build with blue eyes and brown hair. Photo-Era, December 1919, reported this item: "A new type of camera, patent, number 1318966, was issued to George D. Clardy, of New York, NY, who assigned a one-third interest to Norman T. Whitaker of Washington, D.C., and a one-tenth interest to R.E.B. Wakefield, of Washington, D.C."

The 1920 census recorded Clardy and his family in Passaic, New Jersey at 223 Gregory Avenue. He was a newspaper illustrator. The Catalog of Copyright Entries, Part 4, Works of Art…, 1921 New Series, Volumes 16, Number 4 had this entry:

Several daring rescues were made before the building was cleared of all its tenants. The fire spread so rapidly that many tenants hardly had time to flee to the fire-escapes. George Clardy and his wife, when aroused by the shouts of warning and the clatter of the fire apparatus, gathered up their five children and led them to fire-escapes in the rear of the building. Mr. Clardy held in his arms his youngest son, Joseph Jefferson two weeks old.

The Clardy family descended the fire-escape and all went well until Mr. Clardy with the infant tried to let himself down from the second floor to the ground by means of the detachable ladder. He was climbing down the ladder when he became weak and panic-stricken. He shouted for help.

Mr. Clardy's cries were heard among others by Charles McLaughlin, a neighbor on the same floor, who had led his mother and step-father safely down the fire-escape. Mr. Laughlin was standing under the fire-escape when he heard Mr. Clardy shout:

An instant later the baby came hurtling down. Mr. McLaughlin and another man, who was not identified, jumped forward just in time to catch the infant. Both had hold of the little one when Mr. Clardy either jumped or fell from the ladder. He landed on top of Mr. McLaughlin and the other rescuer of the baby. They broke his fall. Neither Mr. Clardy nor the baby was injured.

In the 1930s Clardy turned to writing lyrics. The Catalog of Copyright Entries, Part 3, Musical Compositions, 1939 New Series, Volume 34, Numbers 9 and 11 have entires for him and his collaborator, Jimmy Scribner; music by Willie "The Lion" Smith. The website, I Went Down to St. James Infirmary, has additional details on Clardy.

He signed his World War II draft card on April 25, 1942. He lived in New York City at 777 10th Avenue, and worked at the Beem Company in Yorktown Heights, New York.