Sadayuki Thomas Okamoto was born in Kent, Washington on March 15, 1916. His Japanese name is from the record, Japanese Americans Relocated During World War II. The birthplace was on a 1918 passport application, although the birth year was recorded as 1915. His birthdate is from Washington Births, 1907-1919. According to the application, he lived in Hiroshima-ken, Japan since September 28, 1916. He, his mother, older brother and sister arrived in Seattle, Washington on March 16, 1918, as recorded on a passenger ship list. All records are from Ancestry.com.


Okamoto has not been found in the 1920 U.S. Federal Census. His name was recorded on a passenger ship list. From Yokohama, Japan, he arrived in Seattle on November 14, 1927. He has not been found in the 1930 census, and the date of his move to Los Angeles, California is not known. Editor & Publisher, December 24, 1955, said, "...After one year at Sacramento Junior College, he attended Chouinard Art Institute in Los Angeles, following with a job as staff artist in the Walt Disney studio." Asian American Art, 1850-1970 (2008) said: "The growing industry of Hollywood provided employment to many Japanese American artists—behind the camera or at the animation table….Chris Ishii, Tom Okamoto, Tyrus Wong, Milton Quon, Wah Ming Chang, James Tanaka, Robert Kuwahara, and Gyo Fujikawa all worked for Disney at some point in the pre-World War II period…"

In late May 1941, a strike was called against Disney. Drawing the Line: The Untold Story of the Animation Unions from Bosko to Bart Simpson (2006), said, "A local newspaper article of the time noted that all four of the Nisei artists went out on strike: Chris Ishii, Tom Okamoto, Masao Kawaguchi, and James Tanaka." Apparently, the quartet found work elsewhere when the Disney strike ended. 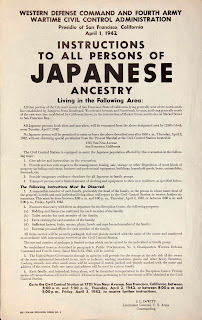 On December 7, 1941, the bombing of Pearl Harbor had a devastating effect on the Japanese Americans on the West Coast. Tens of thousands of them were relocated in camps. Okamoto found himself at the Santa Anita Assembly Center in Santa Anita, California in April 1942. The assembly center was a racetrack. Here, he was reunited with Chris Ishii and, no doubt, met Bob Kuwahara. A newsletter was created, the Santa Anita Pacemaker. The July 16, 1942 issue had an article about Okamoto:

Tom Okamoto, one of the outstanding artists in the Center, who teaches art classes daily from 1 to 5 p.m. in the Grandstand, said, "There are two kinds of art. One is to please other people. The other is to express the way you really feel. I think the latter is much deeper and satisfying."

As an example of this, after Okamoto was evacuated to Santa Anita from the westside in Los Angeles, he painted a picture called "Last Look."

In the background of the picture stands the tower of the Japanese M.E. church at 35th and Normandie. The picture has an air of desolateness and loneliness about it.

"I wanted to show the loneliness of the scene. Just before we piled into the buses, I walked around and took one good 'last look,' at this place. In spite of all the traffic and people milling about there was a desolation of spirit. I wanted to express it on canvas."

Okamoto believes that in teaching the students the fundamentals of art, the students should be encouraged to choose objects that are the most familiar to them or closest to them—something they know and understand.

"A teacher," said Okamoto, "should find out the background of his students in order to bring out their hidden talents and capabilities."

According to Editor & Publisher, "…In 1943, he [Okamoto] served in the Army as a master sergeant in military intelligence…" He was stationed at the Military Intelligence Service Language School, located at Fort Snelling in St. Paul, Minnesota. While he was there, Okamoto designed an emblem for the school. Editor & Publisher also said: "…when he was discharged in 1947, he went to Art Center School in Los Angeles until 1951."


This snippet was found in Scene, The International East-West Magazine, Volume 3, 1951: "Tom Okamoto, California cartoonist, gets fresh ideas for his syndicated cartoon strip by watching his two sons, Deems and Eric, in the living room of the Okamotos' new home in El Monte, Calif. Mrs. Okamoto looks on." Named after his oldest son, Deems began sometime in 1951. In late 1955, his strip, Little Brave, was named the top winner in United Feature Syndicate's $10,000 Talent Comics Contest. The Sunday Herald (Connecticut), February 12, 1956, announced the winners, too. He used the pseudonym Tom Mako on his strip.

Okamoto passed away November 20, 1978, in Contra Costa, California, according to the California Death Index at Ancestry.com.

Comments:
I have a couple of drawings by Tom Okamoto. One is of my dad (Joe Ishikawa) sleeping, and one is a self-portrait of Tom winking mischievously. I imagine he left both for my dad to find upon waking. My dad never told me the circumstances of the drawings, he just mentioned that they were made by a former Disney artist. He later gave me a photo of Tom and Tom's wife and told me that was the friend who had made the two drawings.

After reading Tom Okamoto's biographical information here, I wonder if the pictures might have been drawn at Santa Anita or Amache. My dad was from L.A. so I always assumed he knew Tom in L.A., but my dad also went to Santa Anita and Amache -- maybe he met Tom there. His apparent age in the sleeping picture (young adult) would match with his time at either. Yet another question I wish I had asked before Dad died..