Carl Theodore Pfeufer was born in Mexico City, Mexico on September 29, 1910, according to a family tree at Ancestry.com. The World Encyclopedia of Comics (1983) said the family moved, in 1913, from Mexico to New York City. Art Exchange has information on his art training.

Carl T. Pfeufer…began his fine art training in New York City where he attended a two-year vocational school for commercial art. That school helped prepare him for admission to Cooper Union at the age of 16 where he continued to study art. While he was there he won the Hors Concour award for his life drawings. Upon graduation from Cooper Union, he attended The National Academy of Design where he received the Prix-da-Roma, a scholarship he was forced to turn down due to family responsibilities. He continued studying at the Grand Central Art School and Art Student's League in New York City. Pfeufer also studied privately with William Starkweather, protege of Joaquin Sorolla, a Valencian painter.

In the 1920 U.S. Federal Census, Pfeufer was the fourth of six sons born to Anna, a New Yorker; the name and fate of her husband, a Texan, is not known. The family lived in Manhattan, New York City at 211 West 117th Street. Pfeufer's first name was recorded as "Charles"; I'm guessing the enumerator misheard the name Carl. World Encyclopedia said, "Towards the end of the 1920s Carl Pfeufer started work with the McFadden publications doing layouts, spot illustrations, and editorial cartoons."

In 1930 the family of eight lived in Manhattan at 215 Audubon Avenue. Pfeufer was an artist in the publication industry. His debut in comics was in October 1935, in the Brooklyn Daily Eagle (New York) Sunday comics section. The features were Don Dixon and the Hidden Empire, a science-fiction strip, and Tad of the Tanbark, initially a circus story that evolved into a jungle story. (In Ron Goulart's The Funnies: 100 Years of American Comic Strips, he explained, "Tanbark is the material they spread in circus arenas…") Tad was the topper strip which shared a children's activity panel, Scissor Sketches. All three were written by Bob Moore. World Encyclopedia said their debut was on October 6. I looked at the eight-page comics section, which are clearly dated, for the sixth and thirteenth, and the comics and panel did not appear until the 20th [I agree with Alex's start date based on my own reasearch -- Allan]. The book credits Pfeufer and Moore as co-creators. 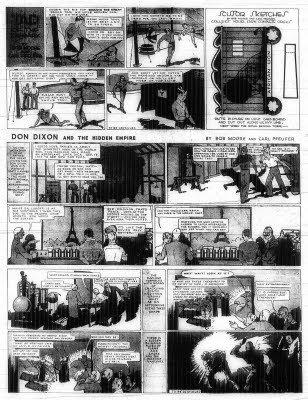 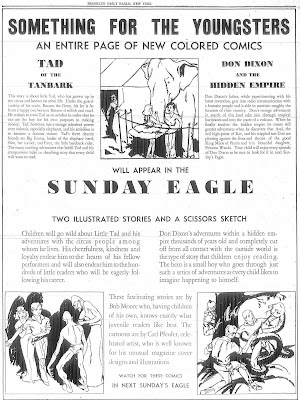 
It appears Pfeufer produced the material and it was shopped around. I have not found any information on Lisiecki Associates. Moore's name was not mentioned; maybe he was brought in later, when the Daily Eagle picked it up. In December 1936 Moore and Pfeufer were teamed up on Gordon Fife. The birth of comic books provided another outlet for Pfeufer; his credits can be viewed at the Grand Comics Database. His time in comic books and strips spanned about three decades. Wikipedia covered his comics career. (Surprisingly, what is missing from the list of references is Maurice Horn's World Encyclopedia of Comics.) Who's Who of American Comic Books, 1928–1999 has an excellent overview of his career.

The 1940 census recorded him and his family in Dumont, New Jersey at 88 Fleetwood Road. He was married to Marie, had three sons, ages three to eight months, and was a commercial artist. The census said he lived in the Bronx in 1935. The family tree said he married Marie E. Sherwood; the 1940 census suggests they married around 1935.

Two of his strips from the fifties were The Bantam Prince and The Chisholm Kid.

Art Exchange said, "In his later years, Pfeufer combined both travel and painting, especially in the Mediterranean area." He passed away on May 5, 1980, in Center Point, Texas (Social Security Death Index).

Comments:
Carl Pfeufer had more then 3 children. He had 8 children 7 boy's and 1 girl.