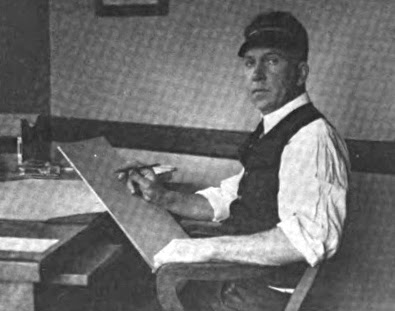 Charles Arthur Sughroe was born in Pleasant Valley Township, Illinois on September 2, 1886, according to his World War I draft card and the Rockford Morning Star (Illinois), September 13, 1958. The original spelling of his surname was "Sughroue" as recorded on his first world war draft card, on the 1900 through 1930 U.S. Federal Censuses, and an article on his mother's death in the Rockford Register Gazette, August 13, 1929.


In the 1900 census, he was the first of two sons born to John and Hannah. They lived in Stockton, Illinois. His father was a publisher. Ten years later they remained in Stockton and resided on Hudson street. Sughroe was an artist. Caralee Aschenbrenner, Prairie Advocate, profiled Sughroe. With two newspapers in Stockton, she described what happened and how Sughroe got into publishing.

Competition arrived, however, in 1898 when another newspaper was added to the roster of Stockton businesses, the “News.” The rivalry continued until 1919 when shrewd thinking determined that two newspapers in a town the size of Stockton was one too many. [John] Sughroe bought the "News" and combined the names into “Stockton Herald-News” in 1912. Sughroe’s son, Charles, contributed to the newspaper columns his first cartoon. He loved to draw and had decided to become an artist at that early age. Of course, in the newspaper business, family is often staff, so Charles helped at the paper in many ways, “groomed,” as they say to one day take charge!

...His talent for drawing and painting culminated in going to Chicago to the Art Institute to school hoping to pursue an art career.

He had become acquainted with two other local artists-illustrators, Nate Collier, Pearl City and Howard Smith of Pleasant Valley, his dad’s home when young. They had all three graduated from the Art Institute so felt a kinship for that reason, too.

On June 5, 1917, Sughroe signed his World War I draft card. His occupation was journalist. His description was tall height, medium build with blue eyes and dark brown hair. Prairie Advocate said: "…he was inducted into the Army at Camp Grand, Rockford in February, 1918…[and] was sent to France in late 1918."; the site has a photo of Sughroe in uniform.

The start date for Mickie the Printer's Devil as a panel is not yet known. The earliest one found, at this time, was published in the Casa Grande Bulletin in January 1918. The panel was alternately known as Mickie Says, while the original name was re-used for the strip, which apparently began in 1920; samples of the strip are at Barnacle Press and Chronicling America.

The 1920 census recorded Sughroe and his parents in Stockton on Benton Avenue. He was a newspaper cartoonist. Charles F. Wadsworth in American Printer & Lithographer, July 5, 1922, profiled him (see photo) and said:

We shall tell about the man who made the printer's devil a national figure.

Out at Stockton, Illinois several years ago a father and son engaged in enlightening the populace through the medium of a weekly newspaper, and meeting all the difficulties and tribulations of those whose efforts lie in that direction, and realizing that the country editor was usually deprived of a square deal in his relations with those upon whom he depends for support, conceived the idea of talking to the readers of the Stockton Herald-News through the medium of the printer's devil of the office, who was dubbed Mickie. The father was John Sughroe, who yet is the publisher and editor of the Herald-News and the son was Charles Sughroe, the cartoonist whose name is familiar to the readers of country newspapers in almost every county of the United States.

Mr. Sughroe's pictures of Mickie and his doings do not give the least idea of the artist himself. The little cuss usually is shown in the most violent action of mind or body while Charley Sughroe is more than six feet tall, serious, soft spoken and precise in his diction. It would seem that Mickie is so much of him that his language would be that of the cartoons.

Mr. Sughroe was reared in the newspaper business and his earliest recollection is of an assignment to a dishpan containing the entire remains of a pied newspaper page for after school distribution. He was the original Mickie and washed forms, swept out, bathed the rollers and was initiated into the mysteries of the type louse fraternity at an early age.

He was in sole charge of the newspaper for four years, and besides calming irate subscribers and doing the chores the average country newspaper man, is accustomed to, he made chalk plate illustrations He spent four years at the Chicago Art Institute and gained much experience in the free lance commercial game for a like time afterward. He exhibited paintings in the galleries of the Art Institute.

But Mickie led to the fame and considerable fortune for Mr. Sughroe The little cuss fitted in so well with the needs of the country publisher that he was adopted at once in thousands of newspaper offices as one of the most important members of the force. For by this means the country newspaper game is boosted in every way possible the subscribers are bawled out something awful but in a way to make them laugh and take the criticism in a friendly way. Every Mickie cartoon is founded on some actual happening so it is not overdrawn.

Mickie first was offered in little single column cartoons and made an instant hit. Then his scope was enlarged to the strip form, six columns wide, and the success of the strips has been even greater than that of the single comics. When Mr. Sughroe went to Chicago to show his first Mickie drawings to Wright A Patterson, editor in chief of the Western Newspaper Union, Mr. Patterson, himself an old country newspaper man instantly recognized the appeal of Mickie's sayings and doings and placed Mr. Sughroe on the WNU staff then and there.

Mr. Sughroe, however, does his work at Stockton where he can absorb and utilize the small town ideas which are necessary to present Mickie at his best, and where the objects of Mickie's wit, satire and wisdom abound. The small town also provides much material for Mr. Sughroe's other series, People of Our Town and Town Pests, which are so true to small town life that they have attained a wide popularity also.

However, Mr. Sughroe recently made a trip East which included Washington, Philadelphia, Pittsburg, Atlantic City, New York and other cities where Mickie had never been and the strips soon to be released will detail impressions and adventures such as only Mickie would have in those cities.

Mr. Sughroe holds no long hair Bohemian ideas. He believes that an artist should keep in touch with the work-a-day world and be of service through his productions; that the newspaper business is one of the livest, affording ample opportunity for the man with brains and a willingness to work. He is interested in art exhibitions, New York, linotypes, letters from editors using Mickie cartoons, the American Legion, automobiles, any old kind of a dog, the other fellow's cartoons. His favorite occupation, beginning November 1921, is staying at home, as Mickie acquired a charming young mamma, formerly Miss Marie Donahue, on the fifth of that month. She has agreed to let Mickie wear his hair in his regulation uncombed style and to retain his favorite exclamation, "Gosh!"

"About ten years ago a young fellow named Sughroe came to my office to sell an idea for a one-column cartoon which he called 'Mickey Says.' Mickie was a freckle-faced printer's devil who wise-cracked about any subject under the sun, but always with a grin."

"The country was in the midst of war just then. I was thinking war, and not much else. Therefore, instead of looking for reasons why Sughroe's idea might be good, I looked hard for a way to turn him down nicely.

"'You've got a good idea,' I admitted, 'but this isn't a good time to spring it. People want war stuff. We'd just spoil it for you if we tried to put it out now. Come back later, when peace is declared.'

"But Sughroe was bound and determined we should take his idea right away. Finally, I said:
" 'There's only one possible way we could think of using it. That's for you to take part of the gamble: Get your pay as a percentage of the net receipts— if there are any.'

"He literally jumped at the chance.

"Well, Mickie went like wildfire. Inside two weeks we were sending young Sughroe—he wasn't yet of age—a check for more than five hundred dollars as his share to date. The feature is as popular to-day as ever; more popular, in fact, because almost everybody knows Mickie. That lad can tell subscribers to pay their bills, and he gets a smile—and a check—when a formal statement of account would go into the wastebasket."

He was recorded, in the 1930 census, in Stockton at 308 North Simmons Street, and lived next door to his father, who was at 312. His occupation was newspaper work. His father passed away in 1935 according to records at the Holy Cross Cemetery.


He was at the same address in the 1940 census, and worked as a local newspaper publisher. On April 27, 1942, he signed his World War II draft card. His description was six feet two inches, 220 pounds, with blue eyes and gray hair.

Sughroe passed away September 12, 1958 at the St. Francis Hospital in Freeport, Illinois. His death was reported in the Rockford Morning Star the following day. He was buried at the family plot in Holy Cross Cemetery in Stockton Township.