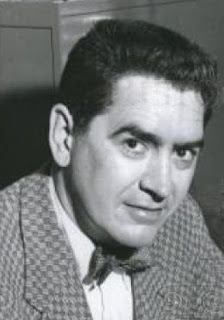 Richard Eugene “Rick” Fletcher was born in Burlington, Iowa on June 1, 1916. His birthplace is from his National Cartoonist Society (NCS) profile, and his birthdate is from the Social Security Death Index.

In the 1920 U.S. Federal Census, he was the youngest of two sons born to Russell and Maude. They lived in Burlington, Iowa at 604 South Gunnison Street. His father was a railroad foreman. The 1925 Iowa State Census recorded him in Burlington at 418 South Leebrick Street. He was the second of three children.

The 1930 census recorded Fletcher in Burlington at 909 Garfield Avenue, where he was the second of four children. His father remained with the railroad. In the book, Dick Tracy and American Culture: Morality and Mythology, Text and Context (2003), Garyn G. Roberts wrote, “Fletcher started his career at age 18 as the one-man art department of Tri-City Star in Davenport, Iowa. He had no formal art training but learned his craft by studying art books in the public library of his native Burlington, Iowa.” The Official Nebraska Government Website has samples of Fletcher’s artwork used on flour sack puppets, “while he was an artist for the Rudy Moritz Advertising Co. in Davenport, Iowa.”

Fletcher has not been found in the 1940 census. He enlisted September 29, 1942, according to U.S. Veterans Gravesites at Ancestry.com. On his NCS profile it said, “During WW II served in the ETO in 5 campaigns with the 83d Inf[antry] Div[ision], a Bronze Star and a Captain's rating. In 1946 joined art staff of the Chicago Tribune. Studied comic strip technique under the late Carey Orr, Pulitzer Prize winner.”

Roberts said, “From 1953 to 1965, Fletcher drew the well-known historical strip ‘The Old Glory Story’ for the Tribune Syndicate….in collaboration with Athena Robbins…” According to Ron Goulart, in The Funnies: 100 Years of American Comic Strips (1995), the Tribune had the distinction of having two cartoonists named Richard Fletcher. Today’s subject is Rick Fletcher. Dick Fletcher was the artist of Jed Cooper. The Park Forest Star (Illinois), February 3, 1953, profiled Rick Fletcher but referred to him as Dick.

Along Marquette street people are pointing proudly at No. 114 as the home of Dick Fletcher, one of the creators of a feature strip which made its debut Saturday in the Chicago Tribune.

But they aren’t nearly so excited as Dick and Beverly Fletcher are themselves over the fact that the strip which has been in the making for two years has finally made its debut and has already been syndicated and placed in newspapers in Philadelphia, Boston, Seattle, Baltimore, Fort Worth, Kansas City and Brooklyn.

The strip is in color and is called “The Old Glory Story.” It is “different” in that it will give the children—and the adults—who follow it real history about the flag of this country. In Saturday’s first installment readers saw the landing of Columbus in America and the flags which he brought to these shores.

Here Two Years
Historical material for the weekly strips is gathered by Athena Robbins, a copywriter in the advertising department where Dick is an illustrator. Two years ago she came to Dick with the idea and asked him to do the art work.

Dick is 37 and, with his wife and two-year-old Kathy, has lived in Park Forest almost two years. They lived in a rental unit at 27 McCarthy road before moving to their present three-bedroom home on Marquette street.

One of those bedrooms has been converted into a studio for Dick. It is here that he works on the strip. A gate at the door keeps Kathy in hearing distance but discourages any direct “help” at the drawing board.

On Saturday night Dick and Bev went to a gathering at a friend's house where they met another couple whose son was a Cub Scout. The youngster had read the first of Dick's strips on the flag that morning and liked it so much that he had already started a scrapbook.

“That really thrilled me,” said the happy Mr. Fletcher.

The NCS profile said, “In 1963 began his 15 year association with the Dick Tracy comic strip, as Chester Gould's assistant. On Dec 26, 1977 Fletcher took over as sole artist on the strip when Chet retired. Max Collins of Muscatine Iowa does the writing….”

Roberts wrote, “…On Friday, March 11, 1983, Rick Fletcher produced his final work for Dick Tracy. The next day, he went into Memorial Hospital for McHenry County near his home in Woodstock, Illinois. On Wednesday, March 16, 1983, the greatest comics artist of guns, hardware and machinery in the history of the medium died….” The Tribune reported his death the following day and made a correction on April 3.

Comments:
Thank you for posting this about my grandfather! What a nice passage about his debut as an artist! :)

1963 seems wrong, since 'Rick' was one of the names mentioned as the group of people working on Tracys filler strip for the Chic Trib, The Gravies. Indeed, on his bio page, 1961/2 is mentioned as the true date.