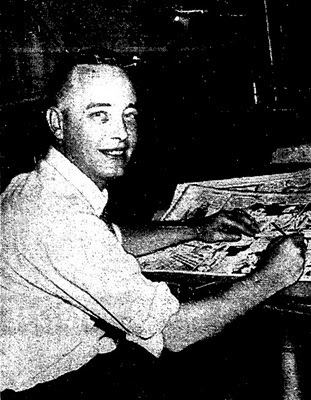 John Arthur “Jack” Berrill was born in Brooklyn, New York on September 22, 1923, according to the Social Security Death Index. The 1925 New York State Census recorded him in Brooklyn at 116 East 28 Street. He was the youngest of three children born to Thomas and Lillian. His father was a salesman.

In the 1930 U.S. Federal Census, he was the third of five children. They lived in Brooklyn at 814 East 39 Street. His father was a real estate salesman.

…Gil Thorp’s creator is Brooklyn-born and was graduated from Brooklyn Tech in 1941. He refused an art scholarship because his father thought added study would ruin his style as a cartoonist.

As a result, Mr. Berrill went to work as a copyboy on the New York News. His salary: 18 dollars a week.

But opportunity knocked in the form of Martin Branner, the creator of Winnie Winkle, another World-Herald comic feature.

Mr. Branner asked Mr. Berrill to become his assistant and he has worked with him since…. 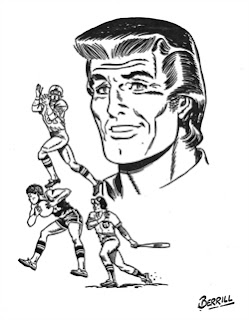 His home was the same location in the 1940 census, and his father was an industrial arts teacher. During World War II, he enlisted in the Army on March 29, 1943, according to Ancestry.com. The Hartford Courant obituary, March 16, 1996, said, ”…he served in the Eighth Army Air Force, 34th Bomber Squadron, stationed in Mendelsham, England.” The World-Herald profile said:

…Mr. Berrill, 35, has been a comic-strip artist since his teens. He has placed Coach Thorp in Milford High, a school similar to the one in New Milford, Conn., where Mr. Berrill lives….

…In Gil Thorp, Mr. Berrill seeks to portray young people as they really are.

“For the most part,” he said, “kids are looking for advice and guidance and they're not getting it. I try to reflect high school life as realistically as possible.”

The Seattle Times obituary, March 16, 1996, said, “The strip was named after two of Mr. Berrill’s heroes—Jim Thorpe and Gil Hodges.” The Hartford Courant said, “…Berrill was also president of his own company, Connecticut Cartoonists Associates.…” He passed away March 14, 1996, in Brookfield, Connecticut, according to the Social Security Death Index.

Comments:
Jack was my wife's uncle, her mom Jane Berrill. Amazing how popular his strip was. I remember my parents telling me how the Detroit papers faced an uproar when they even thought of dropping Gil Thorp in favor of something new- and the crowd he attracted at a book signing at a Detroit area mall.

Berrill was a great cartoonist and storyteller.
Wish somebody would collect Gil Thorpe in book form.

To Alan Geez: just saw you post from last year. Many if not most of the Gil Thorp stories were compiled into a number of books by Matt Shaughnessy in the '80s and '90s. They sometimes become available on ebay and other sites.