Charles Biro was born in New York City, May 12, 1911, according to the Social Security Death Index and census records. He was not in the 1920 U.S. Federal Census because he was in Europe. A February 1921, Philadelphia passenger list recorded the return of Biro and his parents from Le Havre, France to New York City. The list said his parents, Anton and Josephine, were of the Hebrew race, Czechoslovakian nationals who spoke German. Their last permanent residence was Wien, Austria, and they were in New York City from 1909 to 1914. The Monthly Supplement 1951, to Who’s Who in America, said Biro attended the New School in 1918.

The 1925 New York State Census said the family of five lived in Queens County, New York at 148th Street and Grand Central Parkway. His father was a machinist and his older brothers, Michael and Louis, were a plumber and decorator. In 1928 Biro was sports cartoonist for the Long Island Daily Press, according to Who’s Who in America. As a Jamaica High School student, he was an assistant to the art editor on the school’s yearbook, The Oracle, June 1929. 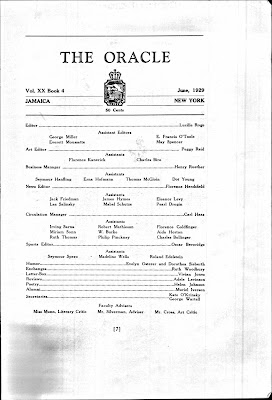 In the 1930 census the Biros resided in Queens at 147-52 Grand Central Parkway. His Hungarian parents emigrated in 1898; his father was an engineer at a hotel. Biro’s brother Louis was an advertising artist. At this time, the earliest documentation of Biro’s professional career was found in the Daily Star, (Long Island City, New York), September 9, 1932:

Young Mr. Biro is a well-known song writer. Among the guests were

Who’s Who of American Comic Books 1928–1999 said Biro worked for the Fleischer animation studio in the 1930s, however the Who’s Who in America entry does not include Fleischer; it said he was an animator at Van Beuren Productions, R.К.О., from 1933 to 1936; then animation director of Audio Productions, from 1936 to 1937, and the Hastings Studio in 1937. He left animation to become art director at the Harry “A” Chesler Syndicate, from 1937 to 1938, and he drew the Foxy Grandpa comic strip (note from Allan: the only Chesler strip known to have actually run in newspapers was a revival of Little Nemo -- this version of Foxy Grandpa has as far as I know not yet been found actually running in a newspaper). The cover of Syndicate Features, December 15, 1937, featured a portrait of Carl E. Schultze, Foxy Grandpa and Biro. Around the same time he produced another strip, Goodbyland, and it’s not known if it was ever published. From the Chesler Syndicate he went to the comic book publisher MLJ from 1938 to 1939. 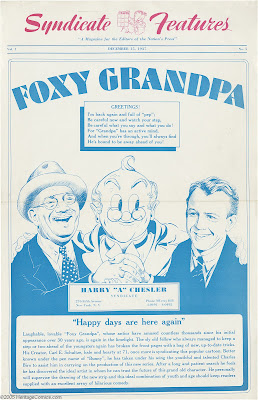 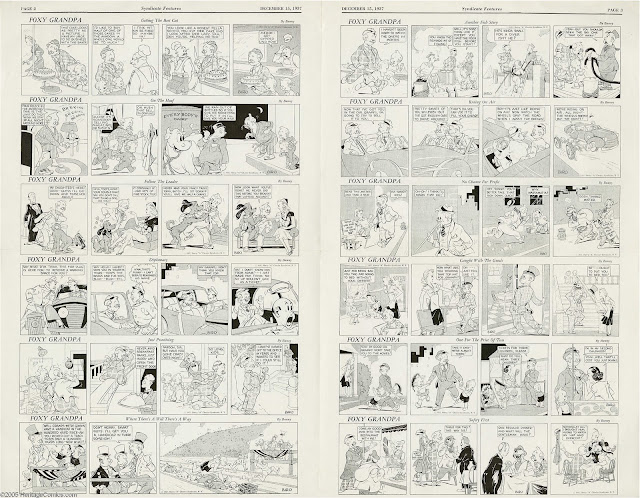 His art training was intermittent according to Who’s Who in America: Brooklyn Museum School of Art, 1932; Art Students League, 1934; and Grand Central School of Art, 1939. On September 13, 1938, he married Frances Bishop.

In the 1940 census the couple lived in Sunnyside, New York at 4542 41st Road. He had four years of high school and his occupation was artist in the publishing industry. In the column for 1939 income, he earned 700 dollars, and his wife $1,250. Biro continued work in the comic book industry: editor-in-chief of Comic House, Inc., from 1939 to 1940; editorial director and editor-in-chief of Gleason Publications, since 1945; and president of Biro-Wood Productions, since 1945. Some of his comic book credits are here. He was credited with another comic strip, Judge Sterling, that may or may not have been published in 1946. The Kingston Daily Freeman (New York), October 12, 1946, noted one of his visits: “Mr. and Mrs. Carl Hubbell had as their week-end guests Mr. and Mrs. Charles Biro. Mr. Biro is Mr. Hubbell’s editor.” He contributed illustrations to Pat the Pilot, first published in 1949.

Among the co-conspirators at the range with Mr. Melchior were cartoonists Ham Fisher of “Joe Palooka” fame and Charles Biro, who left the fate of Pee Wee, Scare Crow and the other “Little Wise Guys” in midair to don his starched chef’s cap and apron. The latter costume, gay with red and black inscriptions, was worn by members over their conservative business suits. It was designed by fellow member and assistant chef of the day, Russell Patterson, the illustrator….

During the month of October 1952, Stars and Stripes, September 21, 1952, reported that nine cartoonists were scheduled to visit American bases in Great Britain and France. They were “…Russell Patterson, the famed beautiful-girl illustrator (‘Mamie’); Dick Wingert (‘Hubert’), C.D. Russell (‘Pete the Tramp’), Bob Dunn (‘Just the Type’), all of King Features Syndicate; Al Posen (‘Sweeney and Son’), Bill Holman (‘Smoky Stover’ and ‘Nuts and Bolts’) and Gus Edson (‘The Gumps’), all of the Chicago Tribune-New York News Syndicate; Bob Montana (‘Archie’), McClure Newspaper Syndicate, and Charles Biro (comic books, ‘Dare Devil’ and ‘Peewee’).” Their Christmas greetings were published in the December 24, 1952, Stars and Stripes; Biro’s greeting is below. 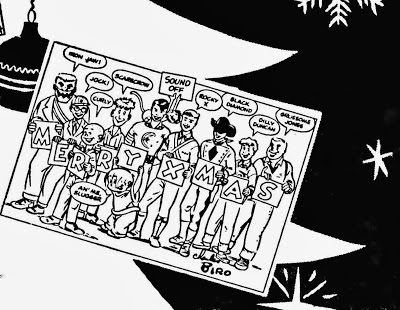 The Times, October 1, 1953, noted Biro’s leasing of space in the Steinway Building, 109 West 57th Street, in Manhattan. Maybe it was this location where he produced an eight-page comic book about the State Training School for Boys at Warwick, New York. The school was established to help juvenile delinquents. The April 17, 1954, Times reported the use of the comic book and printed two panels (below).

When his career in comics ended in the mid-1950s, he made the switch to graphic design in television. From 1962 to 1972, he was employed at NBC. Biro passed away March 4, 1972. The Comics Journal #245, August 2002, published an interview with Creig Flessel who recalled a couple of incidents regarding Biro. Photos of Biro are here. An issue of Uncle Charlie’s Fables can be viewed here.

Comments:
Thanks for your wonderful articles Alex! Is there any way of getting a higher res copy of these Biro Foxy Grandpa dailies? I'd love to be able to read them better. Thanks for your article and your help.
Mark Kausler

On ebay there is an original panel Biro probably tried to sell about television. Fits in rather nicely with his later career.

Biro is pictured on the 1930-1931 Fleischer studio personnel chart. Goobyland was published in the 1938 Joe Penner-Cocomalt Big Book of Comics.