Since leaving college in my junior year, I have been cartoonist on the Boston Traveler and the Boston Herald. At present I am with the New York Globe. I am also studying playwriting. I was married June 8, 1907, to Florence Judd, at Brookline, Mass. Donald, born April 5, 1908. Permanent address: Associated Newspapers, Singer Building, New York, N.Y.

Donald Crassous Bartholomew was born at Bloomfield, N.J., October 31, 1882. His parents were Frank Bartholomew and Adele Sanderson. He prepared for college at Stone's School, Boston, Mass., and was in college from 1902 to 1905. He married Florence Judd, at Brookline, Mass., June 8, 1907, and had two children: Donald, born April 5, 1908, and Elise, born June 20, 1912. He left college at the close of his junior year. At that time he was doing cartoon and assignment work on the Boston Post, signing himself "Bart". He continued his work on this paper while accepting a position of assistant advertising manager for Filene Brothers Company, in Boston. He remained with Mr. Filene one and a half years and left that concern to open a general advertising office. At this time he became advertising manager for the White Cross Milk Company, continuing his newspaper work on the Boston Herald, where he produced a popular Sunday comic under the title of "George and his Conscience." In 1909 the family removed to Brookline and he launched a mail-order bookbinding business which he ran for some time. In the fall of 1911 he received an offer from the Newark (N.J.) News and the family removed to New York. Bart remained on this paper several months, when he accepted a position on the New York Globe. He drew and wrote daily articles while on this paper. Bart remained with the Globe until late spring, 1913, and left to join the Associated Newspapers of the Hearst Syndicate. It was the dream of his life some day to write a play and with this goal constantly before him studied and read at every opportunity. In the fall of 1913 he wrote and had accepted his first story: "My Uncle and the Green Parrot". This story appeared in Collier's for October, 1913. His second story was in preparation at the time of his death. The family had removed to White Plains in the summer of 1913, and it was there that Bart died suddenly, December 19, of pneumonia. He illustrated: "The Excuse Book", "The Cook-ed Up Peary-odd-ical", and "Around the Clock with the Bounder".

[Donald C. Bartholomew was not found in any census records. One of his strips was the Extraordinary Adventures of Joseph, James and John. The New-York Tribune (New York) reported his death on December 21, 1913.

Donald C. Bartholomew, a cartoonist, died Friday at his home, No. 23 De Kalb avenue, White Plains, from pneumonia. He moved in August to White Plains from this city, where he was a cartoonist on "The Globe" staff. His work was signed "Bart."

Mr. Bartholomew was thirty years old and leaves a wife and two small children, Donald and Elsie. The funeral will be held this afternoon at 4 o'clock at the house and will be private.] 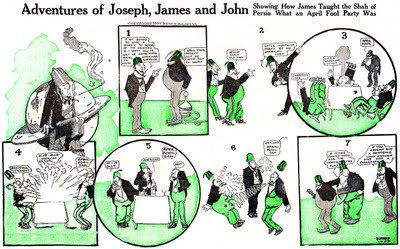