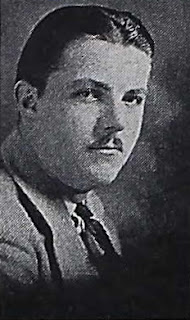 Estill Bradford “Sullie” Sullivan was born in Palmyra, Missouri on August 28 1905. His birthplace was found on a 1927 passenger list which had his birth date as “June 4, 1905.” His birth date was found in the Social Security Death Index and a public record index at Ancestry.com.

The 1920 census recorded him and his mother in Palmyra on Main Street. She was unemployed. Information about his early education has not been found. In the University of Missouri Bulletin, General Series 1926, No. 1, he was listed as a first year journalism major. In the yearbook, The Savitar 1927, he was a senior and member of Sigma Delta Chi. (see photo) The University of Missouri Bulletin, Journalism Series, Issue 50, 1928 had this listing: “Sullivan, Estill Bradford, B.J. ’27; now on European tour; home address, Palmyra, Mo.” A passenger list said he returned on September 3, 1927 at Quebec, Canada before entering the U.S.

Sullivan has not yet been found in the 1930 census.

In 1940 he lived in Chicago at 1235 Loyola Avenue since 1935. His occupation was cartoonist at a commercial artist agency. In E&P's syndicate directories he was credited with the comic strips Gargoyle and Gadget (1936-1945), and Abe Martin Junior (1938-39) (neither feature has yet been documented as actually running in a newspaper). Both were distributed by National Newspaper Syndicate which was based in Elkhart Indiana. As 'Sullie', he may be the creator behind Bucks McKale, which ran in the Chicago Tribune Comic Book from June 30, 1940 to April 11, 1943. (Some sources named Vin Sullivan as Bucks creator.) Regarding his art training, he may have attended the Chicago Academy of Fine Arts or the School of the Art Institute of Chicago in the late 1920s or early 1930s.

His mother passed away in 1941. At some point he moved to Missouri. On March 31, 1942 he enlisted in the Army Air Corps at Lockbourne Army Air Base in Columbus, Ohio. Where he served and how long is not known.

Presumably he remained in the art field after World War II. His whereabouts from the 1950s onward is not known. A public record at Ancestry.com had this address: “1320 W Columbia Ave, Chicago, IL, 60626-4361,” but no date was stated.

Sullivan passed away January 13, 1982 according to the Cook County, Illinois Death Index, 1908–1988. An obituary has not been found. He was buried in the family plot at Greenwood Cemetery, Palmyra, Missouri. He was listed in the 1984 Annual Report of the Art Institute of Chicago.

Comments:
A tip of the Hatlo hat to Alex for finding the mysterious E. B. Sullivan. Great detective work.
D.D.Degg

Estil Sullivan was my mother's cousin. I really appreciated reading this summary of his life. He sent Christmas greetings to family members on postcards. I still have a few of those. The family history is that he started a short-lived comic strip named "Sullie" just before World War II. His mother was Maggie Dickson Sullivan. The family home was 500 South Main in Palmyra. The house was long ago torn down and a church now occupies the site. Thanks again, Margaret Nichols at pegnichols@gmail.com

Lockbourne Army Air Force Base, where Estill B. Sullivan enlisted in March, 1942, is Columbus, OHIO, not Missouri.