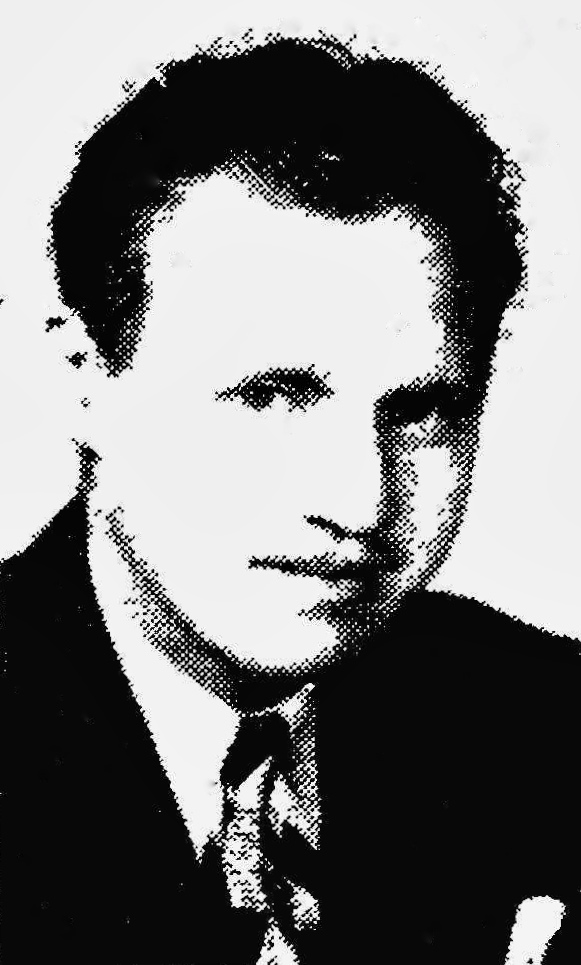 In the 1920 U.S. Federal Census, he was the oldest of three children born to Charles and Emma. His father was a Western Union telegraph operator. They lived in Clearfield at 615 Turnpike Avenue. The Progress, August 31, 1950, said:

…at the age of nine, he won his first prize—a blue ribbon at the Clearfield County Fair art exhibit.

Later, as a student in the Clearfield High School he originated the “Bison,” which became the official symbol of the school as well as the name of the annual yearbook.

Turning his talents into dollars and cents the you artist accepted his first commercial assignment while a senior at the high school, painting the mural on the walls of the Dimeling Hotel Coffee Shop. Visitors to the Coffee Shop still pause to admire the murals which depict the Indian legend concerning the history of Clearfield.

The 1930 census recorded him in Clearfield, at 715 Turnpike Avenue, where he was the oldest of seven children. The Progress, January 31, 1930, reported his brief return high school: “…A chalk talk by Fred Meagher made a most pleasing interlude in the musical program and showed he had improved greatly in ability both as an artist and as a performer since last year.” Two years later he was a ceramic art major at Alfred University in Alfred, New York. The school yearbook, The Kanakadea 1933, said he was a freshman and a Theta Kappa Nu pledge. Instead of continuing his education, the Progress 1950 profile said: “…he worked a year at Kurtz Brothers factory illustrating calendars, catalogs, etc., before branching out on his own and opening an advertising firm….” His new venture was reported in the Progress, December 30, 1933:

Unique Business Is Organized by Local Young Men
Fred. L. Meagher Who Did Dimeling Murals Sets Up Organization to Carry on Diversified Work
A “New Deal” in Art


An unusual and unique business enterprise which was originated by a group of local young men and which offers a wide range of opportunities will be formally opened here hex Tuesday when the Fred L. Meagher Company, artists, designers and decorators, avail their services to the public.

This group of young men, composed of Fred Meagher, Charles Mann, Alfred Koozer, all of Clearfield, and Jack Anderson of Kane composed an organization catering to the interests of business men, professional men and individual alike and is equipped to serve them in advancing themselves in the world of business and professions, or likewise to serve in a professional way through the medium of decorative and advertising art….

Fred L. Meagher Goes with the Philadelphia Inquirer Art Dept.
Fred L Meagher of the Fred L. Meagher Company of Clearfield will leave here tomorrow for Philadelphia to become assistant to Mr. A.I. Yole, Director of the art department of the Philadelphia Inquirer. His new connection will not interfere with the continuance of his business here which is in the capable hands of Paul Kane, Charles Mann and Jack Anderson who will have the benefit of Mr. Meagher’s advice, counsel and talent at all times….

A few days ago he had occasion to visit Philadelphia and in the course of his rounds gained an interview with an artist high in the ranks of newspaperdom. Fred had some of his work along and offered it for criticism following which it was suggested that he call on Mr. Yole, himself an authority on art, and director of the art department of the Philadelphia Inquirer. A pleasant, though brisk interview and vising of Fred’s art work ensued during which Mr. Yole asked Mr. Meagher what he would take and come with him. “Make me an offer,” Fred countered. The offer was made and it was at a figure that no budding artist ever dreamed of getting.

His stay came to an abrupt end after the gubernatorial election. The Progress, August 17, 1971, reprinted the Jersey Free Press (Phillipsburg, New Jersey), July 28, 1971, profile of Meagher and said:

At the time there was a bitter gubernatorial race in Pennsylvania. the paper had taken a stand against one of the candidates and it was Meagher’s job to draw cartoons which made the candidate appear like a drinking, high-living, shady character.

As it turned out, this candidate won the election. He and his supporters bought the Philadelphia Inquirer….

Meagher was fired, but the next day he was drawing cartoons for the New York Sun and New York Herald. Those cartoons were directed at gangsters and he explained to the Free Press what happened:

“One night when I went back to my apartment, I found a note shoved under the door. It read, ‘Your next cartoon will be your last.’

“The paper gave me another job, doing an entirely different kind of work and without a by-line. But I got the message and gave up political cartooning.”

Around 1936 he entered the animation field, far away from New York. The Progress, January 23, 1937, said he “was able to obtain a position under Walt Disney, famous as the creator of ‘Mickey Mouse.’ Later he was employed at the R.K.O Studios in Hollywood until he again returned east and worked for the Philadelphia Inquirer…” then became “Art Director of the catalogue issued by the Roosevelt Air Field, Long Island, one of the most famous air fields in the country.” The 1950 Progress profile, said: “…he accepted a position as an animator’s assistant for R.K.O. pictures and still later the job of animator and story synchronizer for Walt Disney…..”. It’s possible he worked on Disney’s Snow White and the Seven Dwarfs which was released in 1937. The 1971 profile said he drew Donald Duck.

According to Who’s Who in American Comic Books 1928–1999 some of his other work, in the late-1930s, were the juvenile books Flash Gordon, Tailspin Tommy, and Texas Rangers (He contributed art to the 1942 edition of Your Wings which was originally published in 1936 and illustrated by Frank Carlson.); the Dan Dunn Magazine; and the promotional comic Wings Winfair for the Gulf Funny Weekly.

In the 1940 census he, his wife, Jane, and mother-in-law lived in Hempstead, New York at 5 Barnes Avenue. His occupation was newspaper comic strip artist. Who’s Who credits him with the Tom Mix promotional comic, from 1940 to 1942, for the Ralston-Purina Company. This comic probably helped him sell Vesta West and Her Horse Traveler to the Chicago Tribune Comic Book. His tenure was brief, from August 30 to October 4, 1942. It was taken over by Ray Bailey. Perhaps the demands of his full-time job forced him to stop freelance work. Who’s Who shows a gap from 1943 to 1948 then he had a few assignments in 1949. According to the 1950 Progress profile, during World War II he was in the 104th Calvary Regiment.

The Progress, May 14, 1945, said for the past eight years he had been illustrating books for Assen Jordanoff. When the Jordanoff Aviation Corporation was formed in 1943, “Meagher was appointed director of production and directed some of the first training, operation and maintenance manuals produced for both the Army and the Navy.” (A photo of the art department is here.) His promotion to vice-president was announced in the New York Times, May 4, 1945, and the Progress ten days later.

According to the 1950 Progress profile, after the war Meagher “opened his own industrial designing, advertising and sales promotion agency in New York.” His love of the Old West guided him to draw the 1950 Straight Arrow comic book, for Magazine Enterprises, and the Broncho Bill comic strip, for United Features Syndicate, from July 10 to 15, 1950. He transformed the character into Buffalo Bill, which he and United jointly owned, and began July 17. The strip ended in 1956. A television series, starring Meagher as Buffalo Bill, was planned, and as well as related merchandise. In a follow-up article, September 22, 1950, the Progress said he grew a mustache and goatee and the filming would be on his farm near Huntington, Long Island. It's not known what happened to the show or if any footage exists.


The 1971 Progress profile said he stopped cartooning and found work as a special projects designer at the American Can Company, from 1955 to 1969. He designed packages from “peanuts to battleships.” In the process he obtained several patents.

He lived on a converted farmhouse he named the “Circle M Ranch”, located north of Blairstown, New Jersey, and was married to “the former Ruthanne Culver of Los Angeles.” Eventually they settled in Smith Valley, Nevada.

Meagher passed away at his home January 26, 1976. His death was reported two days later in the Reno Evening Gazette and the Nevada State Journal. Both papers said: “On Oct. 30, 1942, Meagher married Ruthanne Culver,” however, he was still married to Jane in 1950. What happened to her is not known.

(J.J. Sedelmaier’s profusely illustrated post “Illustrated Aviation Books By Assen Jordanoff” has many samples of Meagher’s work. Meagher’s comic book credits are here. The 1971 Progress profile said he did a Saturday Evening Post cover by time he was 20 which would be 1932. I did not find it at this site. He was credited with Mobil Oil’s “Flying Red Horse” but Pegasus was in existence long before his version. It’s not clear when his Pegasus appeared or how it was used. He was also credited with helping develop Smokey the Bear.)