Stripper's Guide Bookshelf: Al Capp - A Life to the Contrary 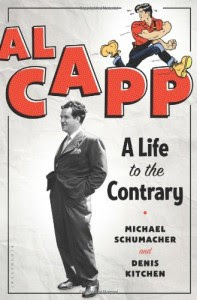 Al Capp: A Life to the Contrary
by Michael Schumacher and Denis Kitchen


Michael Schumaker and Denis Kitchen have produced a work of great merit in  "Al Capp -- A Life to the Contrary". Capp is a tough subject for a biographer because he was, to put it baldly, a bit of a louse in some ways. The authors discuss all of Capp's myriad shortcomings, but manage to do so in an even-handed way that allows the reader to form their own conclusions about the man.

Of course, whatever you feel about Capp, you've got to admit that he was a genius, and that his greatest creation, Li'l Abner, was one of the best written and drawn comic strips of all time. As such, getting a look into the mind of the man is fascinating. Anybody coming to this website knows at least the broad strokes of Al Capp's story, and this biography does a superb job of filling in all the blank spots that we've always wondered about. The authors have uncovered a treasure trove of source materials in what I know has been a very long research journey, and have used them judiciously. This is not one of those long-winded biographies that seeks to dump every little mote of knowledge they have. At 263 pages, I think we get pretty much everything we need to know about Capp's life without all the ephemera and minutiae that research of this scope inevitably uncovers.

Naturally I have a few very minor quibbles. First, Capp's brother Bence, who I've heard very little about before, is discussed at length, at least in terms of his tempestuous relationship with Al. That is welcome new information. However, I would have also liked to learn more about Capp's other brother, Elliot, an interesting guy who had a long and varied career in comics. However, the book is not about him and I certainly can't fault the authors for giving him slight coverage.

Another matter are the supposedly "X-rated" panels in Li'l Abner. I've seen all this evidence before, and my opinion hasn't changed on this go 'round. I say anyone who sees a schlong in a Schmoo, or a twat in a tree trunk, is an example of arrested development, a mental pre-pubescent for whom folding the Land o' Lakes indian girl so that she seems to have naked breasts is the summit of erotic sophistication. Ham Fisher and Dr. Wertham, the guys who are famed for poring through the strip finding such things, fit that description. It may even be that Al Capp really did intentionally put some of those things in the strip in the rather juvenile delight of getting away with something.  However, I say it takes a truly puerile mind to track down such occurrences in Li'l Abner. Although the authors are required to report on all this silliness, I can't believe they actually buy into it. They claim, for instance, that a vaguely phallic shaped hamhock is 'a blatant example of sexual innuendo.' I mean, for cryin' out loud fellas, that's what a hamhock looks like. How would you like Capp to draw it? This is the sort of silliness that could be taken seriously in the ass-clenched, button-down, call the chicken breast white meat 1950s, but today it all looks a little, no make that a lot, infantile.

Beyond simple differences of opinion, I have to report on a couple of boners, one from the authors, one probably from Capp himself. First is that the Li'l Abner comic strip, according to every reference, including co-author Denis Kitchen's own reprint book, began on August 13 1934. My jaw really dropped when I found it moved back a week, to August 8 in this book. Huh?

The second boner is most likely Capp's in retelling a story, and it gave me a laugh, so I pass it along. In 1942, Capp was threatened by Margaret Mitchell's husband with a lawsuit over a parody of Gone With The Wind in Li'l Abner. In response to that threat, we are told, Capp suggested that they ought to stick to reading Rex Morgan MD. Unfortunately the famed author and her hubby didn't have that option, because Rex Morgan MD did not exist until six years later!

A Life to the Contrary is one of the better cartoonist biographies I've read. It is almost as entertaining as Capp's comic strip itself, not to mention as revealing as Daisy Mae's outfit.I heartily recommend it.

Comments:
I read this a few weeks ago. What a swine of a human being. I felt like washing my hands of the thing after reading it -- just glad that I got it from the library and didn't have to pay for it. Capp was a grumpy, bitter, hateful guy who despised his assistants, his children, his wife and ultimately his readers. His many affairs and the tendency to expose himself to college girls -- and presumably, if successful, who did a lot more than that -- was enough for me. I was also a bit disappointed in some of his contemporaries reactions -- seems like it was just a matter of boys will be boys and whaddya gonna do? And any words or writings from Capp read like some kind of historical fiction. He changed stories, names and dates so often I'd almost bet he couldn't even remember what was the truth. And some of it, I think, are simply public-relation-type fabrications, anyway. I wonder if he was that good of an actor in front of his children. I maybe believed about a quarter of whatever Capp said or wrote and, in the end, believed very little. Other than the swine part, though.

Thanks for reminding me I have to get this as holiay literature. And indeed, I wish some had done a book on Elliot Capp when he was still alive. Now there was a terrific comic strip writer.