Juanita Hamel was born in De Soto, Missouri on April 27, 1891. Her birthplace was found on a 1922 passenger list which had her birthdate as April 27, 1893. On the 1900 U.S. Federal Census, her birth information was recorded as April 1891, so I assume her parents provided the correct month and year. Her name was misspelled “Wanita”. She was the oldest of four children born to F.G. and Lucy; they resided in De Soto.

In 1910, her mother was the head of the household, a widow and self-employed milliner. They lived in Wellston, Missouri at 6219 Wells Avenue. Hamel’s college art training was mentioned in the St. Louis Reference Record (1927):

Her participation in a newspaper exhibition was covered in Cartoons Magazine, February 1916.


Press Artists’ ExhibitThe recent exhibition of the St. Louis newspaper artists at the St. Louis Press Club, which was extended because of its popularity, closed December 13, 1915. One hundred and twenty pictures were shown, including oil paintings, water colors, crayon, and pen and ink sketches. Among the artists represented were A. Russell, R.J. Bieger, Arthur L. Friedrich, George Grinham and Percy Vogt, of the Globe-Democrat; Arthur Button, Gus T. Coleman and A.B. Chapin, of the Republic; Miss Juanita Hamel and Elmer Pins, of the Times; Frederick Tuthill, of the Star, and D.R. Fitzpatrick, of the Post-Dispatch.

The St. Louis (Missouri) Directory 1916 listed her address as “505 N Spring av” and occupation as artist. The St. Louis Reference Record said, “Juanita Hamel, the first lady artist of the St. Louis Times, was a student at the Washington University’s art school prior to her engagement by the paper. From the Times Miss Hamel went to a Chicago paper [around 1917], I have heard…” She produced artwork for the Chicago Herald which held the copyright. (Catalogue of Copyright Entries, 1917, Volume 14, Number 7, and 11; and Volume 15, Number 4.) Her illustrations were published in many newspapers. (Go to Google News and search, in double quotes, “by juanita hamel”.)  A poster with her art is at the Hoover Institution, Stanford University Library and Archives. The Library of Congress has two of her drawings, Fashionable woman and “Mother, my fiancé”. The Fourth Estate, May 11, 1918, published the following item: “Ted Brown, cartoonist for the Chicago Daily News, won first prize in the contest for newspaper artists drawing Liberty Loan designs. C. Orr of the Tribune was second and Miss Juanita Hamel of the Herald third.”

The 1920 census and New York City Directory 1920 have her address as 23 Christopher Street; the census enumerator misspelled her last name as “Harnel”. She was a newspaper artist. On June 28, 1922, she sailed from Boulogne-sur-Mer, France and arrived in New York on July 9. Her address was 96 Grove Street. A few months later, in October, she visited Bermuda. The New York Times, January 27, 1923, reported the results of the thirteenth annual specialty show of the American Pomeranian Club, at the Hotel Waldorf-Astoria: “Class 7—Novice Dogs, any solid color—Won by Juanita Hamel’s Early’s Black Bunny…” The St. Louis Reference Record said, “…[she] is now (1923) making sketches for the Newspaper Picture Service, with headquarters in New York City. A former St. Louis newspaper man, Moses Koenigsberg, recently was and perhaps still is the manager and president of that New York service company. The artist’s name, Juanita Hamel, in the Cleveland Plaindealer [sic] the other day (April 15, [sic] 1923) caught my eye and I stopped work to admire a sketch entitled ‘While He Waits.’ The picture was of a beautiful young lady primping before a mirror, putting on the final touches, as the reader is informed by the underlining below.” 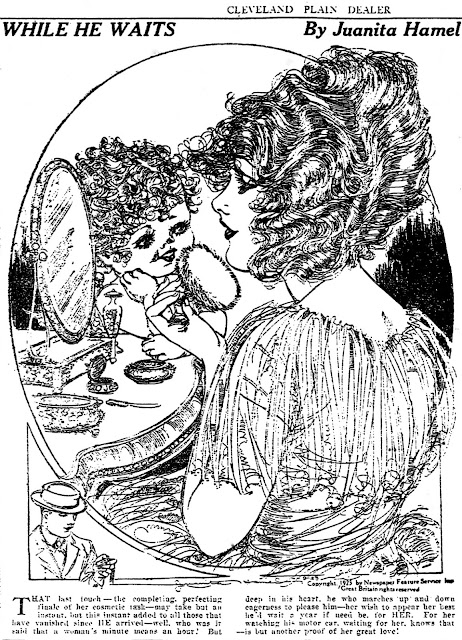 During 1926 her output of illustrations slowly decreased and, by the Fall, her illustrations disappeared from the newspapers. I can find no further mention of her in the press or books. The GenForum at Genealogy.com has information saying she married “Lord Alison Fowle” and lived in Bermuda. Several passenger lists at Ancestry.com have an Allison Fowle of Bermuda who sailed to New York City. His first two trips were in September 1923 and October 1924. His next visit to New York was on June 17, 1926, for two weeks; he stayed at the Bristol Hotel. He named his father as his nearest relative. A few months later, on September 30, he was in New York on his way to Montreal. The passenger list had Mrs. A. Fowler of Bermuda as his nearest relative. There is another list with a “Juanita Fowle”, born 1897 in St. Louis, who sailed from Hamilton, Bermuda on October 9, 1926, and arrived in New York two days later. Her husband was identified as Mr. A. Fowle of Bermuda. It appears to me Hamel had married Fowle in Bermuda over the summer; news of their marriage has not been found. On the list, her New York address was 33 West 8th Street, which is about a five-minute walk to the Christopher and Grove street addresses mentioned earlier. I’m guessing she waited for her husband’s return from Montreal and then sailed home with him.

Curiously in July 1927, her next trip to New York, she was listed as an alien, a citizen of Great Britain. A few months later, in November, she returned, as a U.S. citizen, to New York and stayed at the Ritz Carlton Hotel. Only once did they travel together, on February 25, 1928, to the United States. During his two week visit, it appears they went to St. Louis and stayed at 4118 Ashland Avenue. Her subsequent visits alternated between New York City and St. Louis addresses. Apparently, her final U.S. visit was in August 1935.

Mrs. Allison Fowle, the former Miss Juanita Hamel of St. Louis, once a newspaper artist, died yesterday of a cerebral hemorrhage at her home in Hamilton, Bermuda. She was 42 years old. After studying art at the St. Louis School of Fine Arts and in Chicago, she began drawing for newspapers in St. Louis. Later her work was syndicated. Following an illness in New York, she moved to Bermuda 10 years ago. There she met and married Fowle, who is in the shipping business. Her mother, Mrs. Lucille Hamel Craven, lives at 4336 Olive street. Two brothers also survive. The funeral will be in Hamilton.

The St. Louis Public Library’s “St. Louis Artists Files” has a file on her.

Hamel’s husband fought in World War II. The Royal Gazette Online said, “…A number of men of the Bermuda Volunteer Rifle Corps went for duty with the Lincolnshire Regiment….A later contingent crossed the English Channel to join the late 1944 push from France into Germany. In late August, the first to be lost was Allison William Bluck Fowle, buried at Calvados, France….”

Comments:
Juanita is my great aunt! We have family photos and such, but some of her life is a mystery to us as well.

Thanks, Darlene. Hamel's profile has been updated.

i have several of her drawings

The Gaylord Music Library at Washington University has just acquired a piece of sheet music with an illustration by Hamel on the title page. The description may be seen at http://catalog.wustl.edu:81/search/t?SEARCH=song+came+back

I own several issues of the Chicago newspaper that she briefly worked for. I've always been a fan of her works, since I first became a pulp fiction fan. Back then I wondered what female artists of quality predated such renown artists as Margaret Brundage. To this degree, I turn to Juanita Hamel and Dorothy Dulin, as my Great War era heroes. Cordially, Morgan Wallace

I have an original piece of pen and ink by Juanita Hamel don't know much about it or what it goes for but I'd like to sell it. Email me at khattars96@gmail.com if you can help