William Ogg FitzGerald was born in Michigan on October 10, 1884. His birthplace was recorded in the censuses, and the birth date and full name was found on his World War I draft card.

In the 1900 U.S. Federal Census, FitzGerald was the second of two children born to Lucius, a physician, and Elizabeth, both emigrants; his father was Canadian and his mother Scottish. They resided in Oliver, Michigan.

Information regarding FitzGerald’s education and art training has not been found.

FitzGerald and his mother, a divorcee, lived in Detroit, Michigan at 105 Stanley Avenue. His occupation was cartoonist. A single sentence in Cartoons Magazine, March 1916, noted FitzGerald’s whereabouts: “W.O. Fitzgerald has been engaged as staff cartoonist on Dome Echoes, a San Francisco publication.” A 1917 San Francisco city directory listed FitzGerald as an artist at 1144 Market Street.

On September 12, 1918, FitzGerald signed his World War I draft card. He and his wife, Grace, lived at 37 Ridge Road, in Royal Oak, Michigan. His occupation was “Artist Manager Art Department, Detroit News.”

According to the 1920 census, FitzGerald remained in Royal Oak with his wife and daughter. He continued his job as a manager at a newspaper.

American Newspaper Comics (2012), said he was the first of three artists to continue Doings of the Duffs which was created by Walter R. Allman. FitzGerald produced the strip from January 26 to June 6, 1925. The Lone Tree Reporter (Iowa), January 29, 1925, reported the revival of the strip:


Readers of various daily papers which for several years contained the comic strip, “Doings of the Duffs” will learn with pleasure that although Mr. W.R. Allman, the originator, will never again draw a line, Mr. W.O. Fitzgerald of Detroit has made an intense study study of it for the past many weeks and has taken it up right where Allman left it. And now the Duffs are appearing in the Muscatine Journal and in other daily papers and thousands of readers are again reading their humorous lines. 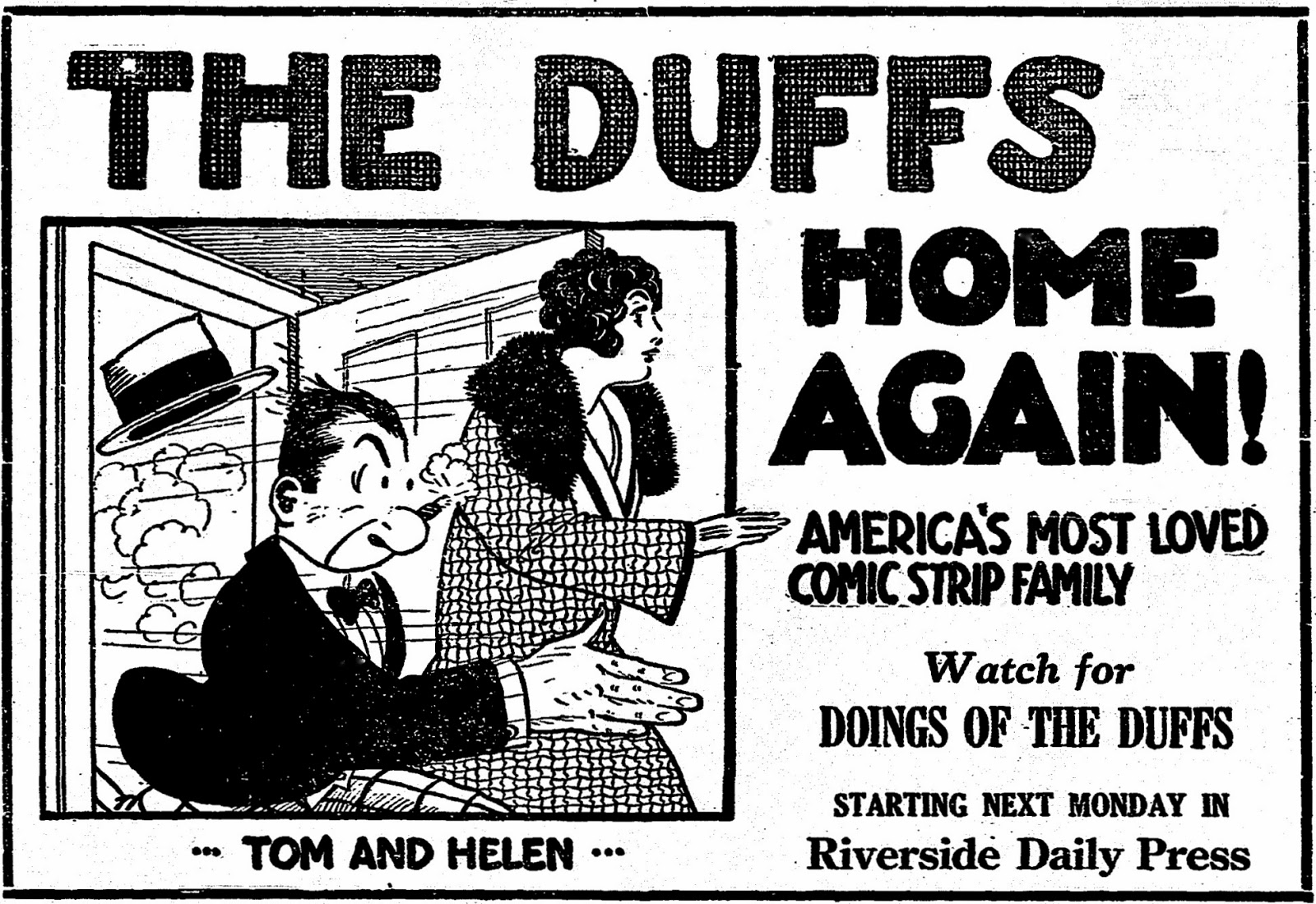 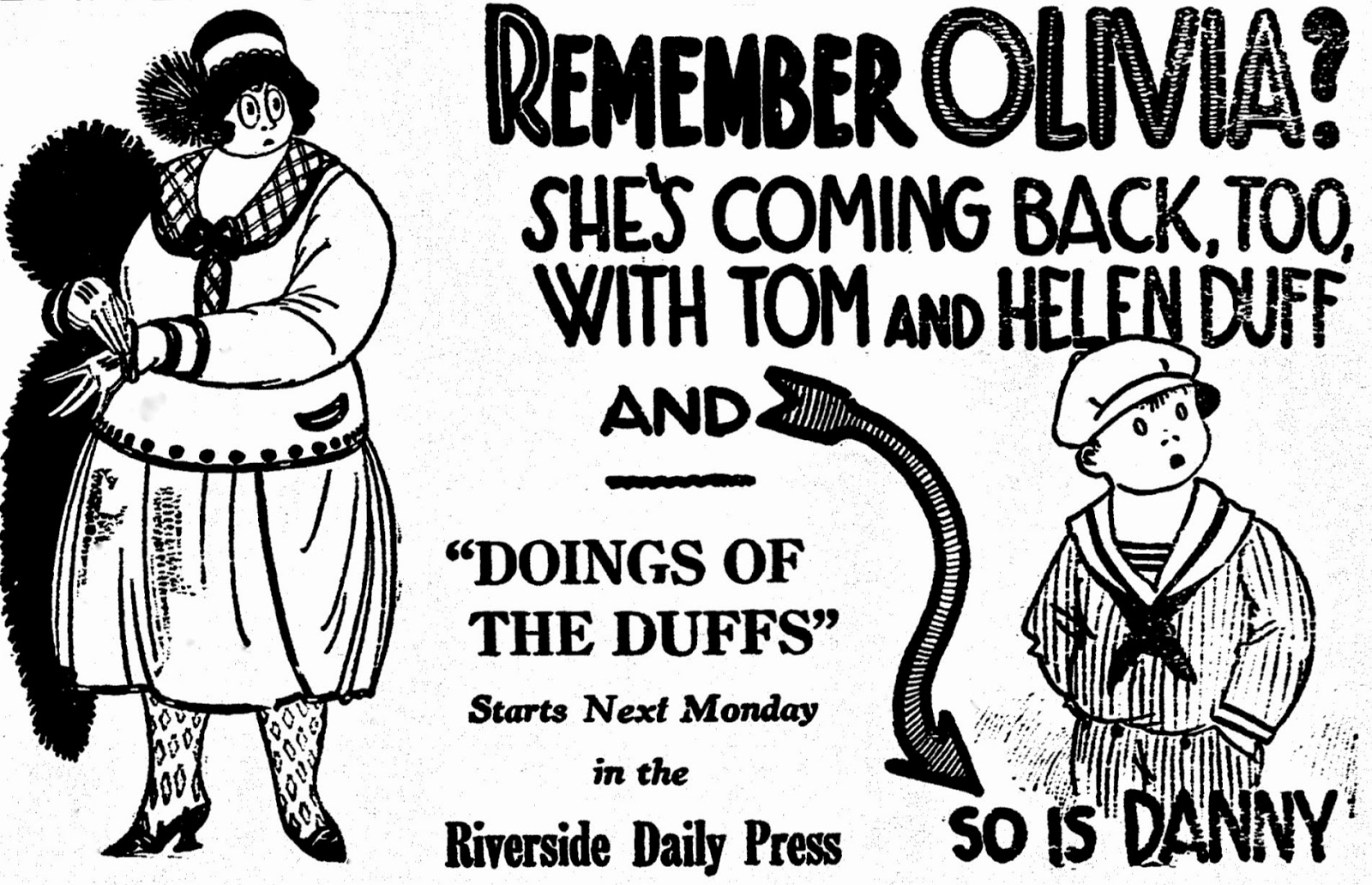 FitzGerald produced drawings for a number of local periodicals, including the Detroit Motor News, whose May 1926 issue mentioned his art exhibit:


Our Artist ExhibitsBeginning April 12 William Ogg FitzGerald, with whose illustrations all our readers are familiar, will place an exhibition of his drawings on display for one month in the art gallery on the mezzanine floor of the Bonstelle Playhouse.

In the mid-1920s, the Dearborn Independent published FitzGerald’s work.

Historical Detroit (1926) was the story of early Detroit as told by twenty bronze tablets. FitzGerald’s artwork was acknowledged.

FitzGerald was the father of four children in the 1930 census. The family still lived in Royal Oak but at a different address, 1074 Harwood Avenue. He was a commercial artist. One of his projects was illustrating a set of plates about Detroit and Michigan. They were manufactured in England.


In this company’s booth is a series of poster murals depicting the uses of steel, and a large painting giving a conception of the future of transportation, the work of William Ogg FitzGerald, Detroit artist.

FitzGerald illustrated the 1934  book, The Way Out: A Common Sense Solution to Our Economic Problems.

The May 1936 issue of the Magazine of the Women’s City Club of Detroit noted that FitzGerald had moved to New York City:


Spring seems to draw Detroiters to New York. Mrs. William Ogg Fitzgerald has been flitting about the city recently, visiting her husband who is now on the staff of the Wall Street Journal and Barron's Weekly….

Old Banking Landmarks of New York was illustrated by FitzGerald and published by Barron’s in 1936.

In 1940, FitzGerald resided in Mamaroneck, New York at 24 Barnum Road. He was a newspaper artist.

FitzGerald passed away July 1967, in New York, according to the Social Security Death Index. His last residence was in Larchmont. An obituary has not been found.