News of Yore 1913: W.K. Starrett on the Cartooning Life 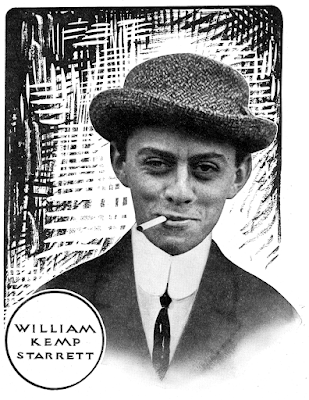 A Day With a Cartoonist

by W. K. Starrett of the Albany Knickerbocker Press

Why not be a car­toonist ? Easy work and good pay—we teach you in ten easy lessons. Anyone who can draw can earn from three to five hundred dollars a minute drawing cartoons. Easy as rolling off a log. Write for particulars — that's the way the ad reads, so why not ?

To make a cartoonist, take one good editorial writer and mix with two barrels of nerve, one bushel of talent for drawing, a ton of humor, and an equal proportion of patience. Shake thoroughly before using. 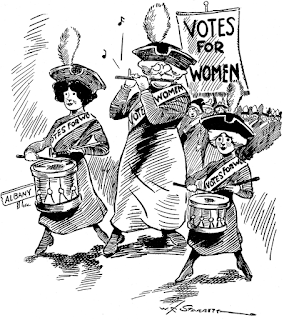 After hanging over a drawing-board for about seven years and wasting a number of gallons of good ink and several thousand sheets of bristol board, go out and separate some gullible editor from a few frog-skins per week in exchange for your masterpieces.

And then read the criticisms on your own editorial page from "Constant Reader."

After you get the job you hie yourself to the office at 7 a. m., grab all of the morning papers, and proceed to dig up an idea. Possibly the boss has requested something very funny for that day, and after scanning the columns telling of murders, suicides, divorces, hold-ups, accidents, and tales of woe, you wonder if there is really anything funny to draw about.

After finishing the papers, you proceed to walk some ten or twenty miles up and down and around your sanctum— all the while looking for that funny idea. It's a great indoor sport, this idea chasing. Chew up several cigars. That helps sometimes. Pull a little hair out, too—if you are a real artist you can spare some. Then, when the boss shows up, put on a brave front, grin as though you thought this particular idea was the best ever, and walk into his office, walk around and look at the books and pictures with a nonchalant air. Then suddenly you are nearly startled out of your skin by a roar: "Get something NEW for a change, can't you ?"

After that go back and chew up some more cigars and walk a little—a cartoonist's life is an active life. Oh, dear me, yes!

Later on in the day—if you are doing general stuff— you will have several callers, each with about two days work, and each telling you that "It will take a few minutes, and please rush it."

After that you get your cartoon roughly sketched. About the time when you are ready to "ink in," one of the engravers will come over and sit on your table and ask "How soon?"

Then he will immediately start to tell you a better idea — oh, much better — that he thought of "this morning in the saloon around the corner." If you happen to be drawing for a certain pink sporting weekly found in barber shops and saloons, you might be able to use the idea—after a little toning down.

Then spill the ink onto your cartoon for about fifteen minutes, and tell the boy to take it to the engraver and to be careful not to step on it, and not (shout this) NOT to attempt to cut his initials in it or change the spelling.

Then you are through—with the cartoon — and after that you go to work.

But with all the trials and tribulations, the life of a cartoonist isn't so bad — if you really have the "bug"—and when at the end of the day you slip into the editor's office and hear him dictating a letter to his secretary, in reply to an applicant for your job, to the effect that Mr. You "is our cartoonist and we are well satisfied with this same Mr. You," you can go home at 1 a. m., lugging a little package labeled "encouragement"— and the thought, "Nothing to do until to-morrow."

All in all, it's like any other work game of this busy world of ours. You have your happy days, your dull days, and the days when everything goes wrong, but still there is a lot of sunshine working in through the windows and you always turn out your cartoon, the general stuff wanted by the news department and the business office without trouble.

You find a lot of good in the world and it seems easy finding for the cartoonist, and you should feel pretty well satisfied. You generally discover that all of your troubles of the day are little troubles, and, as said before, if you really have the "bug" you'll find that it is a game worth while. There is something in the feeling that you are a part of the big world and are taking part in its daily work.

Comments:
I really liked this piece and appreciate you spending the time and energy to highlight Starrett. I went online and found out a lot more. I posted a link to your blog and some other stuff over at my blog this morning. He really was a jack of all trades, going from editorial cartoons to gag cartoons to comic strips. Great to find out about a new old cartoonist! http://mikelynchcartoons.blogspot.com/2015/12/editorial-cartoonist-wk-starrett-on.html