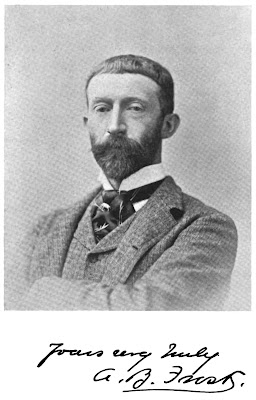 Arthur Burdett Frost was born in Philadelphia, Pennsylvania, on January 17, 1851, according to a 1906 passport application found at Ancestry.com which also has a family tree. The same birth information was published in the National Cyclopaedia of American Biography (1909) and Frost Genealogy in Five Families (1926).


John Frost, LL. D., died in this city on the evening of the 28th instant, after a brief but severe illness. He was born in Kennebunk, Maine, in 1800…Mr. Frost was always an earnest laborer in the field of letters. He entered Bowdoin College in 1818, and 1819 went to Harvard University, from which institution he was graduated in 1822….In 1828 he came to Philadelphia…Dr. Frost was engaged in writing, compiling, and publishing school and juvenile books, and popular works on the history of America and its most prominent citizens…He was well read in the voluminous theology of Swedenborg, and was a strict adherent to the faith in that religion. He leaves an amiable wife and several children to deplore the loss of an estimable father, who in the thorny path of literature struggled, if not, wisely, yet well, for forty years.

Frost has not yet been found in the 1860 U.S. Federal Census. According to an 1868 Philadelphia city directory, Frost was a clerk who resided at 2028 North 7th.

In the 1870 census, enumerated in June, Frost and his sister, Mary, were in the household of their mother. They resided in Philadelphia. Curiously, Frost’s occupation was recorded as “Insane”. In column 18, “Whether deaf and dumb, blind, insane, or idiotic” was written, in another’s handwriting: “Feble Minded” for Mary and “Insane” for Frost. There was second enumeration in November which included Frost’s older brother, Charles. This enumeration recorded just the names, age, gender and race.

City directories for the years 1870 and 1871 listed Frost as a designer whose home address was 2028 North 7th.


[Frost] went into hard business of life at fifteen years of age, in an engraver’s employ. For six months he ran errands, and scarcely touched a block. Then, according to his own account, he was told that he had no talent for drawing, and very little for running errands. It was then that he became a lithographer….

Mr. Frost has been his own drawing-master for the most part; but he attributes his first acquirements in “solid drawing” to his evening studies in the Philadelphia Academy of Fine Arts under Thomas Eakins. For about a year, from 1877 to 1878, he worked in England, but the cloudier heavens had no charm for him, and he returned to the neighborhood of Philadelphia to work at his art and play at farming….

A Pennsylvania passenger list recorded Frost’s arrival in Philadelphia on May 27, 1878. He had departed from Liverpool, England and his occupation was artist.

Frost’s earliest published work were his drawings for the 1874 book, Out of the Hurly-Burly, by Max Adeler, the pseudonym of Charles Heber Clarke, who wrote in the preface:


If this little venture shall achieve popularity, I must attribute the fact largely to the admirable pictures with which it has been adorned by the artists whose names appear upon the title-page…I wish to direct attention especially to the humorous pictures of Mr. Arthur B. Frost. This artist makes his first appearance before the public in these pages. These are the only drawings upon wood that he has ever executed, and they are so nicely illustrative of the text, they display so much originality and versatility, and they have such genial humor, with so little extravagance and exaggeration, that they seem to me surely to give promise of a prosperous career for the artist. 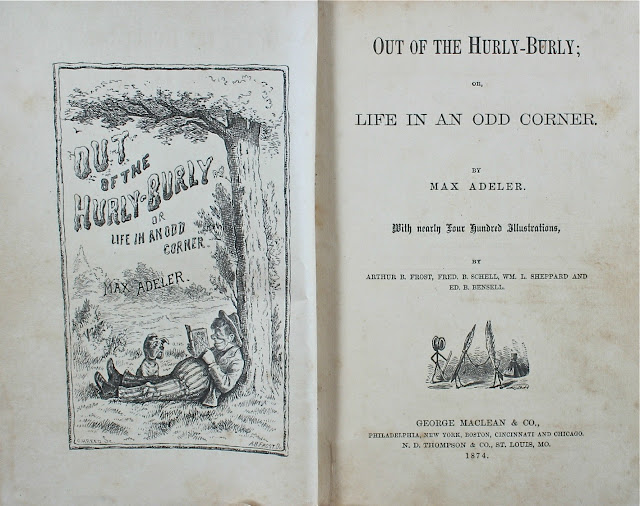 After the publication of Hurly-Burly, Harper’s said:


…within a year he was working on the New York Graphic. In 1876 he entered the studio of Messrs. Harper & Brothers, and drew side by side with Mr. Abbey, Mr. Alexander, and Mr. Reinhart—surely a remarkable quartette in the silent art. 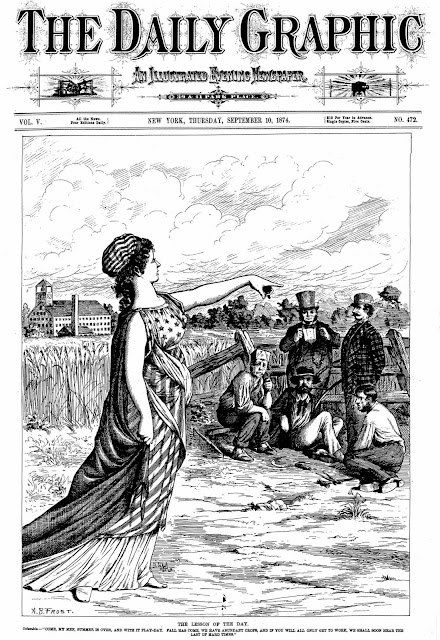 The House of Harper: A Century of Publishing in Franklin Square (1912) revealed that Frost was colorblind.

Frost’s next book was Elbow Room (1878). He belong to the Philadelphia Sketch Club. The Inquirer, January 4, 1879, noted the following:

The 1880 census recorded “Anthony B. Frost”, a Pennsylvania-born artist, who lived in Philadelphia, on Cherry Street. In his household were his bedridden mother, “Mrs. J.B. Frost”, his aunt, Mrs. Shields, and cousin, William Shields.


Frost–Phillips.—On October 19, 1883, at the Church of St. James the Less, by the Rev. Mr. Ritchie, assisted by the Rev. Mr. Newlin, Arthur B. Frost to Emily Louise, daughter of Moro Phillips.

Harper’s said, “His wife is an artist, trained in the German school, a daughter of the late Moro Phillips, of Philadelphia.” A profusely illustrated profile of Frost, in Pearson’s Magazine, April 1908, elaborated on Frost’s relationship with his father-in-law:


At the time of his marriage, the struggling illustrator and his newly-acquired father -in-law were upon terms which, to put the matter mildly, were of a strained and unlovely nature. The elder man, self-made and the possessor of a fortune, was in no way inclined to favor the poor artist suitor for his daughter’s hand, and made it plain to young Frost that he would have none of him. But, after the manner of lovers, the world over, the threat of parental displeasure did not dissuade the present pair from an early and defiant marriage and, as has often happened before and since, they were cut off from participation in the money-bags of pater families. To Frost this was no blow, since he had deliberately invited the drastic measure by declaring he would not accept a penny of his wife’s father’s money and advising the old man to save up his dollars against the day when he should need them with which to buy the masterpieces of one A.B. Frost.

Frost’s success was mentioned in an article about the income of illustrators as reported in the Fort Worth Daily Gazette (Texas), April 11, 1887:


Arthur Burdett Frost, who got a fortune with as well as in his wife is now the strongest man in picturing American contemporary life. He, too, makes about $8000, but he has a separate income of $40,000 a year.

Frost’s sketches (below) were featured in the November 1891 issue of Art in Advertising. 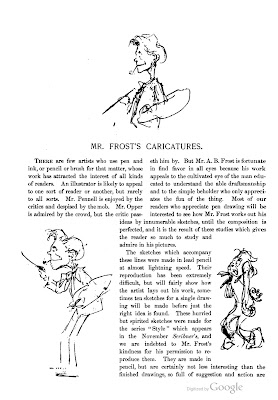 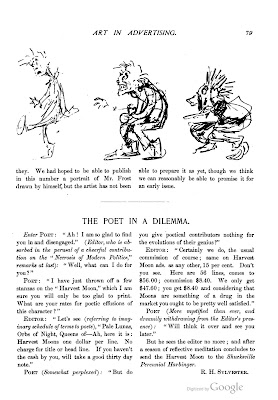 
On a sketching trip south Frost called on Harris in Atlanta, and the two men—both different redheads, both modest and strong-minded—traveled companionably together into the Georgia countryside. The outcome was a lively, longtime correspondence and a fruitful partnership. Harris’s one complaint about Frost’s illustrations in their first collaboration, Uncle Remus and His Friends (1892), was that there were not enough of them, a deficiency Frost remedied in the remake of Uncle Remus: His Songs and His Sayings (1895; 1921 revised edition is here.) This classic edition, which Harris famously dedicated to Frost (“The book was mine, but you have made it yours, sap and pith.”), boasts 112 small drawings spotted tellingly through the text.