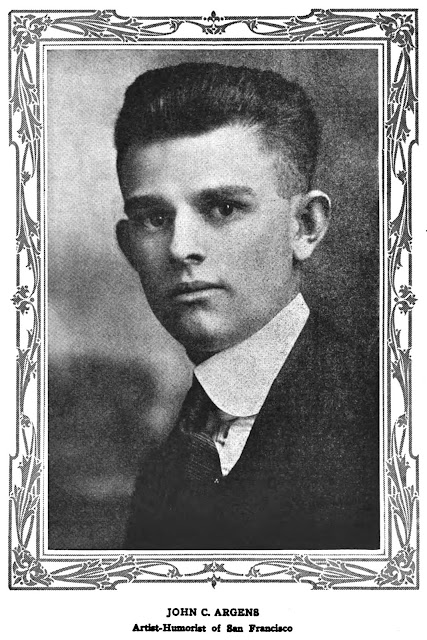 John C. Argens was born in Carson City, Nevada, on February 16, 1897, according to his World War I draft card.

The 1900 U.S. Federal Census recorded Argens, his parents, Henry and Arzelie, and his older sister Fannie, in Reno, Nevada at 307 Virginia. Argens’s father was an iron molder.

In the 1910 census, Argens and his parents resided in Beckworth, California on Portola. The family later moved to San Francisco.

Argens was a medalist and graduate of the John Swett grammar school as reported in the San Francisco Call, December 21, 1912.

Argens signed his World War I draft card on June 5, 1918. He was a San Francisco resident at 283 Church Street and his occupation was newspaper artist at the Bulletin. Argens was described as medium height, slender build with gray eyes and brown hair. Information regarding his art training has not been found.

In 1918 Argens contributed to Cartoons Magazine in its January issue; in March here, here and here; and May.

Argens home address was 1907 8th Avenue, San Francisco, in the 1930 census. The newspaper cartoonist had two sons, Henry and Jack.

According to the 1937 directory, Argens was Chronicle cartoonist. The following year Argens was at 3536 Kerckhoff Avenue in Fresno, California, where he cartooned for the Bee. 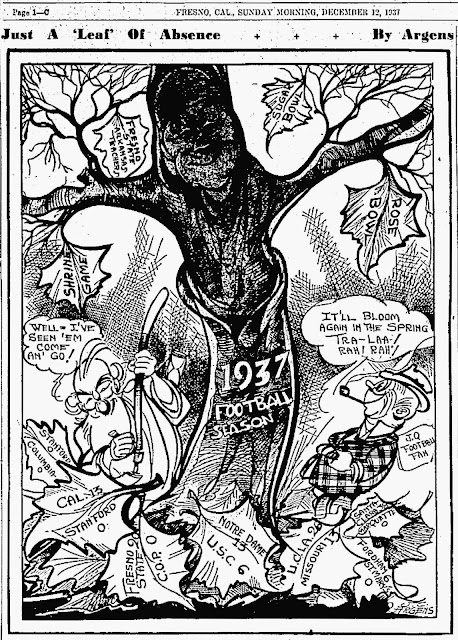 According to the 1940 census, Argens completed four years of college. Sometime after the census, Argens moved back to San Francisco. The directories from the 1940s listed the cartoonist at 1907 Leavenworth.

John Argens, 48, a San Francisco newspaper artist who formerly was a staff artist for the Fresno Bee, was seriously injured yesterday when he was hurled to the floor of a cable car in the bay city when the car’s grip locked on a cable. Argens suffered head injuries and was transferred to the St. Luke’s Hospital...

Argens passed away January 20, 1962, in San Francisco, according to the California Death Index. The 1962 directory had his address as 1390 Filbert Street.

Comments:
My special thanks to you and the blog. Due to the material that was posted on E. B. Sullivan "Sullie." A couple that had some of his art work contacted my sister and they sent us original art work, newspaper clippings etc. I am still sorting through the stuff but among the things is a letter from the Chicago Tribune that they were going to have to cancel the Bucks McKale strip and several other strips due to war time paper shortages. Bucks did run into the middle of September of 1943 in the Boston Post. During the war Sullie was editor of a newsletter for Patterson AFB (now Wright-Patterson). He drew cartoons for the newsletter geared to different groups on the base such as "Private Stuff" "Guard Gags" and others. Thanks again for providing the way to find out more about my relative. Carolyn Yancey Kent carolke5@aol.com